The funny thing about disappointment is that it only has the most tangential relationship with whatever it is people are actually disappointed in. The follow-up to this season's strong premiere drops the ball in terms of delivering on some of the most interesting plot threads introduced in "Something Wicked This Fae Comes", and it can very easily colour the episode in a negative light, but on the whole "I Fought the Fae (And the Fae Won)" delivers a very strong A-story and introduces some cool new characters that can be overshadowed by the smaller beats of disappointment.
The Light Fae are continuing to rebuild from the chaos of the season 1 finale, and the new chapter is heralded by the arrival of Blackthorn, an elder from the Fae Council, who is organising the traditional "stag hunt" in order to select a new Ash. Meanwhile, a prisoner named Sabine escapes the Fae stockade and comes to Bo for help, with Dyson and the rest of the Light Fae on her heels.

What intertwines the two stories is the reveal that Sabine is to be the "stag" of the stag hunt, meaning whoever kills her will be crowned the new Ash. Sabine wants Bo to find her lost love, a Dark Fae she was to marry, but Team Bo is more concerned with saving Sabine's life, which means sinking knee-deep into Fae politics again.

The writers have really grasped the notion of using episodic plots to inform the mythology of "Lost Girl", and then subsequently using the mythology to inform the plot. All kinds of little details from previous episodes are brought to the fore in new ways, from mentions of the Council to the Fae classism. Ever since "Fae Day", people at Critical Myth have been speculating which member of the main cast would wind up being revealed as having noble blood, but I doubt anyone put money on who it actually turned out to be. 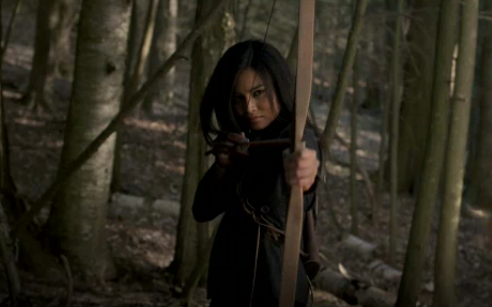 It all helps that not only is the Fae world and their politics front and centre in the A-story, but there's a perfectly good reason for Bo and company to get involved and invested in the outcome. And the stag hunt itself is pretty much the Fae society in a nutshell, summed up for the benefit of new viewers and those who need reminding: it's competitive, it's traditional to the point of being antiquated, and it's at the cost of another life. This episode was also a great introduction for Lachlan and Blackthorn, each entertaining and unsettling in their own unique ways, and no doubt we'll be seeing more of them in the future.

Where this episode felt disappointing was in the character arcs, following up on the season premiere in a less-than-satisfying way. While it's good they didn't have Bo get completely mopey and depressed like she was in "Faetal Attraction" (though the reference was appreciated) and it's entirely in keeping with her character to be so headstrong and proactive, somehow Bo managed to leap beyond that into foolhardiness.

It was mitigated somewhat by the other characters pointing out how she's pushing the issue, or how she's getting so hung up on this case because of how it's similar to her own, but it still rubs the wrong way. Dyson felt much the same way: like himself, but too much, taken a bit too far in the wrong direction. It all lead to a climax at the end of the episode that felt too forced and aggressive and lacked any kind of reasoning from either Bo or Dyson.

It's a shame: the Bo/Dyson dynamic has been one of the strongest, more interesting elements of "Lost Girl" and for the most part it's been handled in a way that didn't feel melodramatic or soapy. It's not the first time they've dropped the ball, but it stings in the face of a fantastic season premiere and a really solid A-story that set up plots and arcs for the season to come. The episode feels disappointing at first blush, because that sting in the tail fogs up a lot of the better things that happened, but it all settles into an installment that, while not the best offering, is fun and worth the watch.