The World is Dark and Broken - The Walking Dead 11x22, Faith - Review

“[The Walking Dead] ends with a really definitive conclusion for both the series and then each individual character.”
--Scott Gimple, interview with Entertainment Weekly, 25 October 2022

With only two episodes to go before the end of the series, it feels like The Walking Dead is somersaulting so unevenly through the convoluted Commonwealth plot that the show has little chance of sticking the landing. The season as a whole has been, at times, bewildering in its narrative choices, with dead ends (Leah’s arc) and sudden drop-offs (Oceanside) that frustrate any viewer who has been tuned in for more than one season.

“Faith” has as its focus Negan’s redemption arc. Ostensibly, the episode deals with questions around our faith in each other, our faith in the world, and our faith in ourselves. Maggie doubts her decision to bring Hershel Jnr into the world; Pamela fights to retain the support of the disillusioned Commonwealth citizens; and Mercer reveals a realignment of his loyalties. But, undoubtedly, the primary purpose of 11x22 is to move Negan’s story forward, towards his upcoming spinoff with Maggie. 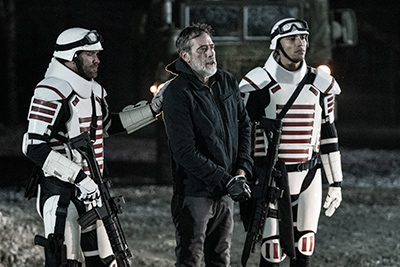 The opening montage, therefore, belongs to the erstwhile antagonist. Though we see a clip of the infamous line-up in which he killed Abraham and Glenn, the bulk of the scenes—with his late wife, with a younger Judith, with Lydia— are intended to remind us of his more humane side. This reminder is reinforced by the events of the episode, in which Negan is confronted by a version of his old Saviour self in the person of the warden at Alexandria. In the closing moments of “Faith”, Negan has made a deal to ensure the safety of Team Family, including his own wife and unborn child, and he is put on his knees before a firing squad. The warden, however, breaks the deal and lines Annie up with her husband. We are back in the opening moments of the episode, watching a man pace threateningly up and down a line of kneeling prisoners. But this time, it is Negan who is in peril, not Glenn; it is Negan’s wife and child beside him, not Maggie and an unborn Hershel. The parallel is striking, with all of the subtlety of a baseball bat to the head.

On Talking Dead for this episode, Angela Kang noted that this firing squad was the first time Negan “fully understood how his past actions had affected Maggie.” While irony and a reversal of roles are an obvious purpose of the scene, the idea that it is only in this way that Negan properly appreciates what he did to Maggie is an odd one. Empathy is an exercise of the imagination. If it were not—if it relied on firsthand, markedly similar experience—the world would be a much colder and harder place. Negan should not, if he is the man the writers would have us believe he is, need to kneel before a firing squad in order to empathize fully with Maggie. Our humanity depends on our capacity to imagine the circumstances of others, and the fact that the fictional characters on The Walking Dead evoke such strong reactions in its audience is evidence that imagination is enough. Why has it not been enough for Negan Smith, too?

While Negan reckons with his past, Eugene is on trial, in a court case which everyone—onscreen and at home—knows is fake, but which nonetheless takes up a significant portion of the episode. Daryl and Connie are on a mission through the sewers to rescue Kelly, and Carol and Maggie are looking for the kidnapped children. The most poignant moment of the episode is between Carol and Maggie, hiding in the pantry of the house where Hershel is being held. During this scene, Carol delivers a line which, for me, surpassed by some distance Mercer’s “Time to fuck shit up” as the episode’s best line. When Maggie expresses her fear that it was selfish to bring Hershel into a world like this one, Carol says, “You will always try to make the world better because of him and for him. That’s hope.”

The moment is understated, the words delivered with quiet, genuine emotion by Melissa McBride as Carol. She is not grandstanding or trying, like Ezekiel when he steps forward to save Negan, or Yumiko and Eugene addressing the court, to rouse the masses. She is comforting a friend, making her own vulnerabilities known, and she speaks not only to Maggie, but also to any parent who has contemplated the state of the world and wondered what legacy their child stands to inherit. These are the moments for which viewers are hungry in these final episodes: moments of open-heartedness and intimacy among the characters closest to their hearts. Instead, it sometimes feels like the show is scrambling to wrap up plot lines rather than emotional arcs, to hurriedly redeem Negan for once and for all rather than give Daryl, for example, the opportunity to display any emotion other than blank stoicism.

It will be interesting to see whether the next two episodes have room for the characters to properly earn the “definitive conclusion” promised by Scott Gimple. To my mind, that promise has already been broken; but I hope I’m wrong.
Twitter
BotonSocial por: SocialEmpresa
Category: TV Reviews & Recaps