SciFi Vision | All Reviews | Television Reviews | Advance Review: The Power of the Doctor - The End of an Era

Advance Review: The Power of the Doctor - The End of an Era

Published: Sunday, 23 October 2022 17:58 | Written by Jamie Ruby
Note: I’m going to write this fairly spoiler free and leave out the big things, but if you want to stay completely spoiler free, read after it airs tonight.

Tonight, BBC America airs the new special “The Power of the Doctor,” which aired earlier today in the UK. The episode marks Jodie Whittaker’s final episode as the Doctor. In the feature-length episode, the Doctor battles not only her greatest enemies, but her arch nemesis, The Master (Sacha Dhawan).

If you’ve read my reviews, you know I love the series, and there is a lot to love about Chris Chibnall’s final episode. The episode has tons of shock and awe, but unfortunately, some people may think that’s all it is. “The Timeless Child” really split fans in a way an episode hadn’t in a long time, maybe ever, and while this episode doesn’t rewrite history or retcon anything (thankfully) it does feel a bit like Chibnall is throwing everything in to make an epic end. The problem is, it’s two-sided. It’s the centennial special, and not only his last episode, but Whittaker’s as well, so he should be pulling out the big guns and making a bang. The problem is, the Daleks, the Cybermen, and even more so, the Master, are huge villains in Doctor Who mythology, and they pack so much more of a punch when they are used sparingly, because they are something that as a fan you look forward to. The issue to me is they’ve been overused in the series so much lately that they don’t feel as special anymore. The episode doesn’t shine as much as it should, because that makes it feel a bit repetitive. That all being said, even though it does feel like a lot is packed in there, I personally really enjoyed this one. It does have a follow through and is vastly superior to the Flux storyline that a lot of people (at times myself included) picked apart. It has a beginning, middle, and end and doesn’t jump all over the place like the former. 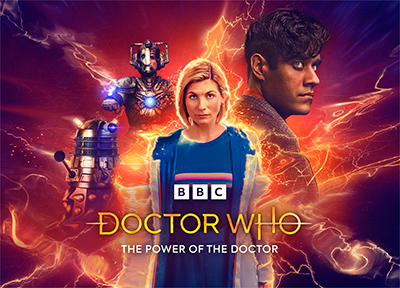 The episode also has tons of familiar faces, and thankfully some of them weren’t even spoiled already, which makes it that much better and is why I’m not naming those that weren’t previously advertised.

The addition of Ace (Sophie Aldred) and Tegan (Janet Fielding) was pretty cool, and there were a lot of throwbacks for fans. The only negative I do have to mention, is with bringing in so so many different characters, once again Yaz (Mandip Gill) feels vastly underused and forgotten. I did, however, really enjoy her taking charge and making decisions (and locking Dhawan out of the Tardis was a brilliant moment).

Story-wise, it is a thrilling adventure for the most part, and while there are some things that are a bit confusing (like the forced regeneration doesn’t make a whole lot of sense), it keeps the pace and the stakes. There are multiple threats going on simultaneously, and I do like how the characters divide and conquer.

There are a lot of really great moments that may on retrospect play a big campy, but as a fan, I found myself loving it. I went through a whole gambit of emotions watching the episode. It had me laughing at times, crying at times, cheering at times, and at other times completely shocked. Overall, it did what it should do, it made me feel. Even if there were some moments which were over the top or done purely for shock value, it still overall worked for me.

Tonight’s episode marks the end of an era. I didn’t think I would find it as hard to say goodbye to Whittaker’s Doctor as I did, but when the cloister bells rang, I knew I would miss her.

And while I can’t say I was completely shocked at the ending (I blame the internet) I still found myself literally yelling out loud at the final moments, which will be talked about for a long time to come. If I couldn’t wait to see the 60th special before, I’m even more amped up now. "The Power of the Doctor" premieres tonight on BBC America.
Twitter
BotonSocial por: SocialEmpresa
Category: TV Reviews & Recaps