This show has never feared what's coming in the future for its characters. A lot of this episode addresses that notion, particularly with regard to Alicia. She's prompted to look at expensive houses because her landlord might evict them from their luxury condo. Her kids are soon to be in college. If she goes through with the divorce from Peter (and that's looking more and more remote), that's a significant loss of income despite her position as a high-powered lawyer.
The writers also pulled a fast one over me with all the shadowy stuff involving Caitlin and the firm's power play politics. It was nothing of the sort, with her being neatly escorted out of the narrative with a swiftness that I haven't seen in a long time. It's a little too neat, and parallels a lot of what Alicia went through in the time that pre-dates the show, but it proves quite effective. I don't know what else is in store for everyone here. They don't seem to stay in the same place for very long.

Looking at the present time, though, the firm once again has to deal with the return of notorious wife-killer Colin Sweeney, embroiled first in what looks like a business takeover scenario, then having to battle sexual harassment issues from a former employee. Sweeney's return doesn't sit well with Alicia, and it's very interesting to see her squirm every time they're in a room together or when he gives testimony. Especially when the issue of child paternity and what the definition of sex is becomes involved here. The show plays with Sweeney's oily nature a bit too much as theatrics for my taste so the final twist that the victim and Sweeney were in on the case together wasn't that big a surprise to me. There were suspicions on my part from the get-go, and they were cemented when it was shown that both parties seemingly perjured themselves in open court without telling their attorneys about it. Playing mind games has always been Sweeney's specialty, and this was no different. 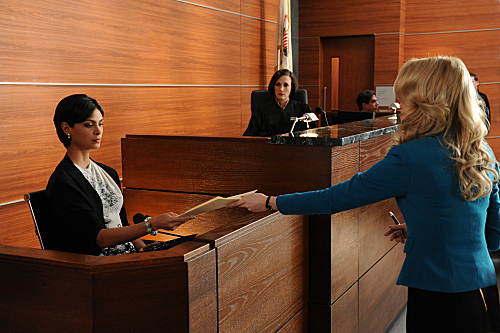 It was what Lockhart-Gardner and Alicia signed up for when they took Sweeney on as a client. He isn't the only thing on Alicia's plate to deal with. Her landlord's eviction notice gets her to look at her old house in the suburbs, the house she swore earlier in the series she'd never return to. And yet, it might just happen if we're to believe the final images of the episode. Her kids seem okay with moving back home. The only question is if she can afford it, and that's a big complication at her work. Though it comes from circumstances that are very much not in her control.

All that buildup from last episode is wasted by taking Caitlin out of the mix. It had looked like she was scheming with her uncle to move in on Alicia's territory. She was made full litigator by Diane, and some of the shots from last episode indicated that Alicia should watch her back. Turns out Caitlin is pregnant, getting married, and quitting the firm to raise her family. She's committed to taking this course in her life, and I admire her conviction in sticking to her guns. Alicia and Diane try to talk her out of it because they don't want to lose an asset like Caitlin, but she's made up her mind to walk away. She'll be missed because in her short time on the show, she'd proven to be really good at her job. The way she got that job was a bit suspect, but that doesn't matter now. Lockhart and Associates will have to survive without her.

Peter's part in the episode feels extraneous with all that's happening on Alicia's side of things. It's quiet, but effective though. What starts as a seemingly innocuous investigation into fraternization among colleagues while in office becomes a case of inadvertent (or perhaps intentional) racial bias on Peter's part. He promoted Cary over three other attorneys with more experience and seniority at the SAO. The other three attorneys happen to be black. Peter takes a harsher stance on one of the attorneys who violated his new anti-fraternization policy not because he is gay, but because he is black. It's a low-key storyline that organically progresses from one point to the next, then turns on a dime.

This is the kind of thing that makes the show worth watching. Peter may not be consciously aware he's doing this, rationalizing that he's more comfortable with Cary than everyone else, but there is room to question whether he might intentionally applying the bias to his staffing process. He made a decision in the previous episode to go for a higher office by compromising his principles, and it's possible he is doing that here as well. It could be a bump in the road, or something that's part of a long-term pattern. You just don't know, and the show is always better when it operates in such moral gray areas.