I had promised myself I’d stop using movie analogies when reviewing “Person of Interest”. I’d give myself a chance to stretch and find new ways to sum up the show. But the producers obviously were onto my plan. Perhaps they actually have a Machine, but one that anticipates the viewers’ every thought. How else to explain “Baby Blue”, which I can only describe as their take on “Three Men and a Baby”, with a decidedly lethal twist?
This episode is the story of two disparate threads, independently serving the needs of plot and arc before crashing together to devastating effect. After closing out the previous episode, Elias moves off-camera again, pulling the strings that get his mobster dad released from prison. Carter offers protection, Moretti scoffs, until Carter and Reese ambush Elias’ ambush.

Carter’s offer proves just a touch hollow, as it involves only her and Mr. Geico, I mean, Det. Szymanski. (Mark McGlone really needs to vary his look!) I like the dynamic that’s now been established of the few good cops trying to operate against the insidious infiltration of HR. The imbalances from “Get Carter”, when the corrupt seemed poised to take over the city, have been addressed. HR is powerful, but still has limits on their intel, as their approach to Fusco to ferret out Moretti indicates. Fusco’s continued reluctance to play ball is sure to have consequences. I even foresee Reese ordering him to burrow deeper when the time comes to take on Elias. 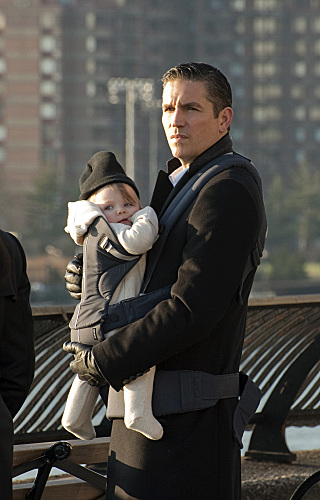 With Reese otherwise engaged, it falls to Finch to investigate the latest number. Finch has been learning his lessons well. Watching him think on his feet as he’s confronted with a new-born, he actually looks like he’s enjoying himself. It’s a long way from the hapless, incompetent protector of the second episode. This time, he can recognize the threat and spirit the little tot to safety.

The baby provides some amusing life lessons for our evolving social misfits. Finch discovers that books may be good for a baby’s mind, but not for its crib. Reese learns that baby-proofing your lair includes securing your grenades. (Sorry, John. You don’t get a pass for it being tear gas.) The image of Reese toting the baby to their meeting with Carter was priceless. Her skepticism at their parenting skills proves well-founded. They do manage to lose her back to the kidnappers shortly afterwards.

Following the established pattern, the casework itself is fairly routine. The mother is traced, the team tracks back to her family, and on to the family of her boss. Reese strong-arms the boss, and the wife is revealed as commissioning the mother’s murder and the kidnapping. But then comes the twist. The kidnappers are incommunicado and untraceable.

The final act builds on the structure of the previous episode. Rather than just a closing reveal, Reese is forced to call on Elias to track down the baby. The psychological interplay is intricate and telling. Reese evokes Elias’ mother to help gain his cooperation, Elias coldly relies on Reese’s humanity to extract Moretti’s location. (The episode title is a not-so-subtle pun on that chilling finale.) Elias is brought back in a way that feels organic, and winds up fracturing the team in a way that remains true to all of their established characters. It leads to another ambiguous ending, a la “Cura Te Ipsum”. We’re left assuming Moretti’s met his end, but I’m not so sure Elias doesn’t have some other sinister use for him.