SciFi Vision | All Reviews | Television Reviews | Advance Review: Devs Is a Bizarre Sci-Fi Thriller That Will Keep You Wanting More

Advance Review: Devs Is a Bizarre Sci-Fi Thriller That Will Keep You Wanting More

Thursday the new sci-fi thriller miniseries, Devs, premieres its first two episodes on FX on Hulu. The series comes from Alexa Garland, the creator of Ex Machina and Annihilation, who also writes, directs, and serves as an executive producer on the series.

At a cutting-edge tech company called Amaya, Sergei (Karl Glusman), who’s been working in the AI department, is invited by his boss, Forest (Nick Offerman), to join the highly secretive Devs team. When he doesn’t return from work, his girlfriend, software engineer Lily Chan (Sonoya Mizuno), investigates the mysterious development division of the company and the man behind it, who she thinks may be behind his murder. In doing so she uncovers more than she expected. 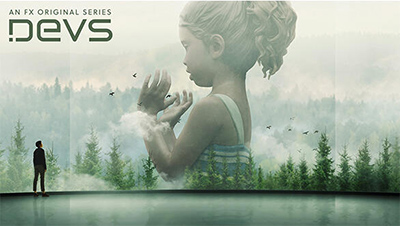 Devs is a show that is hard to describe. Within the first two episodes, the work in the division is not really discussed but rather left for the viewer to figure out for themselves.

Regardless, the characters are interesting and fleshed out. Following Lily as she refuses to back down on her quest for answers keeps you guessing, and learning Forest’s motivations is just as compelling. Both performers work really well in the series. I was especially delightfully surprised by Offerman, who I have previously only seen in comedic roles. Zach Grenier as Kenton, head of security at Amaya, also stood out.

The visuals are definitely unique and often bizarre. The first look at Amaya reveals a huge statue of a little girl, Forest’s daughter who has passed. The Devs division itself is completely shrouded in mystery and only accessible via a floating elevator to an unbroken vacuum-sealed lab. It’s quite beautiful, even if you’re not quite sure what you are looking at. 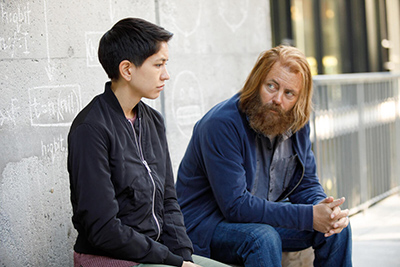 Although I’m not entirely even sure what I’m watching yet, I am fascinated in finding out the rest of the narrative. Although being able to binge the episodes would be appealing to me, this is the kind of show that giving you time to digest what you are watching will likely not be a bad thing.

The first two episodes will be available Thursday on FX on Hulu (free for members of Hulu), with subsequent episodes dropped each week for a total of eight episodes. If you’re looking for a gripping sci-fi series which will also make you think, be sure to check it out.
Twitter
BotonSocial por: SocialEmpresa
Category: TV Reviews & Recaps