“The Timeless Children,” part two of the Doctor Who season finale, airs tonight on BBC America. In the episode, written by Chris Chibnall and directed by Jamie Magnus Stone, the Cybermen are ready to hunt down the last few remaining humans as the Master (Sacha Dhawan) promises to reveal the truth to the Doctor (Jodie Whittaker). With the Doctor trapped, can her friends Graham (Bradley Walsh), Yaz (Mandip Gill), and Ryan (Tosin Cole) make it out alive? Is it the end of Gallifrey forever? Many lies are exposed, and it will change the Doctor forever. 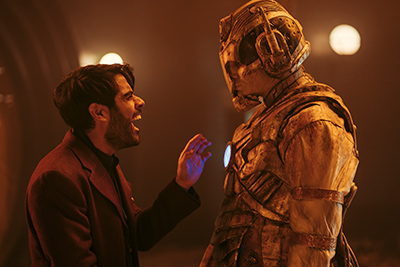 The Cyberman story has been stretched out to three episodes to come to quite an epic conclusion. There is a lot going on in the story, with the companions trying to escape the Cybermen while the Doctor is trapped by the Master. The episode is filled with edge-of-your seat action and doesn’t stop to take a breath. The story is one of the best of the season and moves really fast. I love how they have weaved together the Cybermen, the Master’s plans, and all the backstory given in the episode into one cohesive story.

In this episode, the three companions once again step up, with Graham often taking the reins. I have really liked watching his character take charge these last couple weeks. Also, his conversation with Yaz was very moving. All three of the friends all had something to do this week and were featured well. Ko Shamus served as another important piece, and Ian McElhinney is excellent in the role.  There is also a surprise scene with another character who I was really happy to see again, even if briefly. 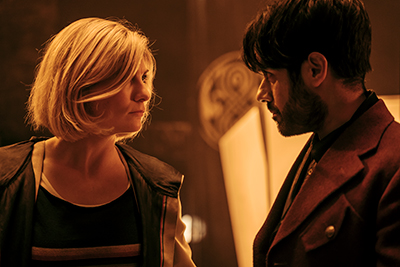 Patrick O’Kane as Ashad is a formidable foe, as he and the introduction of the Cyberium have taken the Cybermen story in a different direction, which I have enjoyed, but my favorite part of the episode was with the Doctor and the Master. Whittaker and Dhawan were so great to watch face off in the episode. You could easily feel the tension in the air. The Master took such pleasure in trying to cut the Doctor down, reveling in her misery. Dhawan has played such an amazing version of the character this season, rivaling the other greats. His emotions are always bouncing all over the place, and it’s a joy to watch the actor and try to guess what the Master will do next. Watching Whittaker as she refuses to back down is also always a delight to watch. 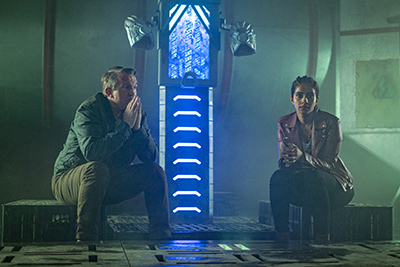 Tonight, although some things from the season aren't addressed, many truths are revealed and questions answered, and by the end you will be questioning what you know about the series. Some fans will undoubtably be upset at Chibnall for rewriting pieces of the history of the Time Lords. Granted I have not seen much of the classic series, but I embrace the huge changes Chibnall has made this season shaking things up. I love seeing the story spinning this way and that and never knowing what’s to come, and the series has really been flipped on its head this time, changing the mythology we know. The season ended on an interesting note that I can’t wait to see the conclusion of, and thankfully there is a festive episode coming up before the next season.
Twitter
BotonSocial por: SocialEmpresa
Category: TV Reviews & Recaps