This Sunday, the popular series, The Walking Dead, returns to AMC. The episode, “Lines We Cross,” written by Angela Kang, picks up months after the season finale. Lines are still drawn, and dealing with the fallout of The Whisperers, our group does their best to stay away from Alpha (Samantha Morton)’s territory, after so many of their own have been killed.

Winter is over, and now on the beach, the group does what they can to get everyone in top shape for fighting what’s to come, practicing and learning formations. Will it be enough?

Things become tense when the children find something unexpected that could mean more trouble is coming. 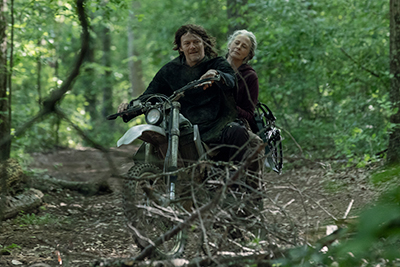 There is also something headed their way that could have a huge impact on everyone.

The episode works to bring fans up to speed and to set the stage for season ten. In the premiere, every character has their moment, as we see something approaching them from varying points of view.

Directed by Greg Nicotero, the episode has a wonderful cinematic quality and scope.

Story wise, last year after Kang took over, the caliber of the scripts definitely increased, and this season looks to be no different. The episode got me really excited to find out what’s coming and what will play out between our group and The Whisperers. 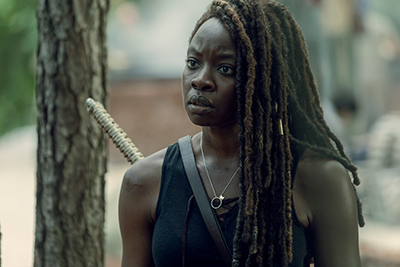 The best scene in my opinion, however, by far, is a conversation between Carol (Melissa McBride) and Daryl (Norman Reedus). She is not comfortable staying after what transpired at the end of the season, but he wants her to slow down. The two discuss their friendship, and it’s just a really special moment.

There was, however, also a great emotional scene between Michonne (Danai Gurira) and her children in the episode.

Overall, the premiere is balanced and enjoyable. It’s a fantastic start to season ten, and if the rest of the episodes follow in its footsteps, this season could be one of the best yet.
Twitter
BotonSocial por: SocialEmpresa
Category: TV Reviews & Recaps