On the latest episode of The Walking Dead, Daryl and Connie attempt to save Lydia and Henry while the Kingdom meets some new allies.

For as much as I’ve been annoyed by Henry and Lydia, I found this week’s episode to be fairly enjoyable - except for the end, but we’ll get to that.

Lately the Kingdom story hasn’t been as integral to the episodes as the rest, but this week that starts to change as the groups are merging together at the fair. It’s going to be great to see some of them back together again, at least for a while, and we at least get a taste of that.

The other part that was enjoyable was the Highwaymen. Having not read the comics, I had assumed that the territory sign was from the Whisperers and that the Kingdom group would just encounter more of the same. I was happily surprised that they were something different. It’s not often lately that the survivors find a group that seem to be on the surface trustworthy - or at least willing to live peacefully at any rate. I am assuming they may come together to give help with Alpha and the Whisperers, if it’s needed, but that’s yet to be seen. Of course the one thing about adding a bunch of new characters, is it also adds a bunch of new redshirts. Also, Carol’s way of bringing them in to the fold with the promise of movies was priceless.

As for the main part of the story, while there was some annoying parts, like Henry and Lydia pretty much talking about anything, there was a lot of action - and good action at that. It’s always fun seeing Daryl taking down an enemy, but I also enjoyed Connie’s approach with her slingshot. She can be deadly.

Those scenes in the apartment were pretty non-stop until Daryl pushed Beta down the elevator shaft. It was predictable, but satisfying. That feeling of satisfaction quickly dropped to being a feeling of "ready to throw the remote at the TV" when Beta stood up, which is not only one of the worst tropes ever, but utterly unbelievable. It’s suspect he’s even alive, but there is no way he should have been able to just walk away from that so quickly. The episode was good until that point, and the writers just had to ruin it.

In the end, Daryl finally agrees to help keep Lydia safe permanently. Whether it’s because of his own morality, Henry’s feelings, or Connie’s urgings, I’m not sure. I just hope they don’t stay separated from the other groups for long. Hopefully their stop in Alexandria will at least be more than a few moments. Though I admit, Daryl and Connie’s friendship is growing on me, Henry and Lydia’s continues to irk me to the point I wish they would just kill them both off. 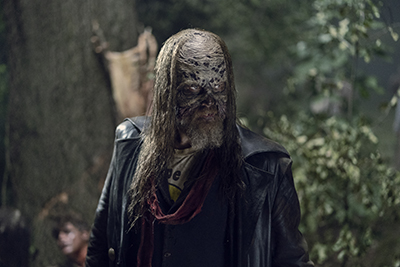 As Daryl, Connie, Henry, and Lydia escape the Whisperers, Daryl makes the decision that they can’t go back to Hilltop and put his friends in danger. Henry wants to go off on his own with Lydia, but Daryl tells him to think of his parents. Daryl wants to go one way, but Connie tells them to follower her. Dog ignores Daryl, so he reluctantly follows the others.

Back at their camp, one of the Whisperers is dying and Beta says to tell his wife he’s going to turn.

Beta says to get a unit together and that Lydia will walks with them again or they will all walk with the Guardians.

Meanwhile, while Carol and Nabila are getting ready for the fair, Jerry, Diana, and a few others return to the Kingdom without their armor. Jerry tells them that they ran into some men on the highway who gave them a letter to bring back to the Kingdom, telling them that they have to pay a toll, or they won’t let anyone into the fair. They also took his sword. The fair could be their last chance, and they have to keep the road safe for the other communities who are coming, so Ezekiel says to gather their fighters. 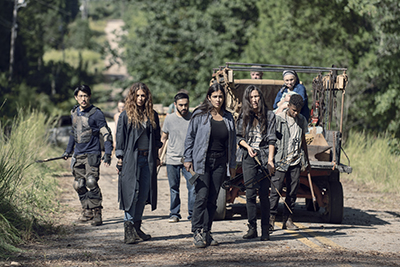 On the way to the fair, Tara’s group comes across a tree blocking the road and they go to move it. Kelly is worried about Connie, but Tara tells her that she is safe, because she’s with Daryl. Yumiko comments that it’s the other way around.

Connie leads the group to an apartment building. They can use it as a chokepoint. Daryl agrees, because they can go up to higher ground where the walkers can’t go, so they will be able to separate the living from the dead.

Lydia is worried that they will just be trapped, because the Whispers will send Beta rather than an army if they don’t have to. Daryl questions that Beta is their best and says that they will kill him first.

Carol, Ezekiel, Jerry, and the others get a look at the Highwaymen from the bridge; they have guns. They could take them out from the bridge, but Carol comments that they didn’t exactly give a death threat and could have been violent but weren’t. Diana says that they technically only said the visitors wouldn’t be allowed to pass. Carol thinks that they should talk to them civilly first. If it doesn’t work, then they will kill them. 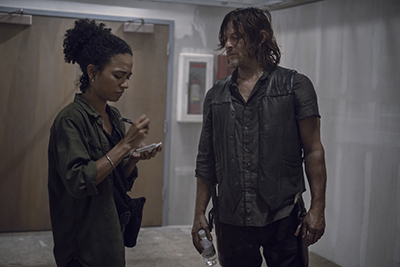 Daryl’s group goes into the apartment. Daryl notices the stairwell is already barricaded. Connie pulls back a piece of wood to reveal a hidden stash in the floor. Daryl realizes that Connie’s group used the apartment to hide out in in the past. Planning, Daryl says that there are only two ways up to the apartment, but it’s been barricaded too well. They need to make a hole so the Whispers can get up. He tells her that after they kill them, they are leaving without Lydia. He doesn’t want to put their friends in danger. Connie writes to him that Lydia has no friends.

The Kingdom fighters and the Highwaymen meet. The leader, Ozzy, threatens the Kingdom if they don’t pay, 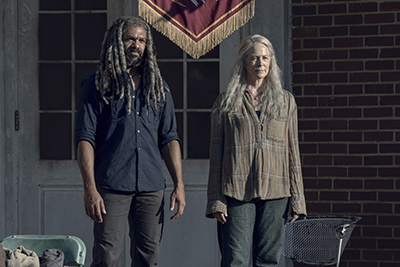 but Ezekiel says that they can’t pay with what they don’t have. Ozzy says that they have food and clean water, but Ezekiel tells him that they need it. What they want would threaten the Kingdom’s future. They could fight them, but instead Ezekiel says that instead, he will offer them a job. The Highwaymen will protect their roads so the others can get to the fair safe, and in return, they will give them access to the Kingdom and the fair. It’s a trade market, which is the point. Ezekiel asks them what good it is if what they can’t trade what they steal for what they need. Jerry also wants his sword back.


Their leader laughs, saying they will need more than that. Carol calmly asks him when the last time was any of them saw a movie?

Henry has made Lydia a spear, but she won’t be able to kill her people. Henry tells her that he will try not to kill anyone if he can help it. She asks why he came back for her and tells him that him saving her was stupid, because it makes Alpha look weak, and she will not let her go. The two kiss, but Daryl sees them and interrupts. 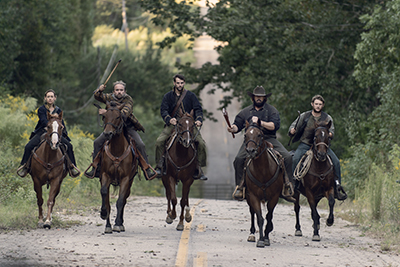 While they are moving the tree, Tara’s group is attacked by walkers. Suddenly the Highwaymen show up on horseback before they can be overtaken. Ozzy tells a confused Tara that they are their escorts to the fair.

The group of Whisperers is coming. Daryl shoots an arrow at the group and hits the one human looking one, who is the man who was recently turned. While they finish with the barricades, Beta sees the blocked stairs and tells one of the other Whisperers to take half the group of walkers and lead them out.

The one Whisperer says that the walkers can go no further. Beta says that they aren’t meant to, because it’s a trap. They humans continue anyway.

Daryl locks Lydia in a room to stay safe and tells her that if she can’t fight, she will only get in the way. He locks Dog in with her and says that if anyone gets in Dog will take them down, and then she is to run. Lydia thanks him. 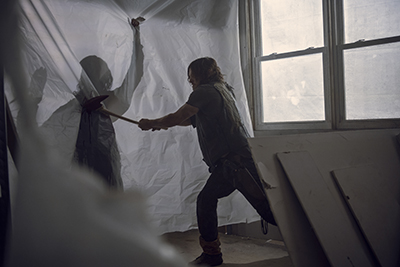 A few Whisperers make it upstairs. Henry knocks out one, and Connie stops another from grabbing him from behind with her slingshot. A few more come at Daryl, including Beta, using a door as a shield. He leads them away and Connie is almost hit with a knife by another. A Whisperer jumps at Henry while Daryl axes and kills another one. Beta goes after Daryl.

Listening to it all, Lydia grabs a crowbar and goes out, calling for Henry, who gets stabbed in the leg by the Whisperer, who Dog attacks.

Connie fights with another Whisperer while Henry finishes off the one that stabbed him. Connie pulls out a drawer tripping the Whisperer, then stabs them.

Lydia rushes over to Henry who apologizes for having to kill the man. She says it’s okay and that she is sorry; she hates this. He does too.

Connie comes to their aid while Daryl cuts another Whisperer’s throat. 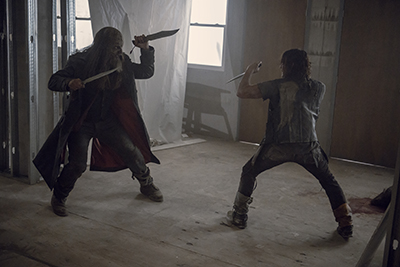 Beta comes after Daryl, asking where Lydia is, but he doesn’t answer. They fight. Beta eventually gets Daryl’s neck over a table saw. He asks again where she is, but Daryl bests him and gets away from the saw. They both fight some more, and then Daryl runs and hides in the floor compartment. When Beta walks toward the elevator, telling Daryl they mean nothing to him, and he just wants the girl, Daryl runs up behind him and pushes him into the elevator shaft.

After he falls, Daryl leans over to look, and then he spits down at him.

Tara and the others arrive at the fair. The Kingdom welcomes them and the Highwaymen. Tammy and Earl have decided to keep the Whisperer's baby.

Tara greets Ezekiel and Carol, who asks her where Henry is. Tara realizes that Daryl isn’t there yet either; they were supposed to meet them there.

Connie shoots out windows on the cars outside below with her slingshot to draw the walkers out. 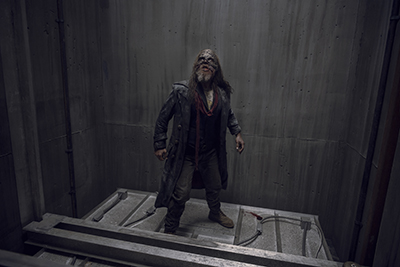 Meanwhile, Daryl has been fixing up Henry as best he can. When Connie comes in, he tells them that they will go to Alexandria to get Henry’s leg fixed, because it’s closest. Henry protests about the danger, but he says they won’t stay. He says that after that they will move on and find a place - all of them.