The episode did have some good action this week, but most of what sticks out to me is how annoying Henry still is. Everything could have been avoided just by him staying home, but of course, he thinks he’s a hero. He can’t even track without being spotted. The other thing, is that the majority of the episode was super predictable with him. I’m blaming the writers on this one.

I am interested a bit more in Lydia this week, however. It seems, at least to me, that other than telling Daryl and the others there were only a few Whisperers, that she told the truth. I think she really does want out of the situation. I feel like what she told Alpha was pretty much the bare minimum, and she only said anything because she’s scared of her mother. Although, Alpha trying to force her to kill Henry, doesn’t really show her if she has feelings for him. I’m guessing Lydia probably wouldn’t have wanted to kill anyone in cold blood.

Speaking of which, the scene with Alpha killing her challengers was an intense one, and I like that it was different. It was creepy as hell when she handed the man his girlfriend’s head.

As for Alexandria, I was glad that Michonne is stepping back and giving people a choice, which is what she was supposed to do in the first place: offer her suggestions and let the council vote. I also appreciated the fact that it seemed to be Judith who made her change her mind. Obviously, she’s not about to let out Negan, but Judith at least helped her to see that she has been different since Rick died.

Speaking of Judith, she continues to be a delightful character. When Cailey Fleming first came on screen, I assumed that she would be annoying and unnecessary to the plot, as the character pretty much was as a baby, but it’s been the opposite. She’s always got something to say, which is usually wise and often sarcastic. As a child she sees a different side of things and wants to see the good in Negan, whether it’s present or not.

Although I never want Negan out of his cage, I can admit I would kind of enjoy seeing him kick Alpha’s ass, or even really the opposite. Either would be a fun fight to watch.

Lastly, at the end of the episode, Daryl camouflaging himself as a walker/Whisperer was really smart, as while they probably know the people around them, they likely wouldn’t remember every dead face. I would also think that they would have to change skins after a while from the stench of death. I think that maybe hiding this way could be something the others could adopt as a way to completely infiltrate the Whisperers and stage an attack. 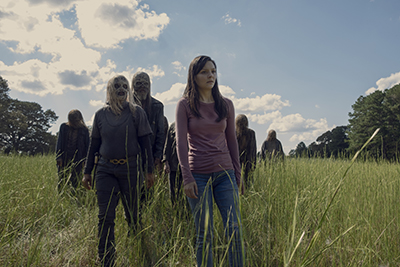 Lydia talks to her mother Alpha about what she saw at Hilltop, not giving her much. She tells her they only have basic weapons. When Alpha asks her why Daryl wanted to help her, she says that she lied and pretended she needed help. She does, however, tell them that they shouldn’t cross her. Alpha only seems interested in information from her.

Meanwhile, at Alexandria, they have a council meeting. Michonne is pissed off about the others setting up the relay for radio communication, but not everyone agrees with her. Siddiq tells the others that she turned down involvement in the fair on their behalf. Most of the people want to go to the fair and help the Kingdom with trade, but Michonne thinks it’s too dangerous. She’s willing to give them help, if they come there, but Carol refuses.


Gabriel thinks they could have a vote, but Michonne would just veto it. She’s in control of security but is running everything. Michonne basically tells them that the only thing that matters is that Alexandria is safe. After having lost Jesus, Aaron backs her up. 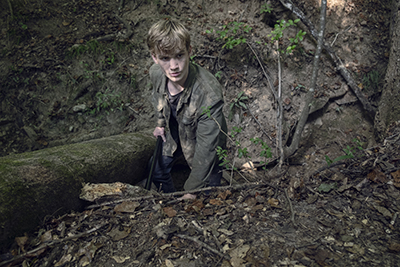 Gabriel is upset about the meeting but doesn’t want to talk about it with Rosita. They talk a bit about her pregnancy, and she says that she will understand if he doesn’t want to be a part of it.

Meanwhile, Henry has gone off on his own to find Lydia and is caught and captured.


After being threatened by Beta, he admits he came to save Lydia.  Lydia smacks him for being stupid and coming back for her, seemingly for her mother’s benefit. Alpha tells her pack that others could be coming and, they need to prepare.

Eugene comes to talk to Gabriel and gives him some charts and things of his reasonings why he should stay with Rosita. He thinks he should raise Siddiq’s baby with her. He admits to Gabriel that he is in love with her, but she loves him, and he shouldn’t take that for granted.

There are hundreds of people in the Whisperers’ camp without masks on. 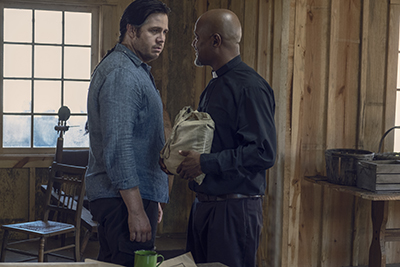 Back at Alexandria, Michonne talks to Negan, wanting to know why he came back. She thinks he only came back because there was nothing left for him. Negan says he has changed, and he could be a sounding board for her. He says she eventually will lose control of everything. He knows a lot of what has been going on by listening through the window. She says if he just came back thinking that she would listen to him it wasn’t worth it. She catches Judith listening from outside. She says that she will have him tied up while they fix the lock and for someone to cover the window.

Daryl and Connie follow Henry’s footprints in the woods. They know he’s caught up with the Whisperers. 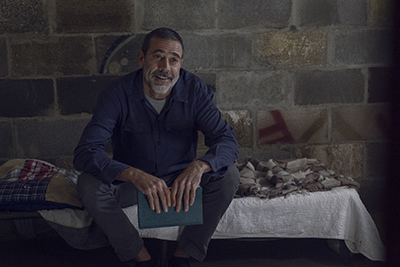 Back at the camp, Beta skins the head of a walker.

A male Whisperer questions Alpha for returning for her daughter when she never does for anyone else; she put them at risk.


Alpha defends her decision by saying that Lydia got information from them.

He challenges her leadership, but she knows that it isn’t really him that wants to challenge her, but rather his girlfriend.

The girlfriend admits that she disagrees with what she did but doesn’t want to fight her.

Alpha decapitates the woman with a garrote and hands her head to the boyfriend. She tells him not to cry; crying makes you weak. Then she stabs him. 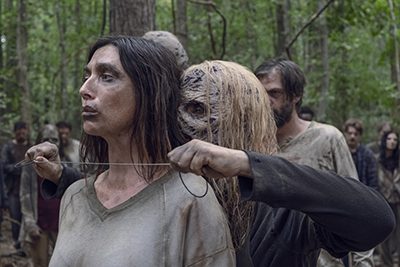 Michonne talks to Judith, upset that she’s been talking to Negan. She explains to Michonne that Negan listens to her when not everybody always does. Michonne calls him a monster and tells her that she doesn’t know what he’s done and that he’s killed people. Judith says that he is a human being and has changed. Michonne tells her people can’t change, but she asks why not, because Michonne did. Michonne tells her to go to her room while she contemplates what she's said.

Alpha tells Beta that no one has challenged her in a long time, but he says that sometimes it’s good to remind them she is the leader.


She tells Beta about when Lydia was young and almost died from suffocating from plastic wrap. She waited until the last moment to save her, and then hit her, so she wouldn’t do it again. She says that you have to do whatever you have to do to protect those you love, even from themselves. 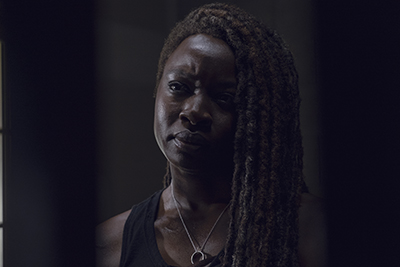 Beta tells her that maybe Henry can be of use, because she needs to know if Lydia has any feelings for him.

The other Whisperers put the dead bodies out for the walkers to get.


Meanwhile, Daryl and Connie are watching them.

Michonne comes to see Aaron and thanks him for backing her up but says that she is going to put the fair to a vote. They created the council so that they could vote on things. She doesn’t agree it’s safe for them to go with the Whisperers out, but it’s their choice to make.

Beta brings Henry over to Lydia and Alpha. Alpha gives Lydia a knife, telling her to kill him, or Beta will kill both of them.


She hesitates, but in that moment, a bunch of walkers come out of nowhere and attack. The Whisperers struggle to get their skins back on quickly, so the walkers will leave them alone. Some people get killed. 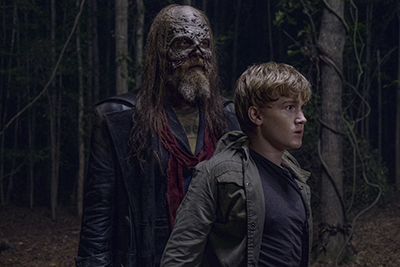 In the confusion another “walker,” Daryl, comes up and grabs Henry telling him it’s time to go. Henry won’t leave without Lydia, so he pulls them both along. Connie is there as well.
Twitter
BotonSocial por: SocialEmpresa
Category: TV Reviews & Recaps