In tonight’s episode of Doctor Who, entitled, “Kerblam!” the Doctor (Jodie Whittaker) receives a mysterious package asking for help. She, Yaz (Mandip Gill), Ryan (Tosin Cole), and Graham (Bradley Walsh) travel to a warehouse on the moon of Kandoka, where Kerblam!, the galaxy’s largest retailer, resides.
The episode, written by Pete McTighe and directed by Jennifer Perrott, guest stars Julie Hesmondhalgh and Lee Mack. 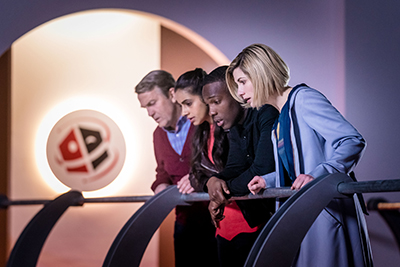 The theme of the episode deals with technology and how perhaps we rely too much on it. The idea of so much being automated really makes you think about the way we use technology for so much and don’t interact with people like we used to, or probably as much as we should.

The story was excellent this week and had a couple surprising twists. There was great action, but also  emotional scenes.

As always, the episode also looked fantastic. The robot “teammates” were an interesting design.

We didn’t really get much character development in the episode, but there were a lot of fun interactions. I also liked how the characters were split up, each dealing with the problem from different ends. 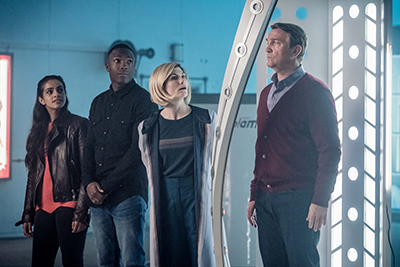 One again, the cast for the episode was pretty small. It continues to give the episodes I think a more intimate feel and bring the viewer right into the action. It also helps that the guest casts have been phenomenal this season, and tonight’s episode was no exception.

Julie Hesmondhalgh as Judy Maddox was a lot of fun. I enjoyed her quirky personality.

I especially, however, got a kick out of Lee Mack as Kerblam! worker Dan Cooper. I already knew Mack was an exceptional comedian, but he played a really relatable character in the episode, an Everyman working for his daughter’s education. He and Gill meshed really well. 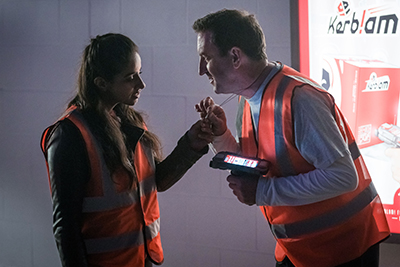 The episode to me, more than some of the others this season, was reminiscent of previous seasons. There have been many robot episodes on the series. This episode particularly made me think a bit of “Voyage of the Damned.”

Once again, Doctor Who brought it. It’s a well-constructed episode with a message at the heart of it, but also a terrific adventure. This season continues to be outstanding.
Twitter
BotonSocial por: SocialEmpresa
Category: TV Reviews & Recaps