Tonight Syfy premieres its third installment of its successful campy shark films, Sharknado 3: Oh Hell No! Sharknado is known for its outrageousness, from chainsaw vs. shark fights to gruesome deaths, and this new film does not disappoint.

This time, the tornados of sharks hit the "feast coast" as Fin (Ian Ziering) is in D.C. accepting his presidential award for bravery, when the White House is hit with the flying sharks. Fighting the beasts as only he can, he must make his way to April (Tara Reed) who is in danger in Orlando, with the help of Nova (Cassie Scerbo) and her new partner Lucas (Frankie Muniz) who've been preparing for just such a storm. 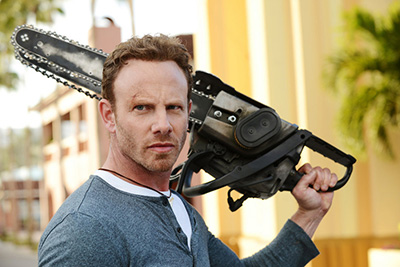 The film is not only filled with fun mayhem and new shark (and human) kills but also more cameos - a lot more, so many to actually become a bit distracting at times. From David Hasselhoff as Fin's father and Bo Derek as April's mother, to Jerry Springer, to Lou Ferrigno, and everyone in between. 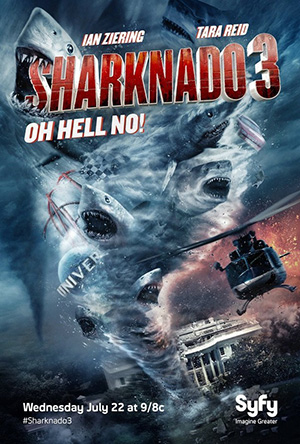 As with the previous Sharknado films, don't expect a normal horror film or a deep script; the movie is meant to be over the top and silly, yet still gruesome, often gratuitously so. But that, in my opinion, is what makes the films fun: the tongue-in-cheek dialog and the overall craziness of sharks flying in every direction, and the third installment culminates in even more cheesy and gory craziness than ever.

Be sure to tune-in to Syfy tonight for some laugh-out-loud entertainment and brutal carnage in Sharknado 3: Oh Hell No!, and for even more fun, follow along with social media live during the premiere.