The wait is finally over. Tonight SyFy will premiere their new series, Being Human, a "reimagining" of the BBC series of the same name. Some fans of the original series aren't sure if they should tune in tonight, but they should. The new series stands on its own, even with the same overall story - a vampire, a werewolf, and a ghost live together as roommates. After that, is anyone's guess. According to those involved in the series, plots may change and even if situations are the same, characters may react in different ways. The second season may not resemble that of the original series at all. Regardless, the series so far is brilliant. After watching the pilot tonight you will be thirsting for more.

Meet Aidan (Sam Witwer; Battlestar Galactica; Smallville), a tortured vampire who wants to control his addiction. He doesn't always succeed, and his "mentor" Bishop isn't helping things, always trying to pull him back into his seedy underworld. Aidan, however, would rather walk his own path, even if it is not easy.

Josh (Sam Huntington; Supernan Returns; Fanboys) is not a typical werewolf. He's shy and also nervous around the ladies. Not the alpha male that Hollywood has made us use to. Though that doesn't mean we don't get to enjoy him running through the woods naked.

Sally (Meaghan Rath; Prom Wars, 18 to Life) is the free-spirit. Even though she's been living a lonely existence for six months, considering no one but Aidan and Josh can see or talk to her, she often is the most cheerful of the bunch, even as she struggles with not being able to leave the house.

The three live together, trying to have some normalcy, and at the same time retain their humanity. 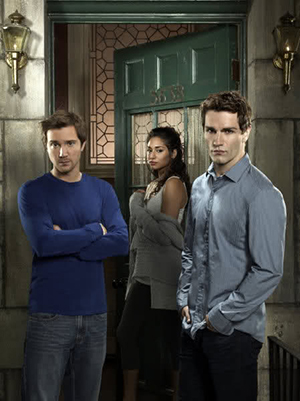 The first half of the pilot does a good job of introducing the characters and their situations, but the story does move, and you still get a feel not only for who these "monsters" are, but how they are forced to live and how they want to change. The script is well written and executed.

We are also introduced to Bishop, played by Mark Pellegrino (Lost, Supernatural), who is sort of a leader of a vampire clan. He's not happy that Aidan would rather use a blood bank than kill humans. He wants the old Aidan that would be happy to go slaughtering with him. Aidan may want to break clean but he still needs Bishop's help to clean up his mess.

Both Aidan and Josh are nurses at the hospital, which is where in the pilot, Josh runs into someone from his past that wants to tie up lose ends. He just doesn't want to eat her.

Sally, at Josh's insistence wants to try to move beyond the house, but she needs his help to see her fiancé, which he is unwilling to give. How can she move on without any closure?

I really feel these characters are relatable. You could take away the supernatural elements and it would still be believable. The show is really about the characters and their relationships and how they deal with not being human. They do the best they can, hoping it will be enough.

Being Human premieres tonight with part one of the pilot at 9/8 central on Syfy. Don't forget to check back after the episode to read a detailed recap, and also to join us on Fandom Access on Wednesday as we discuss tonight's episode.