SciFi Vision | All Reviews | Television Reviews | "Being Human" Holds its Own

"Being Human" Holds its Own

Syfy has carried reimagined series before, take Battlestar Galactica for example. However, Syfy's newest series, Being Human, is different in that the original series is currently still on television in its third season on the BBC. Many people have been hesitant on whether or not to tune in to Syfy's version, especially fans of the original. After watching the first three episodes and talking to some of those involved in the show, however, I think everyone should give it a shot. Syfy's version can definitely hold its own.

It's true that the general story line is the same - a vampire, a werewolf, and a ghost become roommates, and because of the success of franchises like Twilight and True Blood, that may be enough to pull a certain demographic in. Some of the rules and myths of supernatural creatures are of course the same, but it is almost unavoidable that there would be an overlap with all of the other shows out there. However, this show is nothing like the other current popular shows with similar themes.

All three characters long for normality and consider themselved cursed. As you would expect, Aidan, the vampire (Sam Witwer; Battlestar Galactica, Smallville), tries (and at times fails) not to kill humans, as does Josh (Superman Returns, Fanboys), the werewolf played by Sam Huntington, who turns once a month. Meanwhile Sally, the ghost (Meaghan Rath; Prom Wars, 18 to Life) who haunts the friends' new apartment, learns what it means to be ethereal and struggles to live without being able to interact with others, or even to leave the apartment.

Having only seen a couple episodes of the original, I cannot say how similar certain storylines are, but from what I have seen, regardless, they are very enjoyable, even if some were familiar. The producers and actors of the show have stated in various interviews that even if certain situations are the same, they may be handled completely different on the new series. And it's great that Syfy also gets thirteen episodes compared to BBC's six to develop the story during the first season.

I found the stories compelling and the characters believable in their struggles. The scripts were well written and I was really surprised when each episode was over because it moved so quickly and was quite eager to start the next. 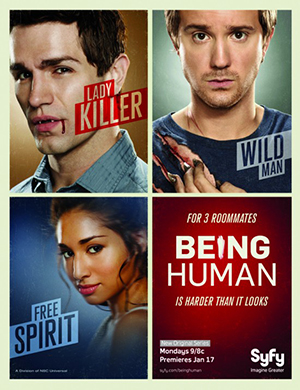 The overall look of the show, which is filmed in Montreal, adds to the atmosphere. I can't comment on the effects yet, as they were incomplete at the time of my viewing.

As for the characters, Aidan's continual struggles with trying to be human and realizing he's not, though not unexpected (we've all seen the "vampire tries not to kill his lover or friends for their blood" story before), are more about how the character deals with it. And it is interesting to see him struggle with the fact that he has been a "monster" in the past. Witwer was well cast; he plays the haunted vampire well. Of course his chiseled good looks don't hurt either.

Also a different spin from what we are used to, is to see a werewolf that is almost the opposite of aggressive. Josh isn't a lady's man alpha male; he's rather shy. It's kind of endearing. Yet he gains appropriate footing when he needs to be assertive to protect those he loves.

Sally is understandably frustrated with her new life. It would be hard enough not being able to interact with your loved ones, but she has to still see her fiance hurting. Yet somehow Sally still often is the liveliest one of the group. It's also fun to see her learn about her abilities.

The other notable performance lies with Lost's Mark Pellegrino in his role as Bishop. He is Aidan's mentor (though not necesarilly a good influence) and helps him clean up his messes, though not always the way Aidan would like. To the humans he is a police officer which enables him to run damage control.

The story really focuses on the groups' attempts to stay connected to their human sides, and for two of them to learn to control the monsters they fear they are, and for the other, to stay grounded, even when her existence has been turned upsidedown.

In the end I really have loved the series so far. The only disappointment I face is that I will have to wait until February to see episodes that are new to me. I know it will be well worth the wait.