looks can kill in a dangerously sexy television series From the creators of “NCIS”, “Castle” and “Necessary Roughness” 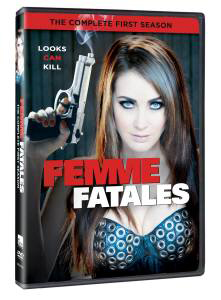 Looks can kill in season one of FEMMES FATALES, a Cinemax “After Dark” anthology series about powerful, sexy and dangerous women inspired by and styled in the tradition of pulp stories, film noir and graphic novels. This January, SEASON ONE finally arrives on DVD along with over two hours of never-before-seen bonus materials including audio commentaries, deleted & alternate scenes, the “Making of FEMMES FATALES” and much more!

The half-hour program from creators Mark Altman (“Castle”, “Necessary Roughness”) and Steve Kriozere (“NCIS”, “Castle”) features stories inspired by such noir classics as Double Indemnity and Pulp Fiction and classic thriller TV series like The Twilight Zone. In each of stand-alone episodes, women find extraordinary ways of coping with their problems, channeling their survival instincts and bringing out their inner guile. Every episode is introduced by a mysterious and enigmatic host Lilith, played by Tanit Phoenix (Death Race 2, Lost Boys 3), and features different casts and storylines, some of which are intertwined as part of the series overall mythology.