NO ONE IS SAFE WHEN COMEDY’S UNSTOPPABLE ICON JOAN RIVERS DELIVERS HER TRADEMARK BITING WIT IN HER FIRST-EVER LIVE STAND-UP DVD!

This January, one of the hardest working women in the world takes her infectious energy to the stage for her first live stand-up DVD, courtesy of Entertainment One. 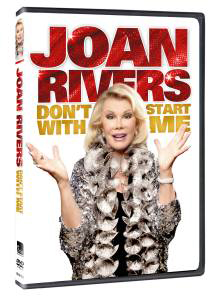 Grow up, check your sensitivity at the door and feel the comedic wrath of entertainment icon Joan Rivers, Emmy Award-winning comedian, actress and national media superstar. In JOAN RIVERS: DON’T START WITH ME, everything and everybody is fair game, from Asian women, Gays, Mexicans, animals, pop stars, and her own domain of reality television, as Joan goes to great lengths to insult everyone, leaving the audience in stitches.  Joan commands the stage from start to finish in this hilarious comic feat, which premiered on Showtime in November 2012