FOR THREE ROOMMATES, BEING HUMAN IS HARDER THAN IT LOOKS…

VAMPIRES, WEREWOLVES AND THE SUPERNATURAL COLLIDE IN THE SECOND SEASON OF THIS SMASH SYFY SERIES THAT MIXES “TRUE BLOOD” WITH THE “VAMPIRE DIARIES” 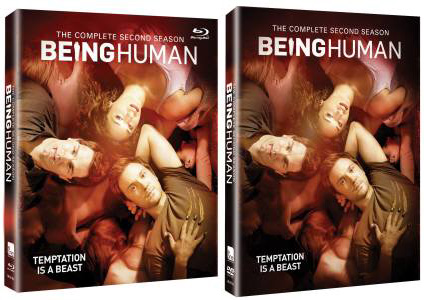 From the creative team behind “Pillars of the Earth,” “The Mentalist” and “Heroes”, BEING HUMAN is Syfy’s re-imagining of the acclaimed UK series created by Toby Whithouse (now in its fifth season overseas).  Starring Sam Witwer (“Smallville”, “Battlestar Galactica”), Meaghan Rath (“The Assistants”) and Sam Huntington (Superman Returns), BEING HUMAN: THE COMPLETE SECOND SEASON follows three paranormal, 20-something roommates living in a Boston brownstone – vampire “Aidan” (Witwer), werewolf “Josh” (Huntington) and ghost “Sally” (Rath) – as they struggle to resist the temptations of their true natures.  Watching the characters hide their dark secrets from the world, while helping each other navigate the complexities of living double lives and trying to be human has made the series a supernatural smash.  The 4-disc sets both contain extras including a SEASON 2 “Making Of” featurette, a behind-the-scenes Vlog and the footage of the stars at San Diego Comic Con 2012.