Published: Tuesday, 15 March 2011 22:25 | Written by SciFi Vision
Marcel's Quantum Kitchen doesn't premiere until March 22, but you can get ready for the new series with a promotional t-shirt that we are giving away, coutesy of Syfy.

All you have to do is follow scifivision on twitter, and tweet to @scifivision what you are most looking forward to on the new series, or what creative dish you would love to see Marcel create on the show. The contest runs through 11:59 pm on March 22.

In the mean time, check out all the great stuff about this original series that has been posted on Sci Fi Vision, including an upcoming interview with Marcel as well as the bios / press release and  photos below. 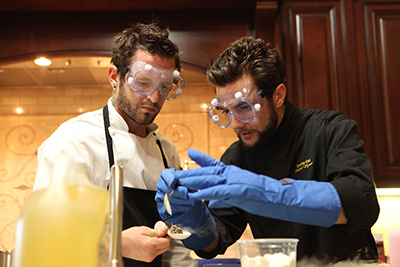 Marcel Vigneron
Marcel Vigneron has dedicated his life to gastronomy and honing his skills as a chef. Promoted to prep cook when he was just sixteen, he was the youngest person in the kitchen, and he's been changing the game ever since.

He talks to his food for inspiration and believes that cooking is one of the most beautiful careers that can be chosen, which is why he is so passionately driven to pursue his craft. Marcel attended the acclaimed Culinary Institute of America (CIA) in New York and achieved his Associate's degree in Culinary Arts, as well as a Bachelors Degree in Hospitality Management. At CIA, Marcel enrolled in the teaching assistant program where he served as the Sous Chef to Dwayne Lipuma at the school's award-winning Ristorante Caterina de' Medici. Since then, he has continued to pursue the progression of gastronomy and at the young age of 25 gained national notoriety in season two of Bravo's Emmy-winning reality series, Top Chef where he made it to the finals, finishing as the runner-up. 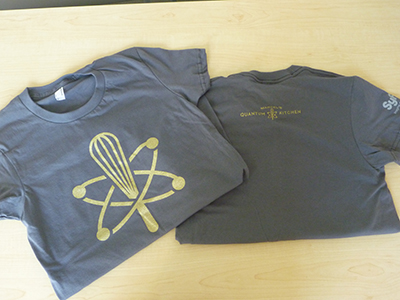 He has worked all over the globe with world-renowned chefs, including Joël Robuchon (named Chef of the Century by the Gault Millau) and Michael Mina (awarded Best Chef of 2002 by the James Beard Foundation during the time of Marcel's employment). Marcel has also spent time in Barcelona, Spain, where he took classes at El Taller with famed Chef Ferran Adrià of El Bulli restaurant, which was named the top restaurant in the world in 2007 by Restaurant Magazine. Marcel most recently worked under José Andrés as the Executive Sous Chef of The Bazaar at the SLS Hotel in Beverly Hills and he is currently an Executive Chef in Los Angeles.

It's true that Marcel spends time conducting experiments and researching kitchen chemistry, but he truly feels that in order to become a great chef one must know much more about food than just science.

Jarrid Masse
Jarrid Masse is a jack-of-all-trades — he's a cook, a rocker front man, a welder, a puppeteer, a painter...and even a circus performer. Self-described as an "artiste," he will use his wide array of talents and wild imagination to help Marcel come up with unforgettable unique menus and décor.

Born in Rhode Island and raised in Lakeland, Florida, Jarrid discovered he was a natural performer as a teenager attending Harrison Arts high school in Lakeland. While performing at the Viper Room a few years ago, Jarrid was introduced to Marcel by another renowned chef, Michael Voltaggio. He was soon hired to work with both of them as a line cook at the acclaimed restaurant, the Bazaar by Jose Andres. Marcel and Jarrid quickly bonded over their mutual passionate enthusiasm for artistic expression, so when Marcel decided to go out on his own, he knew he had to have Jarrid on his team.

Jarrid's business card reads: "passion is often mistaken for madness." Jarrid says this adage has never been truer for a person, "I am the self-absorbed artist to outsiders and the passionate storyteller to my closest friends."

When not in the kitchen, Jarrid enjoys creating art or going out with friends.

Devon Espinosa
With 12 years in the kitchen under his belt, Devon Espinosa is one of the most experienced members of Marcel's team. In addition to his culinary acumen, this L.A. native is a talented mixologist and will create unique cocktails for each of Marcel's events.

Devon and Marcel became the best of friends as soon as they met in 2001 on their first day of school at New York's Culinary Institute of America. After graduation, Devon gained additional training while working at Spago and the Four Seasons of Beverly Hills.

While serving tables to make money during college, Devon found his true passion when he took over for a bartender who walked out during a busy shift. With no experience and still under the age of 21, he started his career with only a rudimentary bar book to guide him. It didn't take long for Devon to take his bartending skills to another level as he began finding ways to incorporate unusual ingredients to invent amazing, delicious mixed drinks.

When Devon isn't working with Marcel, he serves as the mixologist at The Tasting Kitchen in Venice. In 2010, Eater L.A. nominated Devon as the city's Best Bartender.

Robyn Wilson
Robyn Wilson is the newest member on Marcel's team. in addition to helping prep dishes, she also heads up service in the front of the house. unlike Devon and Jarrid, she has no prior work history with Marcel Vigneron and is anxious to prove herself.

Robyn chose a career in cooking about 10 years ago after realizing she had a passion for entertaining and throwing dinner parties. Self-taught by reading cookbooks and watching cooking shows, she most recently ran the catering on rock tours for musicians like Katy Perry, Korn, Little Big Town and 303. Though Robyn enjoyed being on the road, she's excited to be working with Marcel because it's a great opportunity for her to fill her culinary toolbox and work hands-on with a master of molecular gastronomy and avant-garde cuisine.