The Calling tells the story of NYPD Detective Avraham Avraham, whose belief in mankind is his superpower when it comes to uncovering the truth. Guided by a deep sense of spirituality and religious principles, Avraham is left to question his own humanity when a seemingly routine investigation turns upside down.

The series from prolific showrunner, writer and executive producer David E. Kelley (Big Little Lies, The Undoing), Academy Award Winning director Barry Levinson (Rain Man), and co-composed by Hans Zimmer and Steve Mazzaro will have you hooked on the suspenseful and unpredictable storyline as it’s unlike other investigative dramas out there - following a detective with a provocatively human approach to crime. The series premieres on November 10 exclusively on Peacock with all 8 episodes dropping at once.

Read on for keyart and an official trailer as well as more information about the series, after the jump. 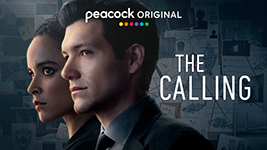 A NOTE FROM DAVID E. KELLEY (SHOWRUNNER / EXECUTIVE PRODUCER / WRITER)
Dror Mishani wrote a riveting and emotionally complicated series of books, the center of which is Avraham. Avi is a deeply mysterious, spiritual and compelling detective unlike any protagonist I’ve encountered before. Jeff Wilbusch brings him to rich and hypnotic life in front of the camera, and behind the camera Barry Levinson is... Barry Levinson. What a privilege to have him at the helm. Add Hans Zimmer to the mix, and the final product is something we hope thrills, moves, and instills a bit of hope in the audience.

A NOTE FROM HANS ZIMMER AND STEVE MAZZARO (CO-COMPOSERS)
Our goal with The Calling was to write a score that constantly keeps every character a suspect throughout.  We used a variety of raw and gritty-sounding stringed instruments coupled with pulsing synths, contrasted by a beautifully haunting duduk performance from our good friend, Pedro Eustache for Avi’s character.  We’ve also manipulated real-world sounds such as jail cells and door sounds hidden within our percussion.