“Peacock is committed to expanding the breadth and depth of our content and pushing the boundaries of compelling storytelling across genres,” said Susan Rovner, Chairman, Entertainment Content, NBCUniversal Television and Streaming. “I am excited to unveil a dynamic slate of new programming that truly offers something for everyone, whether you’re a fan of comedy, reality, true crime or sports.”

EX RATED explores the growing trend of adult singles who send standardized “exit surveys” to all of their previous romantic partners – from long-term relationships to casual hook-ups – to learn why their relationships never materialized or simply didn’t last.

EX RATED is a revealing social experiment that looks at sex and relationships in a whole new light – it will be hilarious, shocking, awkward and even informative.

The series will challenge adult singles of all ages and backgrounds to face raw, unfiltered feedback on everything from their personality to sexual prowess and relationship skills in order to find out where they went wrong and how they can improve.

UNTITLED CRAIG ROBINSON PROJECT is a comedy about class, capitalism and one man’s quest to achieve the American dream. And also about hunting really big snakes. 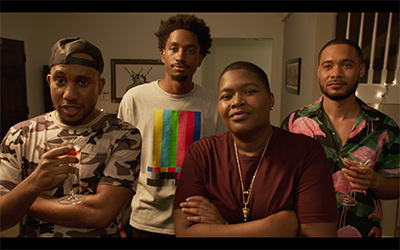 In BUST DOWN, four casino employees in a dead-end job in middle America attempt to find self-worth in their bad ideas.

Six episodes have been ordered.

BUST DOWN is produced by Universal Television, a division of Universal Studio Group, in association with Broadway Video. Andrew Singer and Hilary Marx also serve as executive producers. Richie Keen will direct.


‘JOHN WAYNE GACY: DEVIL IN DISGUISE’
Peacock has ordered six-part documentary series JOHN WAYNE GACY: DEVIL IN DISGUISE, marking Peacock’s venture into unscripted and true crime programming. The docuseries tells the chilling story of one of the world’s most notorious serial killers told through the words of Gacy himself, those who were forever changed by his unspeakable deeds and those who believe that the full truth about the case remains concealed to this day.

Peacock Original JOHN WAYNE GACY: DEVIL IN DISGUISE premieres on Thursday, March 25. All six episodes will drop at once.

From NBC News Studios and Rod Blackhurst (Witchcraft Motion Picture Company), the Emmy-nominated producer of “Amanda Knox,” JOHN WAYNE GACY: DEVIL IN DISGUISE is a comprehensive deep dive into the riveting case. The series follows the investigation of serial killer John Wayne Gacy and poses new questions about what may have happened and who else may have been involved.

The docuseries will highlight a multi-hour interview with Gacy himself from prison, only minutes of which have ever been seen, as well as exclusive audio and video interviews, including with one of his closest confidantes and his second ex-wife.


‘MICHAEL PHELPS: MEDALS, MEMORIES & MORE’
All-time swimming great Michael Phelps is the most successful and most decorated Olympian of all time with a total of 28 medals, 23 of them gold.

The countdown to Tokyo begins with MICHAEL PHELPS: MEDALS, MEMORIES & MORE, a three-part series from NBC Sports, in which Phelps takes a look back at his storied Olympic career and watches each race with Rowdy Gaines and Dan Hicks, NBC Sports swimming commentators who covered the past six Summer Games. The series will exclusively premiere on Peacock prior to the Tokyo Olympics.

Each episode of the series will feature a different era of his career. In the first episode, “Greatness Begins,” Phelps takes viewers back to his first Olympic appearance as a teen in the Sydney Olympic Games Episode two, “Eight Golden Races,” focuses on the details that made Phelps extraordinary as he takes on legendary status. In the third and final episode, “London to Lasting Legacy,” Phelps reveals an intimate look at how vulnerable he was throughout major portions of his career.


AMBER RUFFIN – TIME100 NEXT LIST
TIME has named Amber Ruffin – host of Peacock’s THE AMBER RUFFIN SHOW – to the 2021 TIME100 Next list. An expansion of the TIME100 list of the most influential people in the world, TIME100 Next highlights 100 emerging leaders who are shaping the future of business, entertainment, sports, politics, health, science and activism, and more. The full list is available now at time.com/next.

Amber Ruffin is a writer, executive producer, and host of the WGA Award nominated series THE AMBER RUFFIN SHOW on Peacock. She is also an Emmy and WGA Award nominated writer and performer for NBC’s “Late Night with Seth Meyers.” Ruffin was the first African American female to write for a late-night network talk show in the U.S. She wrote and performed on Comedy Central’s “Detroiters” and was a regular narrator on the cabler’s “Drunk History.” Ruffin was previously a performer at Boom Chicago in Amsterdam, the iO Theater and the Second City in Chicago. In addition, she was a writer/performer for the 2018 and 2019 Golden Globe Awards and has written for the series “A Black Lady Sketch Show.” Ruffin is a recent New York Times bestselling author, along with her sister Lacey Lamar, of “You’ll Never Believe What Happened to Lacey: Crazy Stories of Racism,” published by Grand Central Publishing in January 2021.
Twitter
BotonSocial por: SocialEmpresa
Category: TV News