Please find details in the release below.

Showrunner Greg Nicotero Will Direct the Story for Series Premiere 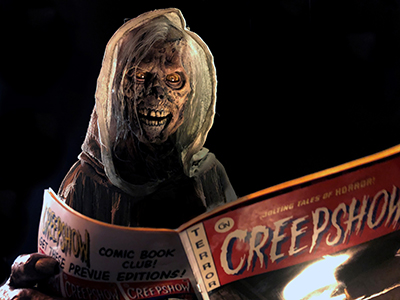 “I feel I’m in great company getting the opportunity to direct a story written by Steve,” said Nicotero. “Between ​Salem’s Lot, ​Pet Sematary and ​The Stand, I’ve always found his stories rich in relatable characters forced into supernatural situations beyond their control—the everyday person’s primal fears. To visualize ‘Gray Matter’ for Creepshow with the help of Adrienne, Giancarlo and Tobin was about as good as it gets for a horror fan from Pittsburgh!”

In “Gray Matter,” Doc and Chief, two old-timers in a small, dying town, brave a storm to check on Richie, an alcoholic single father, after encountering his terrified son at the local convenience store. The story, first published in 1973, is part of King’s best-selling 1978 collection, ​Night Shift.

For Barbeau, “Gray Matter” represents a return to the​Creepshow franchise more than 25 years after her unforgettable portrayal of “Billie” in the 1982 segment, “The Crate.” Barbeau also serves as the host of the Shudder Original podcast, ​She Kills.

“I was thrilled when Greg asked me to join the​Creepshow world once again,” said Barbeau. “And then working with Tobin and Giancarlo, with Greg as our director, well, that was the icing on the cake — no, not ​that cake. Oh, you know what I mean.”

The DNA of the original movie is firmly embedded in the new series: in addition to Barbeau and King’s return to the franchise, fans will recall that writer Joe Hill (who has also contributed a story this season) played comic-book-loving “Billy” in the film’s wrap-around segments. John Harrison, who was 1st Assistant Director on 1982’s ​Creepshow and composed its iconic theme, is back to direct several segments of the series. And executive producer Greg Nicotero visited the first film’s set as a teenager, and contributed make-up effects to its 1987 follow-up, ​Creepshow 2.

With “Gray Matter,” Shudder has confirmed eight of the twelve segments that will make up​Creepshow’ssix-episode season. Previously announced segments include “By the Silver Water of Lake Champlain” by Joe Hill, “House of the Head” by Josh Malerman (​Bird Box), “The Companion” by Joe Lansdale, Kasey Lansdale, & Keith Lansdale, “The Man in the Suitcase” by Christopher Buehlman, “All Hallows Eve” by Bruce Jones, “Night of the Paw” by John Esposito, and “Bad Wolf Down” by Rob Schrab. Additional titles and casting will be announced soon. The series is scheduled to wrap production later this week in Atlanta, GA.

ABOUT SHUDDER
AMC Networks’ SHUDDER is a premium streaming video service, super-serving fans of all degrees with the best selection in genre entertainment, covering horror, thrillers and the supernatural. SHUDDER’s expanding library of film, TV series, and originals is available in the US, Canada, UK, Ireland, and Germany on most streaming devices for 4.99/month or 49.99/year. To experience SHUDDER commitment-free for 7 days, visit ​​www.shudder.com​​.

ABOUT THE CARTEL
Founded in 2011 and run by partners Stan Spry, Jeff Holland, Evan Corday, Geoff Silverman, and Eric Woods, the Cartel is a feature film and television production, management, and financing company representing top-tier showrunners, show creators, writers, directors, producers and production companies in film, TV and new media. The Cartel has also been involved in more than 50 movie and television productions since inception, including the upcoming animated series “Twelve Forever” for Netflix, the upcoming unscripted series “Hunting Abroad” for A&E’s FYI, and previously production for the series “Ties That Bind” for Up TV, and “A Place in the Sun” for Discovery as well as several recent feature films, including “Switched for Christmas,” “Jeepers Creepers 3,” “Christmas Connection,” “Love at the Shore,” “Sun Sand and Romance,” “Love at First Glance,” and “Wrong Nanny,” to name a few. The Cartel recently signed a co-production deal with Reel One Entertainment to produce and co-finance 40 films over the next three years. In 2013, the Cartel purchased and renovated Tamarind Lithography Studios, which is their Los Angeles headquarters, as well as a full-service production and post-production complex. The Cartel also has offices in London, England and New York, NY. ​www.CartelHQ.com