Published: Tuesday, 07 June 2022 15:08 | Written by Jamie Ruby
Warner Bros. Home Entertainment provided me with a free copy of the Blu-ray I reviewed in this Blog Post. The opinions I share are my own.

Based on the blockbuster hit from 1996, Eraser: Reborn arrives on Digital, Blu-ray, and DVD today. The action film stars Dominic Sherwood as U.S. Marshal Mason Pollard who specializes in “erasing people” – faking the deaths of those entering witness protection and erasing their digital fingerprint. When crime boss’ wife Rina Kimara (Jacky Lai) refuses to go into witness protection, Pollard proves to her she is in danger, and she reluctantly agrees to flee to Cape Town, South Africa. Things do not go as planned, however, when Pollard realizes he has been double-crossed, and they are chased by assassins who will stop at nothing to erase them permanently.

Eraser: Reborn is a mixed bag, although, overall, I had a positive experience watching it. The action keeps the movie flowing with a few comedic moments interspersed. However, it is an action film, don’t expect a futuristic science fiction movie. I admit, I don’t remember much about the original, so it might have been similar, but other than the very brief mention of a bit of tech that was barely utilized, it just felt like a run of the mill action movie about marshals protecting an asset. That’s not to say that it wasn’t enjoyable, because it was; it just wasn’t quite what I expected. 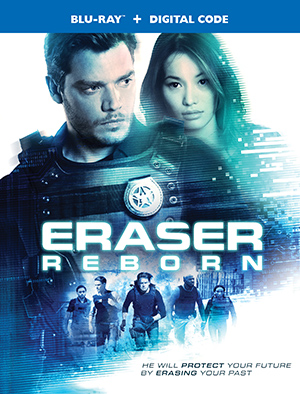 That being said, the cast was well chosen, and Sherwood is believable in the role. He and Lai play well off of each other and their friendship is believable. Eddie Ramos is also a standout as Sugar Jax, who brings moments of levity to the film.

The script is decent, although there are some hiccups here and there (and the catch phrase was way overused), and the story is fairly predictable. The ending also leaves a lot to be desired. Although Sherwood and Lai had chemistry, to me, the film wasn’t really set up as a romance between their characters, and the last few moments didn’t feel earned at all.

The action sequences were mixed. Some of the special effects, particularly the explosions, were quite obviously CGI, however, the film didn’t have a huge budget, so it’s understandable. Most of the fight scenes were done well, although some seemed a bit over choreographed.

Overall, I found Eraser: Reborn to be entertaining and fast-paced, and it’s definitely worth a watch. However, with only one short and fairly average bonus feature (see below), it’s not necessarily worth purchasing the disc.

The Warrior and the Witness: Making ERASER: Reborn [9:08] – This feature gives a behind the scenes look with the cast and crew, featuring director John Pogue, writer Michael Weiss, producer Hunt Lowry, and cast members Sherwood, Lai, McKinley Belcher III, and Eddie Ramos. Interspersed with behind the scenes clips, the main topics discussed by the cast and crew are working with real marshals to make it realistic, working with the director, the location of Cape Town, difficulties in having a limited budge, stunts and choreography, and weapons.