SciFi Vision | Reviews | DVD Reviews | Blu-ray Review: Men in Black: International is Another Out of This World Installment

Blu-ray Review: Men in Black: International is Another Out of This World Installment

Men in Black: International is the fourth film in the Men in Black franchise, which focuses on the secret government agency who protects the Earth from the scum of the universe. The story follows Molly, (Tessa Thompson), who after seeing something she can’t explain as a child, works to prove aliens do exist. Eventually she gets her dream job for the MIB as Agent M.

As M is getting used to a life where there are aliens around every corner, she ends up partnered with the cocky Agent H (Chris Hemsworth), who is a hero at the agency for previously saving the universe along with his boss, Agent High T (Liam Neeson).

When the two are sent on a routine mission to protect an asset, things quickly go from bad to worse. The two must work together as they meet a myriad of unique and amusing characters along the way, including their new friend Pawny (Kumail Nanjiani), to stop the biggest global threat yet, a mole inside the organization. 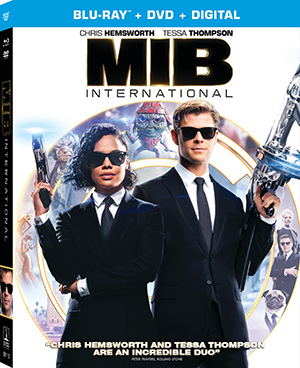 Obviously one of the big ways Men in Black: International differs from the original films in the franchise is the fact that it takes place around the world rather than in the United States. I appreciated this aspect, because it helps enhance the feeling of danger as the agents travel all over to try to save the universe. It also of course makes for some beautiful new locations as well as new and interesting creatures.

Another difference, of course, is the cast. Although nothing will replace the original actors from the other films (Will Smith and Tommy Lee Jones), Hemsworth and Thompson are brilliant in the movie. They have fantastic chemistry together and play so well off of each other. They are able to deliver both entertaining and humorous performances.

The supporting cast works wonderfully as well. Pawny maybe be a computer-generated character, but Nanjiani brings a vitality to the character that really makes him shine as their tiny companion. He often has the best comedic lines of the film as well.

The other alien creatures only enhance the world and are just such a joy to look at. Production has done such an awesome job of creating new characters for the film that still fit perfectly in the MIB world, yet bring something new. I liked getting to see them through M’s eyes and her reactions to her new crazy life.

The story itself is lively and different. I like that all the films’ storylines still connect together in different ways.

The movie also has a lot of excellent sci-fi action sequences, from the fights, to chases, and everything in between.

As with the other editions in the franchise, Men in Black: International is a wild and gratifying ride. It’s filled with edge of your seat action and many laughs. It’s definitely one that should take its place in your movie library with its predecessors.
Special Features


Gag Reel [2:13] - This is almost entirely messed up lines and other flubs.


Alien Shopping Network! [2:20] These can be played separately or at once.

* alien-cestry.com [1:21] - This feature is narrated by Frank the Pug and is a fake
advertisement parodying a company like ancestry.com, except it’s for finding
out your alien heritage.

* The Neuralyzer: Like it Never Happened [1:05] - Another funny
ad/infomercial, this one for www.flashandforget.com, and it sells neuralyzers
for you to wipe bad or embarrassing memories.


Deleted Scenes [11:35] - All of these scenes are before many of the visual effects were added, so they often look unfinished. They can be played separate or at once.

* Do Not Turn Around! [1:52] - Agent H leaves himself a message before sneaking
out of the alien woman’s bedroom. I would have liked to have seen this scene
in the original cut.

* Extended Nightclub [3:08] - Nightclub scene with the twins and Vungus
(Kayvan Novak). It’s interesting to watch the scene without the added visual
effects, as well as see Novak acting before motion capture is added.

* How Did They Recruit You? [3:02] - Agent M talking to Agent H about his
recruitment to MIB. This scene would have been a nice addition to the film, in
my opinion, and I wish they had left it in.

* Ready for Riza’s [1:11] - Agent H getting some casual clothes before he meets
with Riza (Rebecca Ferguson).

* Pawny Holds Court [0:31] - Although distracting, because it is without
animation, it’s a cute little scene.

* History Repeats Itself [0:35] - M notices H is repeating himself when talking
about how he saved everyone from the Hive. Perhaps it gave away a clue too
soon.


New Recruits, Classic Suits [7:05] - This behind the scenes feature talks about fitting everything into the world of Men in Black. Director F. Gary Gray and producers Laurie MacDonald and Walter Parkes talk about working with the actors, who also talk about working with each other. H and M’s chemistry is discussed, and a bit of Nanjiani is shown filming before motion capture was added.


Let’s Do This! Inside The Action and Stunts [5:43] - Wade Eastwood, the second unit director and stunt coordinator, talks about the action in the film and marrying it with the humor, while also staying true to the other films. The actors also talk about filming fights, action sequences, and stunts. Highlighted are M’s fight with Riza, H’s fight with Luca (Spencer Wilding), the hoverbike sequence, and the car chases.


Look Right Here: Gadgets, Weapons, and Rides [4:20] - The producers talk about juggling what fans consider essential to the show, such as the props, and being able to change and reinvent them. Highlighted are the neurolizers, Agent H’s Jaguar, the hoverbike, weapons, and more. Gray and Eastwood are also heard from, as well as the production designer, Charles Wood, and prop master Ben Wilkinson.


Expanding the Universe of MIB [5:57] - Different filming locations are discussed by the cast and crew. Highlights include New York, London, Paris, Marrakesh, and Naples. The production designer talks about rebuilding some of the interiors from the first film and using VFX to extend some of the sets. Elements of the design and style of the film are discussed, as well as creature design and using motion capture.


Frank & Pawny’s Peanut Gallery [5:37] - Frank the Pug and Pawny take a look back at the previous films. The two tease each other as they talk. It’s done in a kind of Mystery Science Theater 3000 style.


Les Twins Leave it on the Floor [2:22] - Les Twins, Laurent and Larry Bourgeois, and their dancing are discussed. The cast and crew talk about working with them.


In Case You’ve Been Neuralyzed MIB Recap [3:21] - Frank the Pug recaps the other Men in Black films.


The MIB Meet the NBA [2:36] - This is a fun feature. Agents H and M discuss the idea that NBA stars are likely aliens. They talk to different players who show their alien sides.

These are also front-loaded with the disc.

I was provided with the Blu-ray combo version of the film to review. According to the press release, the deleted scenes and Alien Shopping Network ads do not come with the DVD version.

The movie comes in the normal blue clamshell case with cardboard slipcover. There are two discs: one Blu-ray and one DVD. Included is also an insert booklet with the Movies Anywhere digital code for the film, as well as an ad for Sony Rewards saying that you can receive a free movie for every five that you register. Also, inside is an ad for the MIB Global Invasion game with a rewards code.

The one thing I want to mention before concluding the review, is that when I turned on captions, I had to reset them for each and every feature. I’m not sure if that’s a flaw with the disc or something with my player, but I’ve never noticed that happening before, and it was extremely annoying.

Men in Black: International is a terrific new chapter in the MIB universe. Although the cast is different, they are extremely enjoyable, and it’s an exceptional film, which I highly recommend.

If you are a lover of bonuses, this set comes with a ton of both fun and informative features that are well worth buying the film for.

If you like the franchise, you’ll love adding this newest installment to your movie collection.