Blu-ray Review: Glass - An Excellent Conclusion to the Trilogy - Out Now

Today the comic book thriller Glass, written and directed by M. Night Shyamalan, comes to 4k Ultra HD, Blu-ray, DVD, and Digital. Glass is the third film in a trilogy that started almost twenty years ago with the release of Unbreakable, followed by the more recent Split years later. No one had any idea that the first two films were related until the credits were ready to roll on the second film, with a scene showing that both took place within the same universe, which sparked people’s excitement for more.

In the first film, a comic book art dealer, Elijah Price (Samuel L. Jackson), a.k.a. Mr. Glass, is born with “brittle bones” disease, which causes him to be easily injured and suffer multiple breaks throughout his childhood. He feels that if he exists, he must have an opposite. He makes it his mission to find such a person, and eventually tracks down David Dunn (Bruce Willis), a lone survivor of a train crash that Price himself caused. Dunn subsequently finds himself to be super strong and nearly invincible, except for his weakness of water. Dunn becomes a super hero of sorts, a crime-fighting vigilante, The Overseer, helping the weak, as he also has the unique ability to see flashes of the criminal pasts and futures of others with only a touch. The only one aware of his abilities is his son, Joseph (Spencer Treat Clark). At the end of the film, Price is committed to a psychiatric facility. 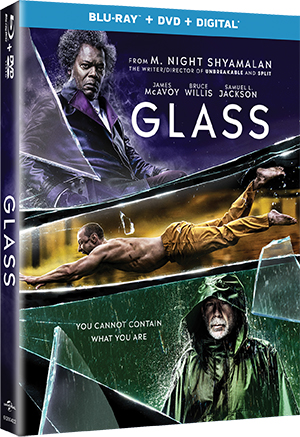 In the second film, James McAvoy stars as Kevin Wendell Crumb, a man with Dissociative Identity Disorder - with twenty-three identities - who kidnaps three girls as his twenty-fourth personality emerges. He kidnaps and sacrifices girls who he feels are impure because they have not suffered. He eventually lets the last of the girls, Casey Cooke (Anya Taylor-Joy), go after he connects to her, finding out she was abused as a child like him. The last personality, however, is still released, the Beast, who is cannibalistic, often behaving like an animal, and seems to have superhuman strength and the ability to scale walls.

At the end of the second film, Dunn is at a diner watching a news report about the killer on the loose, nicknamed “The Horde,” when someone compares him to Price, connecting the two universes.

In the third film, The Horde is still at large, and Dunn, along with his now grown son’s help, has been trying to find him and stop him. Things escalate when The Horde captures new girls to sacrifice to The Beast.

Things get even worse when the police arrive and both Crumb and Dunn are taken to the mental facility where Mr. Glass is being held. There, psychiatrist Dr. Ellie Staple (Sarah Paulson) has been waiting for them, trying to convince them that they have delusions of grandeur, and their abilities are just in their heads.

Staple’s specialty is treating those who believe they are super heroes, and she thinks she can cure the two of them, as well as Mr. Glass.

Are super heroes and villains real, or can it all be explained away by science and madness? And with the hero locked up, who will be there to keep everyone safe from the cannibal and the mastermind?

Although the movie is part of a trilogy, you could probably get away with only reading recaps of the first two films, though I do recommend watching both if you haven’t seen them, as some things may not make as much sense.

The film digs deeper into the pasts of the characters and their psyches as they start to doubt who they really are. I liked this idea, as it keeps you guessing what is real, and it makes both sides seem possible.

While taking a magnifying glass to the characters pasts, it also helps evoke some sympathy for the killers at times, as a lot of their development was caused by psychological trauma and suffering.

As per usual with M. Night Shyamalan films, the script is solid, and there are some weird twists that keep you guessing.

The film also boasts an all-star cast, and both Willis and Jackson are superb, but the standout to me is McAvoy, who is exceptional. As with Split, he does a phenomenal job of seamlessly slipping between quite distinct personalities at the drop of a hat and is quite believable. He also was able to keep the character sympathetic when needed. Cooke is also excellent and helps bring a truth to McAvoy’s character.

While I didn’t love the ending and was left a bit unsatisfied, I liked that it was unexpected, and I did appreciate learning how the characters were connected. Overall, I enjoyed the film.

Alternate Opening [2:57] - There is an optional introduction by Shyamalan where he talks about originally setting the whole film in the hospital. The scene shows the employees preparing the building and equipping the patients’ rooms with safeguards. The length of time is including the intro.


Deleted Scenes - Each scene has the option of an introduction by Shyamalan, and you can choose to play all or one at a time. For some of them, the introduction is more interesting than the scenes, as the meaning of some of them is not self-evident. The below lengths of times are including the introductions.

* David Alone at Bar [1:42] - A slice of life clip with Dunn going to a bar alone and
arriving home.

* Patricia Talks to Cheerleaders [3:42] - A longer version of a scene in the film.

* Mrs. Price in Waiting Room [1:24] - A few seconds added to the scene with
Mrs. Price meeting with Dr. Staple.

* Mrs. Price Tells Elijah About Surgery [2:10] - Elijah moves the muscles in his face
to show his mother he is faking it as she tells him about the upcoming surgery and
that he doesn’t have a lot of time to do something.

* David Submits to Dr. Staple [2:01] - Dunn contemplates letting Dr. Staple perform
the procedure on him, because it would mean he could get out and be with his
son.

* Patients worship The Beast [1:49] - Some of the mental patients see The Beast as
his other identities do.


The Collection of Main Characters - In these short featurettes, Shyamalan and the cast talk about the characters and about working with the actors. Behind-the-scenes clips are shown in between interview clips and scenes from the film. There is also an option to play all.


A Conversation with James McAvoy and M. Night Shyamalan [5:10] - Shyamalan and McAvoy talk about a variety of topics, such as how the film is a mixture of comic book and thriller genres and how what sets this film apart from other super hero movies is its tone and uniqueness. McAvoy also talks about adding new personalities to his character and getting to explore The Beast more in the third film.


Bringing the Team Back Together [2:55] - Shyamalan talks about he started making movies when he was young. He and the cast and crew talk about how they are like a family. Many of the crew have been working on his movies since the beginning.
David Dunn vs. The Beast [2:11] - Interspersed with behind-the-scene clips, Shyamalan and members of the cast and crew talk about fight scenes and how they create them with a small budget, often using practical effects rather than CGI.

McAvoy talks about filming the fight scene with Bruce Willis and how the physicality on the film was relentless, as they didn’t have much time to shoot action scenes because of the budget.

The stunt most focused on is Dunn and The Beast’s fight outside the hospital.


Glass Decoded [2:53] - Shyamalan talks a bit about references in the film from the other movies for fans to catch. He also talks about the scene where Elijah gets his original wheelchair back, which has been in his own house for eighteen years.

The rest of the featurette is Shyamalan explaining the cinematic language using colors, including using primary colors for the comic world only and using different colors for each of the three main characters and what they mean, as well as muting colors in the hospital when the characters start questioning if they actually have powers and such.


Breaking Glass: The Stunts [1:28] - This featurette is Shyamalan, McAvoy, and stunt coordinator Manny Siverio talking about the stunt in the brick factory where body doubles crash through the window. Interspersed with the interviews are behind the scenes clips.


Connecting the Glass Universe [2:54] - Shyamalan talks about each film having its own style and feeling. He wanted Glass to stand on its own and not be derivative of the others.

Shyamalan and the cast also talk about how it was not revealed until the very end of the second movie that the films were related.


M. Night Shyamalan: Behind the Lens [2:47] - The cast and crew talk about working with Shyamalan on the film and how he knows exactly what he wants from the scenes. Shyamalan talks about his process.


The Sound of Glass [1:51] - The composer, West Dylan Thordson, talks about creating the score of the film and how a lot of it was actually recorded inside the hospital. Shyamalan also weighs in.


Enhancing the Spectacle [2:54] - Shyamalan and the visual effects team talk about using CGI. Some examples discussed are The Beast’s vein enhancement, how they had to combine takes together to make certain shots, and designing the Osaka tower.

They also discuss creating one of the most challenging effects, which was the scene with the water tower. 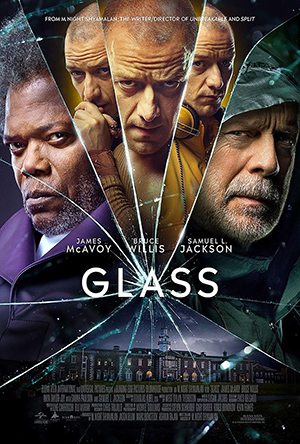 Raven Hill Memorial [2:17] - Shyamalan and members of the cast and crew talk about shooting at an actual defunct mental hospital in Allentown, PA. A lot of them found it creepy to film in.

Shyamalan talks about the long pink room working for a comic book feel.

They also found the location early on and were able to make revisions to the script to be able to write to the location.


Night Vision [1:57] - This featurette is on storyboarding. The storyboard artist Brick Mason talks about how Shyamalan likes to go through the storyboards over and over in the early stages to learn what’s working and what isn’t. Shyamalan wants to see everything clearly, and the final shots often end up really close to the sketches. Producer Jason Blum and director of photography Michael Gioulakis also discuss the process.

The disc is front loaded with trailers for Seven in Heaven, Fighting with my Family, Doom: Annihilation, and Arctic, but you do have the option to skip each one or go straight to the main menu.

The discs come in the normal blue clamshell case with a cardboard slip cover. Inside is a sheet with the digital code for the film for Movies Anywhere. On the reverse is a code for another free movie if you sign up for email updates from Universal Studios.

If you have seen the first two films, Glass is definitely worth a watch, and the conclusion is interesting and thought provoking. If you are new to the films, it can still be enjoyable, but perhaps a bit confusing.

If you are a fan of the films or of bonus features in general, this is a film that is worth buying for the extras, because there are so many. Some are better than others, but either way, it’s a nice collection of them. I was also pleased that there are a lot of deleted scenes which discs don’t always include.

All in all, Glass is an excellent conclusion to the trilogy and worth a buy.
Twitter
BotonSocial por: SocialEmpresa
Category: DVD Reviews