Ant-Man and the Wasp picks up after the events of Captain America: Civil War, with Scott Lang/Ant-Man (Paul Rudd) on house arrest after having breeched the Sokovia Accords.

Lang wakes up from what he believes to be a dream from his time in the Quantum Realm (see Ant-Man), where he sees Janet van Dyne (Michelle Pfeiffer) and experiences one of her memories.

It is soon revealed that Janet, husband of Hank Pym (Michael Douglas) and mother of Hope (Evangeline Lilly), who they had all thought to be lost in the Quantum Realm, is in actuality alive and contacting Scott. 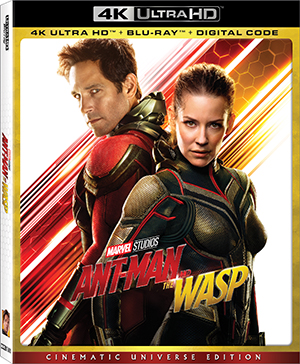 Scott struggles with breaking his court-ordered house arrest and how it could affect his visitation rights with his daughter, Cassie (Abby Ryder Fortson), but eventually helps Hank and Hope, who now has a functioning suit of her own to become the Wasp.

Along their journey to recover a piece of equipment they need to open a tunnel to and stabilize the Quantum Realm, they run into trouble with Sonny Burch (Walton Goggins), who wants to steal and sell their tech, as well as Ava/Ghost (Hannah-John Kamen), who is after the tech for her own reasons and will do anything to get it.

While the film takes place after the original Ant-Man, as well as Captain America: Civil War, you don’t have to have seen them to enjoy the movie, though if you have time, I recommend you do, especially Ant-Man. This sequel takes that film and makes it bigger (often times literally) and better.

The characters are relatable, especially Scott, who has turned his life around and struggles to follow the right path and be there for his daughter. The main characters are well fleshed out, and it’s great to get to see not only Scott partner with Hope, but also them working together with Hank.

Even Luis, Kurt, and Dave play their parts and really bring a lot of humor into the mix, especially Peña as Luis.

The main villain of the piece, the Ghost, was also written in a way that you could feel for the character, which helps to make her sympathetic.

There is a lot of humor in the film, but not in a way that detracts from the action. One of the things that I love is how there are some wacky things that happen, from giant ants playing the drums, to a sixty-five foot Ant-Man, yet they somehow fit. You easily get sucked into the world where anything is fair game. The size-changing humans and objects actually add to the fun action.

Also, the effects of the film when dealing with an ant-sized world are spectacular and realistic. You really feel like you have shrunk down to the heroes’ size.

The Quantum Realm is also strange and beautiful and adds to the overall feel of the film.

In the end, you don’t need to be a fan of Marvel to enjoy the film, but if you are, all the better. Either way, Ant-Man and the Wasp is an enjoyable movie that will keep you entertained throughout.

Each set of features has the option to play all at once or one at a time.

* Back in the Ant Suit: Scott Lang [5:56] - Producer Stephen Broussard and Director
Peyton Reed, as well as members of the cast, talk about Paul Rudd as Ant-Man,
working with him, and how he injects a lot of humor into the character. Rudd
himself also talks about his character. In between, both movie segments and
behind the scenes clips are played.

* A Suit of Her Own: The Wasp [5:19] - Reed, Broussard, and Kevin Feige talk about
Evangeline Lily, the Wasp, and bringing the character to life. Lily herself also
weighs in.

The design of the suit is discussed, including Ivo Coveney, the head of specialty
costumes, who talks about coming up with a “gilver” cover, using layered golds
and silvers.

Some other members of the cast also discuss Lily.

* Subatomic Super Heroes: Hank & Janet [4:10] - The actors talk about working
with Michael Douglas and Michelle Pfeiffer, and their characters. They also talk
about themselves and each other.

Pfeiffer also talks about the importance of her character in the comic books and
about being able to play a superhero at this phase of her life.

* Quantum Perspective: The VFX and Production Design of Ant-Man and the
Wasp [7:05] - The director talks about wanting to use the shrinking and growing
technology in different ways than the original film and about making things
photorealistic as most of it takes place in the real world. He also wanted a real,
tactile functioning lab.

Production Designer Shepherd Frankel gives a tour of the lab and the feelings
they wanted to evoke. Inside there are things of altered scale. Broussard
continues with examples such as a lightbulb and clothespin.

Frankel continues on to show the quantum gate. Peyton wanted to reference
traditional time tunnels but take it to a new level.

Broussard and Reed talk about filming at Pine Wood Studios in Atlanta and how it
was expanded when they returned for the second film. They also discuss using
other areas of Georgia to create different locations, from the city to more rural
areas.

The location of the Ghost’s is discussed, as is shooting some scenes, like the car
chase, in San Francisco.

Executive Producer Victoria Alonso talks about using the changes in scale for
humor.

Also discussed is going back and forth from micro to macro consistently. Feige
talks about the Quantum Realm.

* Gag Reel [1:32] - As to be expected, this feature is full of mistakes and the
cast fooling around.

* Stan Lee Outtakes [0:47] - This one is outtakes of Stan Lee saying many
different lines after his car shrinks. It seems like they might be ad-libbed.

* Tim Heidecker Outtakes [1:29] - This is different versions of lines from the
tour guy on the whale watching boat.

Deleted Scenes: - These are available with or without commentary by Director Peyton Reed

* Worlds Upon Worlds [0:48] - In the scene Hank and Janet are in the Quantum
Realm when Janet uses some kind of translator technology to get past the
creature they come upon.

In the commentary, Reed talks about her showing that she knows how to
handle the world and doesn’t need to use combat.

* Sonny’s on the Trail [0:50] - In this scene, Sonny and his henchmen go to a
library to check out video from a surveillance camera of Pym’s lab shrinking.

Reed describes the scene and also talks about the Scientology joke that they
took out. 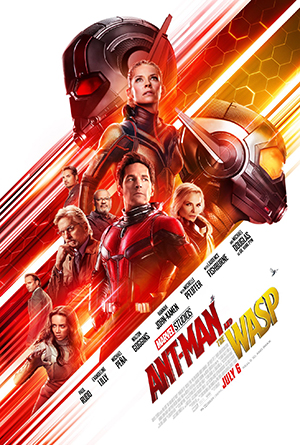 The “Cinematic Universe Edition” comes with a 4k Blu-ray and a standard Blu-ray in the normal black clamshell case. Included is a lenticular slip cover that changes to show Ant-Man and the Wasp with and without helmets.

I was disappointed to discover that there are no bonus features on the 4k disc. I would think since there weren’t many, that they could have fit on the 4k disc as well. It’s annoying to have to switch discs just to see the extra features. This is, however, printed on the slipcover and case if you look for it.

Included exclusively with the digital version is a Magic University Commercial and the feature "10 Years of Marvel Studios: The Art of the Marvel Cinematic Universe," described as "what it takes to bring MCU to life."

There is also a double-sided insert advertising Disney Movie Club and a code.

Conclusion:
If you are a Marvel fan or one of the Ant-Man franchise, this is definitely worth a purchase, especially in crystal-clear 4K. There aren’t tons of bonus features, but what is there is a good selection and worth a watch.
Twitter
BotonSocial por: SocialEmpresa
Category: DVD Reviews