The ten-episode science fiction series follows Academy Award Winner J.K. Simmons in a dual role, as Howard Silk, who has a boring desk job in a Berlin-based United Nations agency at the Office of Interchange. He works in the low-level Interface division, where he exchanges call-and-response messages with other agents behind glass. He, however, knows nothing about the purpose of his role at the agency and doesn’t ask.

He has the same routine every day, from going to the park to play Go with his friend, to going to work, to concluding with his visit to see his wife Emily (Olivia Williams) at the hospital, who has been comatose for six weeks after being struck by a car. 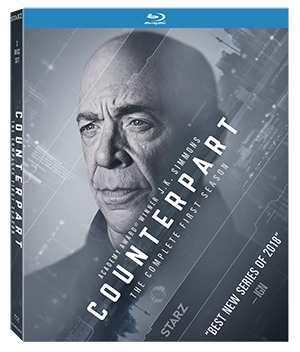 His life changes when at work he is flagged by security. He is led to a room to talk to Director of Strategy Peter Quayle (Harry Lloyd) and Director of Counterintelligence Aldrich (Ulrich Thomsen). Quayle tells him that someone has come from the other side and defected, and he is only willing to speak to Howard.

Howard is briefed and learns that the agency he works for protects a life-altering secret. After the Cold War, there was an accident at the area now known as “The Crossing,” which opened up a connection to a parallel world similar to our own, which the agency oversees. Both worlds were identical in every way until the event took place, at which time everyone’s paths diverged.

Aldrich brings in Howard’s counterpart (Silk) from the other world: a doppelgänger of himself (hence known as Howard Prime), who on the other side works higher up in the company as a spy and has come over to make a deal giving our government intel about an assassin (Sara Serraiocco) who has crossed over to our side with a hit list.

Howard is pulled into the shadowy world of secrets and espionage, where he must become the man he was perhaps capable of being, in order to help save those he loves and keep his world from falling apart.


I wasn’t sure what to expect going into the series for the first time. I was up for a parallel universe story, but I’m not usually too keen on a spy thriller. However, in the end, it didn’t matter, because I became intrigued really quickly.

A big part of the appeal is Simmons, who is brilliant in his dual roles. There never a question which version of Howard he is playing, because he does such a superb job of slipping back and forth, and of course watching him as one pretending to be the other is even more fun to watch.

The visuals of filming the actor twice are also excellent: you never notice it; it’s really natural.

The writers did a fantastic job of making you invested in both Howards and making you care about all the characters, really. Each person (and in many cases their counterpart) is fleshed out really well.

Aside from Howard, I also enjoyed Williams as Emily Prime. It was fascinating to see her interact with Howard.

Another standout to me was Lloyd. As the season progressed his character becomes more and more interesting. 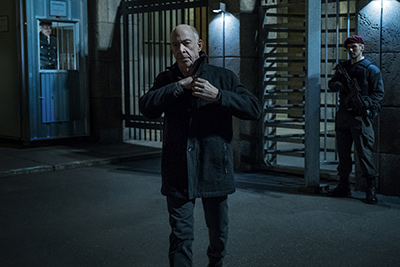 As for the script itself, it was very engaging, and the sci-fi and spy elements really blend together well in a way that I feel fans of both will enjoy it. It’s also just overall written really well and captivates you from the beginning.

The action scenes are also intense and enjoyable.

On a whole, the series is enjoyable and full of twists. If you like this kind of genre, I highly recommend it.

Season Outlook [1:58] - Creator/Executive Producer Justin Marks, as well as performers Simmons, Williams, and Nicholas Pinnock, give an overview of the series, giving a brief explanation of the parallel universe. They discuss things such as how the universes split, as well as explain about the counterparts, and more.

Inside the World of Counterpart - This is made up of ten segments, one for each episode. Each is a clip of Marks talking about different things related to the episodes. Oddly, there is not an option to play all. Thankfully each of them remind you to make sure you watch each episode before the accompanying featurette if you don’t want to be spoiled. (Also you should skip this part of my review as well if you haven't seen them, as it does contain some details of the episodes). Note that these are the same ten behind the scene segments that originally aired after the episodes on Starz.

Inside the World of Counterpart: Episode 1 [2:12] - Marks talks a bit about what viewers will see over the season. He talks about the challenges filming the encounter of both Howards in his apartment. They didn’t want to draw attention to the visual effect, but rather make viewers forget that it’s the same actor.

He also discusses a bit of the themes of the series and how it relates to the game Go as a metaphor of how lives are built and how identities can change over time.

Inside the World of Counterpart: Episode 2 [2:08] - In this episode, we get to not only see two versions of Howard, but also of other characters, with this episode focusing on Baldwin (Serraiocco) and her counterpart Nadia. He talks about how they seem different on the surface, yet are the same. He discusses the theme of bringing to task the question of if we can really escape our own identity. 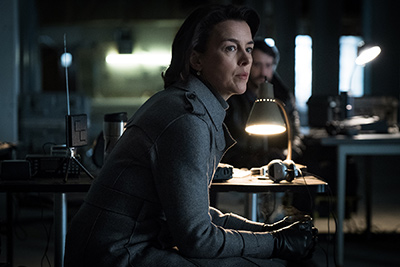 Inside the World of Counterpart Episode 3 [2:01] - When the Crossing is shown in the episode, it was important for them to make it look like something out of our world rather than something like a glowing light. Mark talks about Shaw explaining that we have to go through it alone, as it’s an internal and personal crossing. Marks also says that there are a lot of Easter eggs hidden in the crossings that give clues about the origin of the Crossing.

Marks also talks about the character of Emily and enjoying the reveal of who she really is.

Inside the World of Counterpart Episode 4 [2:00] - Marks discusses the theme of the episode and seeing the world in different ways as you grow older and more aware.

It was important to introduce Clare (Nazanin Boniadi) in a moment of conflict showing her bond with Baldwin. He explains how almost every character in the show is fundamentally lonely and their encounter with their counterparts often makes them more so.

The scene with both Howards playing poker was also important, because how the way they play the game shows how they are in the real world. It sets up a lot of the coming tension between them.

Inside the World of Counterpart Episode 5 [1:47] - Marks talks about dealing with a science fiction premise in the most boring and mundane fashion and how sometimes the best way to hide such a big secret is in the mundane. He talks about the structure of the Interchange building and how the higher you go, the more information you have.

He also discusses the reveal that Emily has been having an affair, and how both Howards react differently.

Inside the World of Counterpart Episode 6 [2:04] - Marks talks about the last moment of the episode: the reveal of who the mole is and how she is related to the other characters.

He also discusses Howard Prime’s friendship with the Butcher, and how he feels compelled to protect his wife, not just with money and things, but with the truth. He talks about loving someone not for who they are but for whom they would rather be, which is a theme of the season.

Inside the World of Counterpart Episode 7 [2:03] - Marks discusses making the villains in the show sympathetic and revealing Clare as an innocent child. 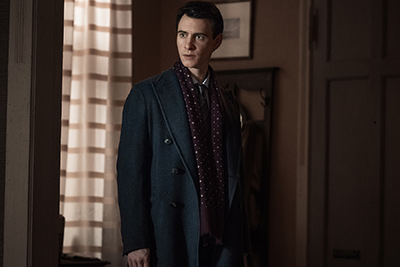 He also talks about Quayle and his resourcefulness and him trying to reveal Clare’s lies when he’s drunk and that it will come back to haunt him.

Inside the World of Counterpart Episode 8 [2:03] - Marks says the episode calls back to episode six about how the person you love is not always the same as who they are trying to be. The characters have flaws that they have to overcome.

He talks about Simmons’ performances in both sides of the Interface scene and how it’s the point of no return for them. Their key difference between them is Howard’s ability to forgive.

He also discusses Quayle and his impossible choice with no right answers. He talks about him wanting to confess to Aldrich in a way, but he is weak and blames Howard.

Inside the World of Counterpart Episode 9 [2:05] - In the episode all of the characters are in a state of displacement standing between two worlds. They wanted to make sure that each character was at their place of crisis. Howard lashing out at Casper (Adeel Akhtar) is a projection of himself for committing the same crime: falling in love with a version of life that he doesn’t own. He realizes he doesn’t belong there.

Also discussed is a scene between Howard and Emily Prime, where he realizes he has all of these memories that she wasn’t a part of and that he needs to get home, which pays off in the next episode and starts a different phase of his relationship with her.

Lastly, he talks about Angel Eyes (Nolan Gerard Funk) landing in the center of the Crossing and that the meaning of that will be revealed in the next episode. It has interesting diplomatic implications.

Inside the World of Counterpart Episode 10 [2:11] - The season finale is about the location of the Crossing, where Angel Eyes has left himself for the diplomats to figure out what to do, who should claim the body. It’s the first opportunity to experience management in a real way. Instead of getting to see who runs the office on the other side we get bizarre video cameras run by proxies. It’s a fun taste of the strange way the office works.

The ultimate theme is asking if we can escape who we are. Howard Prime runs from what’s right, yet is now at a precipice. He has everything he needs to disappear but has appointed himself as Emily’s protector. We’re beginning to see our Howard coming alive within Howard Prime, the good self. We see the opposite in Howard. There is an ambiguity to which self is his true self. Season two will focus on answering that. 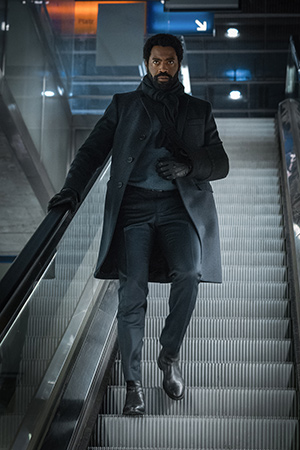 Packaging:
The series comes in the normal blue clamshell case with three Blu-ray discs with four episodes on the first disc and three on each of the others. The bonus features are on the last disc.

There is also an insert included advertising the Starz app. There is no listing in the package as to what is on each disc, which is really annoying.

Equally annoying, is each disc actually lists every episode, so you can’t tell if you have the right disc without actually trying to play an episode.

Also, the discs list the ability to bookmark as a bonus feature, which is odd in my opinion.

Final Thoughts:
If you are someone who is just after the set for bonus features, it’s really not worth it. The only new feature is the season outlook, which really doesn’t add anything. However, if you haven’t seen the show or are a fan of the series, the set is definitely worth a buy, and the bonus features are enjoyable, even if they are very short.
Twitter
BotonSocial por: SocialEmpresa
Category: DVD Reviews