Recently, Britbox premiered the three-part drama, Stonehouse. The series is based on the almost unbelievable life of MP John Stonehouse (Matthew Macfadyen). Seemingly a devoted father and husband with a perfect life, he started spiraling out of control when he was accused of fraud and espionage, which culminated in him faking his own death. The series also stars Keeley Hawes as Stonehouse’s wife Barbara and Emer Heatley as his secretary Sheila Buckley.

Writer of the series, John Preston, was somewhat familiar with the story from the beginning, as he lived through it, but at the time it didn’t make a big impression. “There was a lot about the story that I didn't know,” Preston revealed to SciFi Vision during a recent press junket. “But for me, having been brought up to believe that our rulers tended to behave in a kind of level headed and dignified way, it was the first inkling that I had that that might not necessarily be the case. So, it was a kind of eye opener for me. But it was really not until I went back and started researching it, that I realized just how rich a story it was.” 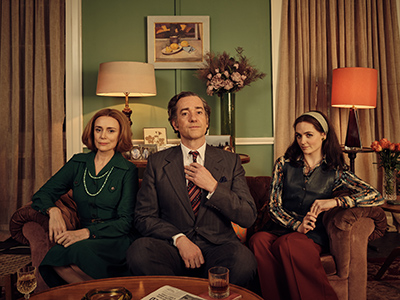 The director, Jon S. Baird was only two when the scandal broke, so he was not familiar at first, but he was intrigued. “I'm very interested in political scandals,” the director told the site. “…When I got the script, it was great, because I didn't know where it was going or where it was going to end and could not believe that it was a true story. I just straight away Googled everything and [thought] that this is remarkable, that this is true.”

Star Heatley, who also talked to the site during the junket, was not familiar with the story either, although her parents remembered it clearly.

This is only the second television role for the actress, and she looked up to Keeley and Macfayden who are married in real life. “I mean, what a dream; they are so amazingly talented,” Heatley told the site. “I just really tried to just take notes for the whole process on how they work and and how they are on set…They have so much fun together, and that's really infectious. They're always looking for ways to lift more humor out of the scene and to find little moments that aren't scripted. So, it was just surreal to get to do that, and to work with a couple that are married is always a brilliant dynamic, but it was just a heap of fun.”

For more, watch the full interviews below and be sure to watch Stonehouse, now available to stream on Britbox.