Today, Amazon FreeVee released another episode of the hit series Leverage: Redemption. On the show, Beth Riesgraf plays the part of Parker, “The Thief,” however, as time has passed the series, Parker has done more and more grifting, of which her skills are improving. When SciFi Vision spoke with Riesgraf about her character during a recent interview, one of the things she discussed was Parker’s growth and how she’s gotten better at that grifting part of it. “In the earlier seasons of Leverage,” the actress told the site. “She struggled with keeping a character together. She would crack, and that was part of the fun of watching her. I kind of thought, ‘She has gotten good at social kind of veneers and things like that when she's in a con,’ but I don't want her to lose that thing entirely, because it's not as much fun. So, I think ultimately, she is a thief. She's an adrenaline junkie; that's what her mind goes to. ‘Where's the prize? What are we going after?’ She's all instinct. So, I think, it was important with the writing and everything to make sure that you could see her as a leader and someone that can run a team efficiently and proficiently and not go off on the wild all the time.” 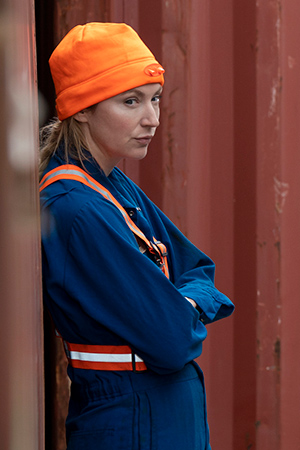 The actress likes playing that side of Parker as she’s grown, but also the quirkier parts. “The growth over the years has been so wonderful, because she's really been on a journey as a human being and also as a teammate to all these guys,” said Riesgraf. “She was a lone wolf who had to learn how to be a part of a family and trust that she could actually have a family in this team and that, that that would work out for her. My fear is always that she'll get too normalized. I don't ever want to normalize Parker…[The writers] gave me this amazing playground to play in, and I think keeping that through-line while allowing her to grow but not lose the essence of who she is, is my main priority. I think it's good. The growth is good, but I also think the Parker everyone knows and loves is also still all these other things. So, I liked the balance of both…I think it's so rare that you get a character who gets to be so many things and play so many different sides of their personality. I love all of that.”

During the interview, Riesgraf also talked about directing again, Parker and Hardison (Aldis Hodge)'s relationship, some of her favorite costumes, improvising lines, and much more. Watch the full interview below, and check out season two of Leverage: Redemption on Amazon FreeVee.