In season one of La Brea people were just getting to know each other and they didn’t all get along well. Lucas (Josh McKenzie) was especially abrasive. “When you're lumped in with a group of people you've only just met,” McKenzie told SciFi Vision during a recent interview, “you start looking for the tropes, the archetypes of these people, and you kind of don't look much further than that, because it's easier for you, in a survival sense…I think Lucas was the outsider from the get-go and made it pretty clear that he was the outsider and he had a lot of anger.”

Lucas especially butted heads with Scott (Rohan Mirchandaney). “I think Scott saw [Lucas] as somewhat of a bully with the way that he behaved…and I think Lucas kind of saw Scott as maybe weaker than what Scott actually is,” said McKenzie.

“I think a lot of the characters in La Brea can really dismiss Scott at times,” added Mirchandaney who also took part in the interview. 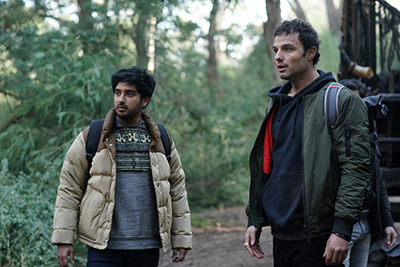 Slowly a friendship started to form. “The nice thing was that Scott kind of persisted with that relationship in season one,” McKenzie told the site. “It was kind of pushed at Lucas, and they obviously had their big conflicts…but as time goes on, they realize they're actually part of a community; they have to rely on one another, and in season two, they definitely learn to rely on one another.”

“Even though Lucas and Scott do butt heads quite openly and on the surface, they still have time for each other,” added Mirchandaney. “Lucas still makes space for Scott, and that time and understanding is really powerful and important. I think that means a lot to Scott, to be taken and received in that kind of way, not to be instantly dismissed and just cast aside…There’s a lot of understanding and trust that develops with these two characters that I think is really, really strong and a good shift from the place where they originally began and [met].”

For more from the two, including how Aldridge (Ming-Zhu Hii)’s death affected Scott, the turning point for Lucas’s behavior, working with green screen, and more, watch the full interview below, and watch an all-new episode of La Brea tonight and every Tuesday night on NBC.