Tonight, AMC aired an all-new episode of Anne Rice’s Interview with the Vampire. The reimagining is a contemporary take of the gothic novel that follows the tragic love story of Louis de Pointe du Lac (Jacob Anderson) and Lestat de Lioncourt (Sam Reid), the vampire who turns him.

Rae Dawn Chong plays the part of Florence de Pointe du Lac, Louis’s human mother, who meets an end in tonight’s episode. The actress recently spoke to SciFi Vision in an exclusive interview about working on the series, including the quirks of playing a dead body, researching history in New Orleans, and more.

SCIFI VISION:  Obviously you’re character is gone in this episode. 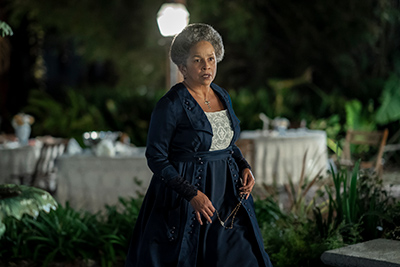 I was going to say, this is supposed to be a post mortem, so it’s hard to to ask you specifically about this episode! I mean, did you actually play a corpse laying there?

I assumed it was.

Can I tell you something? The coffin was a real coffin, and I didn't realize this, but they push out the chest part. Because I guess when you're dead, when they do autopsies, they take out the middle bit, your guts, which makes sense. So, you're just really a shell and so then they push out the chest. So if you're still a human being not quite at that point, when you lay down, it's deeply uncomfortable. So, I was a little bit appalled that coffins weren't more comfortable.

I think it's strange, though, they use a real coffin. I don't know, that's a little creepy. But I guess it's probably easier for the props department to use.

I think it's kind of fun, because we should practice that moment; we're all going there.

Is it hard, though, to not move and lie still and not interact with everybody?

No, because as long as you're not puffing, you can get into a really nice alpha state, and it's so pleasant. And I grew up on set; all my life I've been on them, so I actually can get into a deep sleep in the middle of strangers hammering and working. My father owned a lot of nightclubs, so loud noise is actually soothing for me. Isn't that funny?

It was, I'm sure, an easier day of work, though, at least. [laughs]

Well it was hot, actually; it wasn't that easy, and it was late, late, late, late, late. So, one thing I'll say, it's never comfortable. It was sad to die, but I was glad that I wasn't made into a vampire. I don't think I would want to be a vampire.

[laughs] All right, so talking about the rest of the show, how did you get the role? I assume it was an audition?

It was an audition, and I enjoyed my audition. I mean, it was a self tape, because we were going through COVID. It was in August, so it was a long time ago, and I completely didn't think [about it] after I sent it in. You just should, for your own mental health, not think about it, and I didn't. Then, I got a call practically six months later, and they said, “Rae Dawn, you got an offer for Interview.” I was completely surprised; it was out of the blue, and I just want to say to the universe, “thank you.” I'm so delighted that I got to do that and got to go be in New Orleans a lot and hang out with such a wonderful cast, and I loved our directors. Everything was exciting. It was just totally wonderful.

It's a fun show. Had you read the book series before getting the part? Did you go back through it?

Yeah, I read it when it first came out in the 70s. I read Interview…only the first one. I didn't read the whole series. I think I started one of them, but I didn't carry on. I liked it very much. I was young, super young when I read it, and it was the first time I'd ever really thought about the idea of eternal life. Then, of course, I had to figure out, what's the metaphor? And because I noticed - like I don't know about you, if you follow witches? I like all of the Alice Hoffman books. I like things that deal with the unknown or the extra, the other. So the idea, “what's a metaphor for vampirism?” I had to think about that. And it became “Oh, it's a way of being eternal,” and “why are we all obsessed with living forever, or at least being?” I think it's because intuitively we know some part of us doesn't die. And I heard that Anne Rice, her daughter passed away and that was the motive. She was in a dark place when she started these. It made me think “Oh, this is interesting.” So, it was sort of birthed out of a place of grief, and you can feel that, the patina, through the whole series.

Was there anywhere else though, other than reading about Anne Rice and kind of the script that you were inspired specifically by for the character, or anybody else you thought about as you created it? 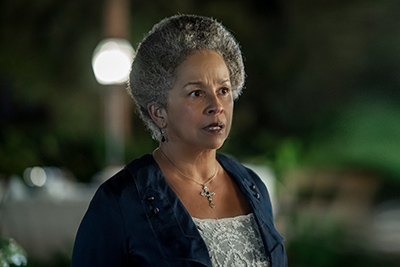 Well, we did a little bit of research when we got to New Orleans and we, Kalyne Coleman and I, went to the Creole Museum and we talked to some historians to see how they lived and what the difference was between blacks and Creole, and there was a vast economic difference. So, it was exciting to learn some history that you don't get taught normally; you have to sort of seek it out. Then, just going to New Orleans in general…it's basically every corner, everywhere you go in New Orleans is history. There's just history. So, you can't help but think about, you know, Marie Laveau. Everywhere you go, There're witches, voodoo, you know, a park that celebrates, whether it's Louis Armstrong Park, and then there's Congo Square where they used to sell slaves, or you can go into a restaurant and see little shackles where they put little babies. So, there's so much history; a lot of it's very dark. We even broke into the nunnery. There's a convent in the middle of the French Quarter, and we broke into it - I broke into it. I opened up the gate. It was locked, but it wasn't a very good lock, so I just opened it. But there was really nobody there, so it was nice to walk around this incredible piece of history in the middle of the French Quarter and see, oh my gosh, the nuns. This is the oldest building in the Quarter, because it's been there since before, I think early, late 1600s. So, it really was one of those things where you went, "New Orleans has so much history!"

Can you talk about working with the costumes, and how much did that inform your character?

Well, costumes always do inform us, right? We're wearing bustles and a lot of material. I loved it. I love that I got to wear a lot of crucifixes, because Mama du Lac is very clear on her beliefs. I mean, it's New Orleans, so there're churches as well as vice. I think that the costumes helped tremendously. You can't help but get into character when you've got, you know, a church lady hat on and a bustle. I mean, I will say it does challenge my vanity, because although I'm 61, it's hard to see yourself looking like Mama du Lac. [laughs] It's like, “Oh God, I'm now this person.” But it helps a lot.

Was there anything else that you found difficult about the role?

Well, the accent was tough. We had a person working with the accent, and that was always sort of tricky, because you can't just like whip out in your normal voice. So, that was a bit of a thing, a mountain to climb up. And of course, Jacob is from England, and then Sam's from Australia. So, we all had to kind of watch our P's and Q's literally. That was exciting. And I loved getting to have little babies. You know, I always adopt on set the younger people, and Kalyne Coleman and Christian [Robinson] were just dreamboats to work with. And we have great music. I mean, the whole thing was just dreamy. I loved it.

You've obviously been acting for a long time, but is there still things that you've learned about your craft from the show?

That's a good way to look at it.

Is there a role that you'd still really, really love to do in your future, like either a character or a particular type of role?

I'm developing something. I'm developing a show. I don't know if I'll sell it, but I really would like to. It's a story about me as a woman of age who no longer is the “it girl.” So, I have no skills. I've always been an actor, but you can't take actor skills really and monetize them unless you're a teacher or something. So, I actually, as Rae Dawn Chong, I get a job at the mall, and it's a story about values. So, I'm developing that and working very hard to sell that. It's sort of like not necessarily the anti-Kardashian, but I sort of take it as if - which I think would happen, is I get a job, a regular job, a real job, and I learn about how to be, and I learn about what's important. And what is important? The moments.

Yes, it's scripted. It's a comedic narrative.

Hopefully it will happen. Throw it out to the universe.

The other thing I want to ask you about, and I don't know anything about it, other than what I’m  assuming it’s based on. I was looking at Internet Move Database, and it says you're doing The Raven. Can you talk a tiny bit about that? What's that?

Yeah, I just have a very small role. I helped a friend of mine, Mike Manning. Gregori Martin asked me to come in, and I play a tiny, tiny role. I have one scene, I play a nurse. I have one scene with Tony [Todd]. He's the priest. So, I don't know much about it, except I will say to you that the acting…is pretty damn good. So, definitely watch it when it comes out. I wish I knew more, but I literally just did two days on the show. I walk in, and I play a nurse, and I help this woman because she's dying.

I [also] made in a movie called The Mistress, which apparently is amazing. That's a horror film with John Magaro, the guy from [First] Cow…[He] stars in this as an artist, and it's about a haunted house…I hear it is really good. I am going to see it. I'm going to the film festival in Fort Lauderdale in November, this next month, to promote it, and I haven't seen it yet, but it's called The Mistress. I have a bigger role in that. I play the mom.
Twitter
BotonSocial por: SocialEmpresa
Category: Interviews