Reginald the Vampire, which premieres tomorrow on Syfy, follows Reginald (Jacob Batalon), who having been turned into the undead in a world of beautiful and fit vampires, doesn’t belong. The unlikely hero still deals with human issues like crushes and bullies, discovering his undead life is just as complicated as his previous one.

The story is based on the novel series Fat Vampire by Johnny B. Truant, and according to showrunner and executive producer Harley Peyton, the world he invented creates a dichotomy that makes the show different. “[Vampires] seek a kind of perfection that's all about beauty,” he explained during a recent TCA panel. “That's where we get into issues of body‑shaming and body‑positivity, and Reginald, of course, just doesn't fit the mold…It's all about that conflict between what we think of as beauty and what we think of as sort of inner truths and the beauty inside us.”

“I think the foundation of our show is very rooted in real emotional dynamics,” executive producer Jeremiah Chechik added, saying that it deals with how we fit in and relate to others. “It's really about how, when you die, you can live better; you can become a better person, or not. Those are the real reversal of tropes that stand out.” 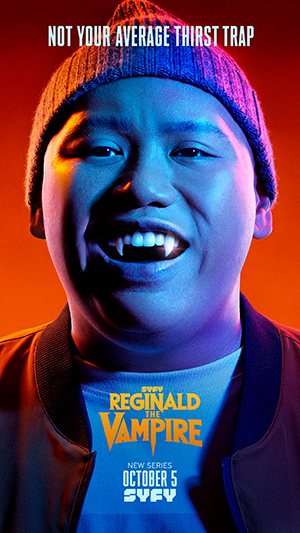 “It's about the human condition,” added star Batalon, saying that his character learns life through death. “[There’s] a very poignant and deeper sort of meaning than just wanting to kill people and look super-hot.”

Batalon is of course known for playing Ned in the Spider-Man franchise, which he said has really affected the way he behaves on a set. “Watching really successful people sort of operate and work with others has really informed my experience on this show,” he told the press.

When talking about what his favorite part about Reginald was, the star described his character as both thoughtful and enigmatic. “He's very much uncertain about life,” said the actor, “but he's very aware of where he is in his situation, in comparison to how society sees him. That kind of in a way made me feel a lot more grounded in my life, because it's this idea of…either you just accept your fate, or you change it.”

“Everything about my part was just very beautiful,” Batalon added. “This was a very full arc journey, and it's really great to see where he starts off and…see where he goes.”

Reginald's maker in the series is Maurice, played by Mandela Van Peebles, who loved that this part enabled him to do things he hasn't before as an actor. “This was my first time playing a vampire,” said the actor. “I tried not to have too many expectations going into stuff, but after a while of doing some research and trying to develop my character, I realized that I had the opportunity to channel people from different generations...Also, just taking the traditional idea of a vampire and just flipping it on its head. And we see so many diversities in Reginald the Vampire that we don't usually see with this kind of a supernatural vampire show.  So, that was a lot of fun, and I wasn't expecting it to mean so much to me.”

Reginald's love interest is played by Em Haine, who is the grounded one, according to the actress. “Sarah is a human, so I think that I held down a lot of the realness,” she explained. “I felt like I was able to grow with Sarah as a person, because she's just out there as a 20‑something trying to find her place in the world, and I get it.”

Also at the panel was Savannah Basley, who plays antagonist Angela. “I just love how really strong she is. She's very strong and powerful...and someone who, I think, kind of claims this full autonomy over herself, and that was something that I really enjoyed playing, someone who wasn't afraid of her sexuality, but someone who also knew that she was very powerful, and she was a very smart woman as well.”

For more of the new unique series, be sure to tune in to the premiere, tomorrow on Syfy.
Twitter
BotonSocial por: SocialEmpresa
Category: Interviews