The Shudder Original, What Josiah Saw, which premiered on the streaming network earlier in the month, tells the story of a family at their farmhouse who confront long-buried secrets that have damaged their family. The film stars Scott Haze (Jurassic World Dominion, Venom) as Thomas Graham, who recently spoke with SciFi Vision in an exclusive interview.

The actor was attracted to the story from the beginning. “I read the script eight years ago, and I liked it so much because of how bold it was that I came on board,” Haze told the site.

He also told SciFi Vision that he was involved behind the scenes as well, and had been for quite some time. “I helped put the film together alongside Vincent Grashaw,” said the actor. “That's why I'm an EP on the film, as I helped secure a lot of the financing for the film. So, I was very adamant about continuing forth in the journey. Obviously, it's been seven years. We had a lot of different obstacles that we had to face in getting this movie made, but Vincent never gave up; I never gave up, and here we are seven years later, and it's pretty cool.” 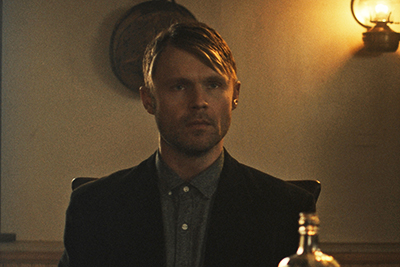 When asked about preparation and inspiration, Haze talked about the importance of treating the character respectfully. “I think that a lot of what this film tackles is what mental health issues can look like if they're not taking care of,” said Haze. “I have a friend who I was friends with for many years, and he's having a lot of mental health issues right now. It's really awful the way our system is set up in trying to help out people who are really struggling, and they're in the grips of a psychotic break. So, I knew that there was a big responsibility to honoring what that looks like and doing it justice. So, that was what my purpose and my passion, just to as respectfully approach the material as possible.”

One of the important relationships in the film is between Thomas and his father, who is played by Robert Patrick, who Haze was already a fan of. “I grew up watching Terminator 2 every weekend…It was very surreal at first to be with him playing my dad. I think when I was a little kid, if you were like, ‘Hey, you're going to grow up one day to be an actor, and that guy is going to play your father,’ I would [have said], ‘You’re crazy.’ But I loved working with Robert; he will be a friend of mine for life. My best times on the film were the moments with him just talking, because we just kept laughing around each other. He just instantly makes me laugh, and I think I do the same for him when we get in proximity to each other. So, we just had a lot of fun.”

For more from Haze, including getting into character, what film franchise he’d like to tackle next, and more, watch the full interview below and check out What Josiah Saw, now available to stream on Shudder.