Moonhaven, which airs Thursdays on AMC+, takes place in the future and follows Bella Sway (Emma McDonald), a lunar pilot and smuggler, who after arriving on the moon in the idyllic town of Moonhaven, is accused of murder. Bella must work to clear her name while also trying to uncover the conspiracy surrounding the artificial intelligence that is Earth’s last hope.

The series is such a unique show. It was really the rich story that solidified Kadeem Hardison, who plays Detective Arlo, wanting to play the role. “Peter Ocko, our showrunner and creator, wrote an incredible script,” the actor told SciFi Vision. “Just the culture that we are living on in the moon, and to know that I'm third generation mooner…It was an easy choice for me to really go after this with both hands.” 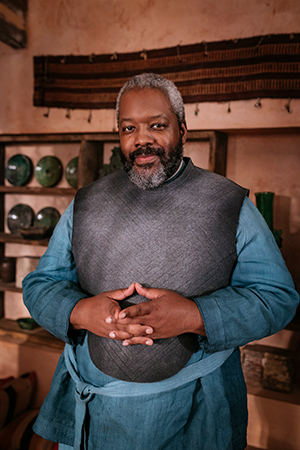 One of the highlights of the series is the relationship between Hardison’s character and that of his work partner Paul, played by Dominic Monaghan, who he got along with right away. “We hit it off in the audition process,” said Hardison. “I knew he was going to be Paul, and I wanted to be partners.”

“I've always liked that buddy cop scenario, in all forms of it, and this was another version of it,” he continued. “As an actor, he's curious…but he's always looking for another angle. Which was exciting for me because I can fit in; I can find my space easily and without pushing. When he pushes for something, then it draws me in or it draws me out, and the next thing you know, we're both looking for other angles. The scenes with him were easy, because he's good…We got along fantastic.”

For more from the actor, from his favorite part of the set to working with special effects and stunts, and even what kind of detective he thinks he would make, watch the full interview below, and be sure to tune into Moonhaven, available to stream on AMC+.