Tonight, the new series Dark Winds premieres on AMC and AMC+, with the first two episodes available on the latter. Set in 1971, Dark Winds follows Lieutenant Joe Leaphorn (Zahn McClarnon) as he investigates a series of seemingly unrelating crimes. The series is based on the Leaphorn & Chee book series by Tony Hillerman. Chris Eyre, who is a director on the series and is also an executive producer actually worked on adaptations of the book series previously, but this time is different. “I think this is the first time that it feels like it's crystallized into something appropriate to the time and the place,” said Eyre. “Graham [Roland]’s pilot script was amazing, and it spoke to just the contradictions and the beauty of the story and the characters.”

Roland, who is not only also an executive producer in addition to writer on the series but credited as creator, said he hadn’t read the books prior to receiving one from his agent. “That was my first introduction to it,” said Roland. “Then, I was completely taken, not only with the idea of doing a project that was Native centric, there was [also] no white character bringing you into the Native world. It started through the Native character’s POV, and then you experience the world to their point of view. [Hillerman]’s writing was so immersive, the sense of place that you got from his writing, as a writer and trying to adapt it, it gave me a great place to start from, because there was so much there. His books were so rich with detail. There was so much there for me to draw from.” 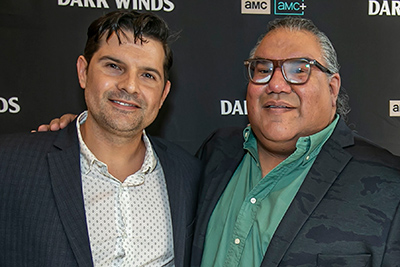 That didn’t mean that adapting didn’t come with work. “There were a lot of rich details about the world, in the culture,” continued Roland, “but even given that, it required much more research than I'd ever done for anything else. So, Chris and I took a trip to the Navajo reservation…Obviously, getting myself acquainted with the Hillerman books [was something I did], but also doing supplemental reading just on the culture and life on the reservation, doing ride-alongs with tribal police officers on the reservation, seeing what it's like to be out there in the middle of nowhere, all by yourself responding to what could be an innocuous call or what could be a life threatening call.”

“We were trying to really get the subtleties of this…[and] the culture of it right,” added Eyre. “…I think we put the right elements together. It was difficult, but along with Graham's script, we just had the right team.”

To hear more, including balancing what was taken from the books with what was added, casting the series, and the possibility of a season two, watch the full interview below and be sure to check out the series on AMC or AMC+. Stay tuned for our interview with the cast.