Today Britbox released the miniseries Why Didn’t They Ask Evans? The story follows Bobby Jones (Will Poulter) and Lady Frankie Derwent (Lucy Boynton) who become amateur sleuths looking to solve a murder and find the meaning behind the victim’s mysterious last words. The three-episode series is based on the Agatha Christie mystery, with a script by Hugh Laurie, who also directs and executive produces, as well as plays the role of Dr. James Nicholson.

Last week, SciFi Vision talked to Laurie during a press conference with the three performers to promote the adaptation about the difficulties choosing what parts to draw from the original vs adding his own ideas to the story. “That's a tricky one,” said Laurie. “I suppose you just have a sort of instinct that, oh, no, that's not going to work here. Something else needs to happen. We need some other ingredient here that you can't really explain why it is; you just feel it. Sometimes I feel when writing I am sort of partially acting as a reader, just reading rather than writing, and when acting, I feel like I'm watching as much as acting…As a reader, or as a viewer, you just get a sense of, I need something different to happen here. I need some surprise, or I need some alteration of energy or pace or something. And as far as I know, there's no great theory to it. Or if there is, I didn't know what the theory is…I think it's just a sort of an instinct…just sort of a rhythmic thing.” 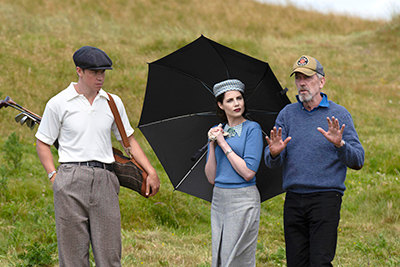 During the conference Laurie also talked about first reading the story when he was young. “I remembered it very, very clearly,” said the actor. “I particularly remember the way…the meaning of the question is revealed, and it is a stroke of absolute genius. I think [Christie] was unique in the way she…just paid out the information very, very gradually with such a sort of perfect sense of timing, so that at the exact moment, she could just flip over the card and you go, ‘Oh my god that's been right in front of me all this time, and I never saw it.’”

Laurie also praised Poulter and Boyton and the rest of cast. “[T]he actors were very diligent. All of them had done their homework. They all came to the set knowing what the scene required, the sort of rhythm of it, the music of it, how to play it, essentially.” 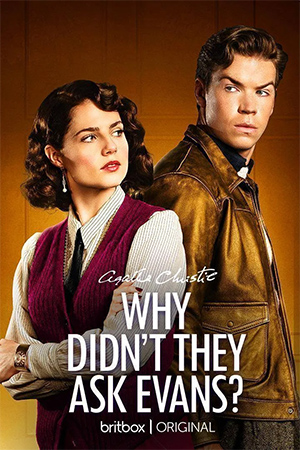 During the interview, the other two performers touched on what they liked about the characters and story. Boynton appreciated the honesty of the characters. “[T]here's something really unedited about these characters,” said the actress, “and very kind of honest in how they present and how they come to the table, and I think that's always incredibly refreshing. I think we're definitely in a period of time where we are checking ourselves more often and kind of wanting to tread quite carefully, and I think that's a great thing, but when you see it in characters that also feel kind of trusting of themselves as well, I think it's a very empowering way to marry both of those two things together.”

Poulter liked that the characters are relatable. “[The story had] two characters you really wanted to spend time with,” explained the actor, “that you could feel genuinely kind of comfortable in the company of these two people. To see them go from kind of amateur sleuths and very sort of relatable everyday people to sort of a professional and legitimate organization by the end was a really kind of thrilling development. The mystery is a big kind of propellant for the story, but so too is how these characters develop and grow over the course of the story, and I think, for audiences watching, the hope is that they'll be able to kind of put themselves in the shoes of, of Bobby and Frankie almost…enjoy some of the same thrills that you see the characters enjoying.”

For an entertaining new mystery series, be sure to check out Why Didn’t They Ask Evans, now available to stream on Britbox.
Twitter
BotonSocial por: SocialEmpresa
Category: Interviews