Recently, the series Halo, which is based on the hugely-popular video game franchise, premiered on Paramount Plus, airing it's third episode yesterday. During a roundtable interview promoting the series, actresses Yerin Ha, who plays Kwan, and Jen Taylor, who plays Cortana, talked to SciFi Vision about what parts they have an easy and more difficult time connecting with.

For Ha, the most difficult part is working with blue and green screens. “I think that was really difficult,” said the actress, “because your imagination has to be on point. They can show you a storyboard and all that kind of stuff, but whatever actually comes to life is so different to how you picture it in your head. [You have] to kind of make sure that that's in check.” 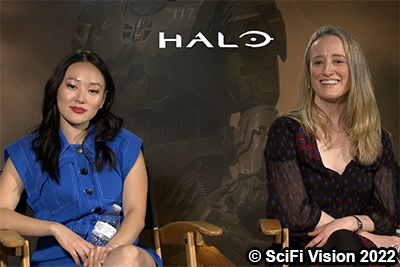 Ha added that the easiest parts are the smaller scenes. “The easiest, I think, is actually the more intimate scenes, just the dialogue scenes that I get to have with Pablo [Schreiber] or [Bokeem Woodbine] or stuff like that, just tapping into that emotional connection. I think it's not easy by any means, but it's I think it's easier for me to tap into, because that's my job.”

Taylor, on the other hand, said that she doesn’t have as much trouble connecting to the character, because she’s played Cortana for so long in the game. “I feel like she's like a glove that I put on,” said the actress. “…Even the sticky parts of her character, things I, Jen Taylor, wouldn't do or don't agree with, I can still revel in, because I get to play with them. So, those are the fun things, for me.”

Taylor told the site that she is able to connect to her sense of humor the easiest. “[She’s] experiencing the world for the first time, in a different way than then a human would, of course,” the actress added.

Having played the character for so long, the actress also touched on how it’s different in the tv series from the game. “The character is in a different place in her journey, for sure,” said Taylor. “We're going to see a different part of her relationship with Master Chief (Schreiber), more the building blocks of that relationship that we haven't seen before. So, that was new for me. Also, because we get to know the Master Chief in a different sort of way, in this show a little more intimately, I get to experience the same experiences he's having, which is different for my character, and that was a lot of fun. It was a little more intimate.”

Watch our interview below and catch new episodes of Halo Thursdays on Paramount Plus.