Exclusive: Michael James Shaw on Mercer Opening Up to Princess

This week, on an all-new episode of The Walking Dead, we saw Mercer reflect on what he did, killing two Commonwealth soldiers and covering it up. According to Michael James Shaw who plays the character, in the moment, Mercer felt that was his only choice. “I think from from the moment where he finds out in the house safe room that Sebastian (Teo Rapp-Olsson) has been behind the whole thing, he's pretty upset and a little shaken that it all transpired under his nose,” Shaw told SciFi Vision during an exclusive interview. “It's the only action that I think he feels he has the power to take in that moment, because you can't take out the root of the problem. The only way to eliminate the cancer is to take out the soldiers that were involved.

“…[Y]ou see him act. You see him react, as opposed to making a calculated move. He just he reacts. When he hears that they sent forty other civilians and Commonwealth soldiers into this house to get money, I think that's baffling to him, that they would have that kind of disregard for these Commonwealth lives.” 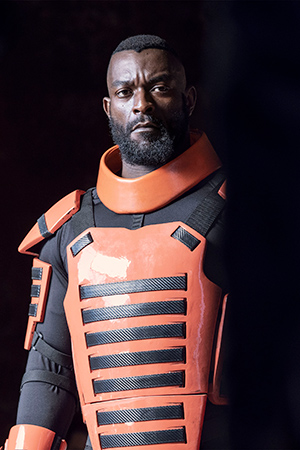 During the episode, having gotten much closer to Princess (Paola Lázaro), Mercer confides in her. “In order for their relationship to evolve,” said Shaw, “I think he has to start breaking down some walls and be open with her about the good, the bad, and the ugly.”

Shaw had nothing but good things to say about working with Lázaro. “She's a wonderful actress, but also just a beautiful human being,” said the actor.

For more from Shaw, including the difficulties in filming while wearing Commonwealth armor and much more, read the full transcript below and don’t forget to check out our exclusive with Paola Lázaro.


SCIFI VISION:  In this episode, Mercer talks about how he crossed the line when he killed the two soldiers. Can you talk about sort of what it was you think that pushed him to that? Or was it sort of a combination of everything?

I think from from the moment where he finds out in the house safe room that Sebastian has been behind the whole thing, he's pretty upset and a little shaken that it all transpired under his nose. It's the only action that I think he feels he has the power to take in that moment, because you can't take out the root of the problem. The only way to eliminate the cancer is to take out the soldiers that were involved.

Okay, and this is sort of a two part question, but in order to, I guess, uphold his own moral ideals, how far do you think he is willing to go? And then on the flip side, how far is he willing to go for the Commonwealth? I mean, maybe before he didn't know everything that was going on, but he has an idea now, and he's obviously still working for them.

I think there's a separation between the Commonwealth people and the society that they built. And then there's desertion, which he's seeing clear evidence of, and I think he, in his deep down heart of hearts, is working to eliminate the cancer, not destroy the Commonwealth. I think he loves the Commonwealth and the opportunity that it has given people to live a normal life. I think he stands behind that wholeheartedly. But in this moment, you see him act. You see him react, as opposed to making a calculated move. He just he reacts. When he hears that they sent forty other civilians and Commonwealth soldiers into this house to get money, I think that's baffling to him, that they would have that kind of disregard for these Commonwealth lives.

Do you think right now where he's at that he hypothetically would be willing to destroy the Commonwealth if he had to, if it meant protecting what he thinks is important? Or is he not quite at that point yet?

...Well, like I said before, where in the Apocalypse have you seen a society where people can go about day to day life, you know, maybe have leisure time, have time to like actually spend time with their kids and not think about the dead encroaching upon their stasis? I think that's worth fighting for. I think anyone who could experience what the Commonwealth has to offer would think that it's worth fighting for.

What do you think it is about princess that makes him feel that he can trust her and open up and tell the truth of what happened? 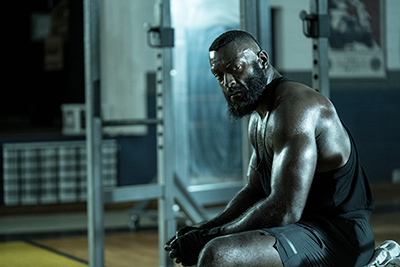 Well, he's drawn to her freedom of expression, and I think that's something that he is kind of admiring in her. In order for their relationship to evolve, I think he has to start breaking down some walls and be open with her about the good, the bad, and the ugly. She can obviously see that something's bothering him, but the old Mercer being who he is, and the person that he has to represent at the Commonwealth a lot of times, I don't think before would have opened up about anything personal that was bothering him to anyone, even his sister. I think him going through that, going through what he goes through in [episode] fifteen, he realizes that in order for this to continue to flourish, which is something that he probably hasn't had in this in this society, he has to let her in and show the darkness.

That makes sense. Can you talk about working with Paola?

Such a joy. I mean, she's a wonderful actress, but also just a beautiful human being, so easy to trust and allow things to happen. You kind of step into the room and look into those other person's eyes and just let it go, you know, the joy, the pain, all of it. It's all there and easily accessible when you're working with such a wonderful human being.

Yeah, you two seem like you get along well. So, can you talk a bit about wearing the soldier armor? It doesn't look very comfortable. Is it hard to move around in them and do the action type stuff?

It's an art. [laughs] Actually, funny enough, moving around, pedestrian stuff, like just kind of walking at a leisure pace or sitting down, is terrible. It's super awkward. But the minute you kind of put a little force behind it, like do an action scenes in the costume, like the walker kills in twelve were super fun and actually easy to move through. I think it's strangely built to move with purpose, as opposed to relaxing. [laughs]

What do you find the most challenging from the show overall, other other than moving in the suit? It can be a scene or in general.

I mean, the Georgia heat was a strong variable. In or out of the suit, I mean, that was a huge challenge. It's a different type of heat, and I'm from Florida, but, yeah, the humidity out here is a little different.

Is there anything that you either were given or took from the set to remember the show by?

I can't tell you that, because they’re going to hunt me down. [laughs]

[laughs] All right. How about this? How aware were you of the show before you started working on it? Had you watched it, and had you known about the comic books?

I wasn't aware of the comic books, but I have watched the show. I had binged it like maybe four or five summers prior to auditioning, on Netflix, and had kind of looped my mom into watching it with me. Yes, I was aware of the show, and I [was] not super fan, but I love watching Rick discover the apocalypse. [laughs] I just thought there was something so alluring in those first few seasons. I probably had binged up to season five prior to auditioning and then finished the rest after. 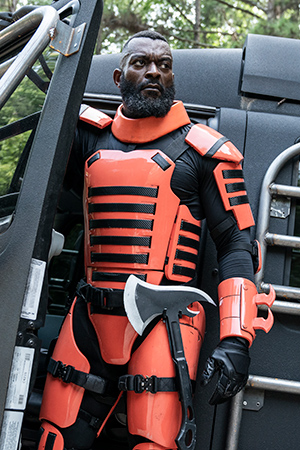 Who's somebody you would have liked to have had more scenes with?

Now, I've been asking everybody this the silly question, but if there was a real zombie apocalypse, how do you think that you would do? And who would you take with you?

...Okay, so if it were the real zombie apocalypse - depending on where I was in the world, I would have taken my dad with me and would have hopped on a boat and went to some island off the coast of Florida and holed out over there and built like a barrier and just kind of sequestered off from the rest of the continental US. Definitely me and my dad.

Is there anything that you can tease that's coming up without spoiling anything?

Anything that I can tease? No, I can't tease anything. I will say things get juicy real quick in 11C.

Do you have a dream role? Something that you still would love to get to do after this?

Oh, a dream role after this. If I could, it'd be cool to step into the role of Bishop if they were doing an X-Men recast or something. That'd be a cool role to play with.

Is there somebody you want to work with, off the top of your head?

Ah, you come with like the deep questions. I would love to work with Guillermo del Toro at some point in my life. I think he's fantastic, and his creativity is out of this world.
Twitter
BotonSocial por: SocialEmpresa
Category: Interviews