Yesterday, Prime Video released the first season of the successful BBC series from creators Stephen Merchant and Elgin James, The Outlaws. The series, which has already been renewed for season two, is a comedy thriller about a group of seven strangers, who after breaking the law, agree to complete community service in leu of jail time. The unlikely group, who are all from different backgrounds and would have otherwise likely never met, are forced to work together to renovate a community center, and in doing so find that they may have more in common than they realize.

The idea for the series started from memories Merchant had growing up, with his parents being involved in community service looking after criminals. “They would tell me about the sort of people that came through the doors, and it was such an unlikely mix of people,” Merchant told SciFi Vision during a recent roundtable. “In fact, one of them was a kid I went to school with, Dave, who was the world's laziest thief. He one time got caught stealing a TV from someone's house, and the homeowners came back, and they went, ‘Dave, what are you doing?’ And he went, ‘I’m not Dave.’ And they went, ‘Yeah, you are; you live next door.’ He couldn't even go a block over. He literally was stealing from his next-door neighbors. There was Dave and there were other people that would come through the doors, and my parents were talking about these people. It just seemed like a recipe for a drama or a comedy, because you had such unlikely groups forced to work together; sparks could fly. It always seemed like an interesting backdrop. So, I didn't really have more than that. So, I went [and] met up with Elgin, and we kind of started brainstorming.” 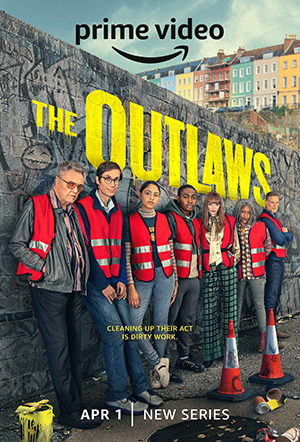 One of the most memorable scenes in the series comes when Christopher Walken, who plays Frank Sheldon, paints over a Banksy piece of art as part of the graffiti on the community center they are cleaning up. According to Merchant, that was actually a real piece of street art from the artist. “The show is is set in Bristol in my hometown in England…No one knows entirely if [Banksy]’s from Bristol, but certainly his graffiti art starts to appear there initially,” the creator explained to SciFi Vision. “So, because the characters are renovating a building, which is covered in graffiti…it just seemed like a funny idea. What if there was a Banksy that was unearthed by these characters, but they didn't recognize it as a Banksy, and they painted over it, and this million-dollar piece was just destroyed by them unwittingly? That seemed like a fun idea.”

Merchant continued that they were able to get in touch with him and the idea of his piece only existing in the show until it was destroyed by Walken appealed to him. “All we got back was, ‘I'm going to come one night, and you won't know when, and if I find the time, I'll do it.’

“So, one morning, we came in early, and there was this Banksy that wasn't there the night before. None of us saw him. We don't know when he arrived, but there it was. We covered it up. We kept it hidden from the cast and crew for about six weeks.

“Then, the morning of, I went to Chris Walker and said, ‘Hey, how do you feel about destroying a Banksy?’ And he was like, ‘Well, whatever you need.’ So, we had one shot to kind of get it right…and it all worked out perfectly.”

Besides Sheldon, the series has an ensemble of interesting characters who are all very different. James talked to the press about how part of that comes from how he and Merchant themselves are very different, yet similar. “[W]e ourselves look very different,” said James. “We come from different places. We have different backgrounds, but we have actually so much in common.”

Merchant added that the characters with their differences start divided but come together, which made it relevant to the world today. “We liked the idea of a show that had these groups of people that on the surface would clash, and could they find common ground?”

Merchant continued to explain how it’s really about how people have more in common than they may think. “It's a show about…how we're all one step away, one bad decision away, from a whole different life experience,” said Merchant. “[Y]ou can take a character, like the man who perceives himself to be the sort of upstanding law-abiding citizen, and through some bad choices finds himself in trouble with the law, and his life beginning to unravel. What we were hoping to capture was that feeling that there's a very polarized world that we live in now, but that actually we're all one step away from an alternate life, that we actually have more in common than we perhaps have that divides us, and hopefully, there's an optimism to the show and, and a hope, and a sort of empathy for all of these people, and that we can maybe make you feel or care or empathize with even people that you wouldn't particularly like if you met them in real life. I think trying to develop a show that's about empathy and about humanity and common ground and also have some jokes and some thrills, I like to think that that's quite an optimistic utopian idea to put into a show.”

Be sure to watch season one of The Outlaws, now available on Prime Video.
Twitter
BotonSocial por: SocialEmpresa
Category: Interviews