The Expanse returned last Friday for its sixth and final season, picking up right where it left off.  Marco Inaros (Keon Alexander, Tyrant) and his Free Navy are still at war with Earth and Mars, with most of the characters lined up against him. After betraying Marco, Camina Drummer (Cara Gee, Strange Empire) and her crew are on the run, while James Holden (Steven Strait) and the crew of the Rocinante remain free agents working with UN Secretary General Chrisjen Avasarala (Shohreh Aghdashloo).

The Expanse is a space saga, but it’s also about finding your family, and if episode 6.01 (”Strange Dogs”) is any indication, it looks like this season is going to stretch its families to the limit. The gang on the Rocinante are still grieving Alex (Cas Anvar)’s death last season, and they’re not all thrilled to have Clarissa, aka Peaches (Nadine Nicole), aboard. Drummer’s people on the Tynan are also reeling from their losses, and as captain, she is going to have to make some tough decisions to save the people she loves. Marco, meanwhile, is having trouble with his own family – namely his son, Filip (Jasai Chase Owens). Still a target of Marco’s cruelty and manipulation, Filip is using alcohol, sex, and bravado to quiet his inner conflict, with limited success. 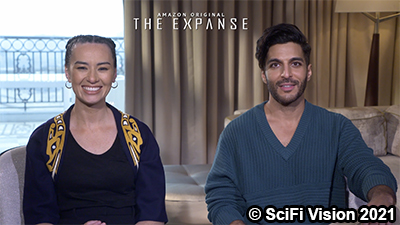 Prior to the season premiere, in an exclusive interview, SciFi Vision asked actors Cara Gee and Keon Alexander about their characters’ divergent ideas about what it means to be in a family.

“Family was not really on [Drummer]’s radar at all,” said Gee, “until, of course, she ends up with a whole polyamorous family. So to go from nothing and no one to a whole crew, it required, I think, a great deal of courage on her part to let herself be vulnerable and open to that love…When we meet her in season six, she's an outlaw, basically, being hunted by Marco and the family that she has left. She feels very, very, very protective of their health and safety.”

Alexander feels that Marco’s toxic relationships are a result of his narcissism and past trauma. “[His] familial dynamics really reveal how mental health and trauma come into play in every family,” Alexander explained, “and even though his intention may also be the liberation of his people, the level of control that he wields and needs in order to feel all right, means that the members of his family are pawns to him and are only valuable to the degree that they are actually carrying out his plan.”

Alexander spoke at length about Marco’s mental health and whether he truly loves Filip, and Gee touched on Drummer’s actions in episode 6.01. Watch the interview below and catch new episodes of The Expanse Fridays on Prime.