Released today by Magnolia Pictures, in theaters and on Demand, Karen Cinorre’s fantasy film Mayday follows Ana, played by Grace Van Patten, who suddenly finds herself in a new and dangerous place on the coast where women are in a war with men, who they lure to their death with radio signals.

Van Patten recently spoke to Jamie Ruby of SciFi Vision in an exclusive interview about the film, including what drew her to the role, what she found challenging, how she connected to the character, and more.

She told the site that when choosing characters, she looks for depth. “I do find it's getting better, but that's hard to come by with female roles, and when I see that there's depth or layers or complexity to any character, I'm so intrigued, because when [I] see that there's opportunity beyond the page, that excites me a lot.”

The actress loved the script. “I read the script and instantly was so drawn into it and transported, and [it's] not very often I read a script and I just want to read it again. I reread it, and I found that every time I read it, I found something new: a new meaning, a new little gem. And I thought it was so magical, every part of it: how it explored sisterhood and connection and grief and empowerment. I was instantly hooked, and I met Karen, and she's such a visionary and had such a specific eye for what she wanted, and I just I knew I had to be a part.” 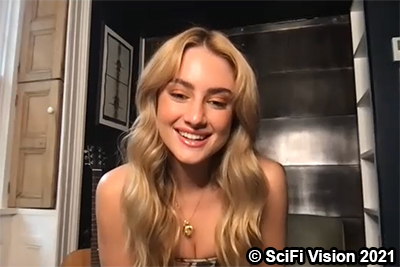 Van Patten related to her character’s connections and that sisterhood. “I did connect with her need to connect, if that makes any sense. I feel like when we meet her, she is in this rut and has this desperate need to find hope. In order to do that, she needs to connect and connect with people she cares about and that care about her. That's why, ultimately, I fell in love with the story, because it's a story about sisterhood, and how, really those friendships and relationships can get you through any hard time. I connect with that very deeply, because I'm very close with my sisters, and my girlfriends. That is so powerful to me, and you can really find strength in that. So, I really connected on that level with Ana.”

She also talked about growing the connection with her female costars. “We shot right before COVID in 2019 and we didn't leave each other sides. We were all in the same hotel in Croatia, and we’re still all very close, and I love them all so much.”

The actress already knew costar Mia Goth when she took on the role. “Mia is the best. She's so unbelievably talented and committed and generous, and we were friends before we did the movie together, so we were so excited to dive into this and explore this world together.”

Be sure to watch the full interview in the video below, and check out Van Patten in the bold, new film Mayday, out now.