The series La Brea, which is filmed in Melbourne, Australia, starts with a massive sinkhole opening up in the middle of Los Angeles, and everything around it starts being pulled inside, including people. Families are torn apart by the disaster, but somehow, those who fall inside find themselves alive in a dangerous and primeval land where they must work together to navigate their dangerous new home.

The cast talked to SciFi Vision about what attracted them to the roles. Zea was happy to get a part where her character is not dependent on her male counterpart. “I'm usually a wife or an ex‑wife, and that story favors pretty primarily in a lot of the work I do. What was great about this was even though I am an ex‑wife and a mom, my identity isn't surrounded by that. I get to have a full story that has to do with how I'm sort of navigating this world as opposed to what my relationship is with my significant other. Even in 2021, it's rather fresh especially for me. So, I was really excited to explore being able to play something that was sort of independent of my SO.” 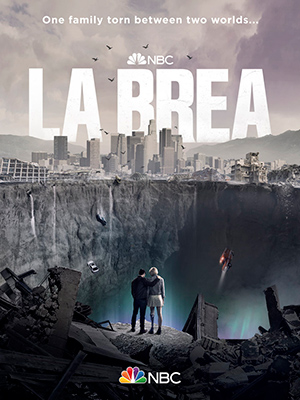 Macken said what he found interesting in the show was the human relationships. “They've all got to go through this really difficult process where you're kind of thrown into a situation that is almost unfathomable and then have to try and either find your family or try and solve your own personal issues…Myself and Zyra, we're trying to figure out if the rest of our family are alive or dead and then trying to get to them…It's a very interesting process from trying to figure out how people would cope with that situation, but I think that's what's fascinating from a character point.”

Martin agreed and said that his character is at a pivotal point in his life, heading off to college, and a setting like the show really shows who people are. “We get to see him go through that process of maturation in an environment that's really real and raw, and [it] really exposes true character traits, and I think that's really exciting.”

Gorecki told the site that she likes that her character is a regular kid. “I really enjoyed that even though she's an amputee, it was less about that and more about her as a person and how she goes from being just a regular kid with regular kid issues to having to become a hero and having to work with her dad to save her whole family and save everyone.”

Okonkwo liked that the show is a melting pot of people. “There're all sorts of people who are driving from, you know, Wilshire Boulevard that morning. So, for the people who end up in the hole, it's just a real cross section. There're obviously Americans. There's a Brit. There're Australians. There's a whole cross section of society, and [we’re] throwing those people together in this primeval world and seeing how they survive, how they relate to one another. Do they devolve or do they rise to the challenge and really support and help each other? That was a real core of the human journey on this show that I was really excited about and that really, I think, all of us enjoyed being a part of it, because it's really heightened. It's a really stressful situation, but I think for each character on the show who are in the hole, and certainly for Eoin and Zyra who are above it, we all go on this great, incredible journey through the course of this season. So, yeah, I'm really excited for everyone to come along for the ride.”

Seda told SciFi Vision that he enjoyed the layers of his character. “What attracted me - I mean, former Navy Seal, doctor, father, husband, action, adventure, sign me up. There're so many colors, and there're so many interesting layers that exist within this character that I'm still kind of finding as we go along. That really is attractive. As an actor, that's like, wow, a lot of stuff to work with.”

Appelbaum explained to the press that the idea for the series started with the image of a sinkhole opening up in the middle of Los Angeles and grew from there. “It was just an image that I couldn't shake, and I had never seen a show open that way with something so dramatic. I knew I wanted that to start the story, but didn't know anything else, but I started asking so many questions about why does the sinkhole open?  Where does it go?  Who are the people that fall in? Then, once you’re starting with those questions, you start to create a world of characters in situations. Then, from there, a thousand other things happen, but it really just started with an image.”

The showrunner, however, said that the heart of the show is in the emotional connections. “The main selling point was there's certainly this spectacle of people surviving in a strange and primeval land that has scope and scale, but, really, what's at the heart of it all is this family that is torn apart by this sinkhole. That emotional connection to the show, I think, is what people responded to the most.

“A lot of shows, there can be lots of ideas that are big and noisy, but I think without that deep, emotional connection at the heart of it, people wouldn't have responded to it. I think that's something that we try to keep at the heart of the all the episodes is this emotional story we're telling about this family, but also the emotional story of all the survivors who are down in the sinkhole as they're trying to figure out how to get home and also how to survive in this place.”

The elements also relate to some of what’s going on in the world today, according to Appelbaum. “One of the really important parts of the show is that even though it's in the sci‑fi genre and there's an escapist element is that we are relating the themes of the show to what's happening in the real world. A lot of the show is about this group of survivors who are down in this strange land, about how they come together, or don't, in order to survive. So, I think the problems that they have in the real world come with them. So, even though we are operating in a made‑up world, we do want it to feel real and relatable to what people are going through on a daily basis.”

The producer also talked about balancing the serialized elements of the series and later payoffs and how having extra time from the pandemic actually was a positive in that respect. “I think with a show like this that’s serialized in the genre, it's really incumbent upon the writers and creators to think ahead and to plan, because what you're doing in Episode 1 is hopefully setting up something that you're going to see in a later episode. One of the real benefits that this show had was a really long gestation and development process.

“I pitched the show to NBC over two years ago, and since that time, we started shooting a pilot, and we were shut down by the pandemic. We opened up a writers’ room, and Steven and Bryan and all these other great writers came on board. So, we've really had a lot of time to really think about where we're going, which is really exciting and, I think, helps ground everything from the beginning, having a sense of, 'Oh, this is where we're going to be taking it.' "
Appelbaum told the press that the time period that a lot of the show takes place will be revealed early on to viewers but will bring more questions. “It's something that we're going to discover in early episodes of the show. So, if the audience is into the show, they're going to get an answer, but what that answer brings up is only more mysteries and more questions. I think it's going to be an exciting reveal and something that's going to leave the audience wanting to understand more about this place and how it all came to be.”

The series has a good bit of special effects, but a lot of it is actually practical rather than digital, according to Martin, “I would say that while we do do some green screen stuff, [but] I think you'd be blown away to see how much of what we do is real. We have these magnificent, giant sets that are practical, that we put together, and we have these setups where you look around, and I swear to God, sometimes I open my eyes and I think I'm actually in a sinkhole because of what we've constructed there. It makes the job a little easier, actually.”

Be sure to check out the premiere of the new series, tonight on NBC.
Twitter
BotonSocial por: SocialEmpresa
Category: Interviews