Tomorrow Syfy airs the season finale of its new drama, SurrealEstate. In the last episode, August Ripley, played by Maurice Dean Wint, entered the Donovan House and texted Luke (Tim Rozon) that they were wrong about the doorway in the cellar. It’s not a way out, but rather a way in. He also said he was scared, which is very unlike him. Luke went to check on his friend and coworker, but he was thrown from the house by an unseen entity.

Earlier in the season, Wint talked to Jamie Ruby of SciFi Vision in an exclusive interview where he teased what’s to come for his character for the finale, talked about some of the challenges he faced this season, and more.

Be sure to read part one of the interview from earlier in the season. 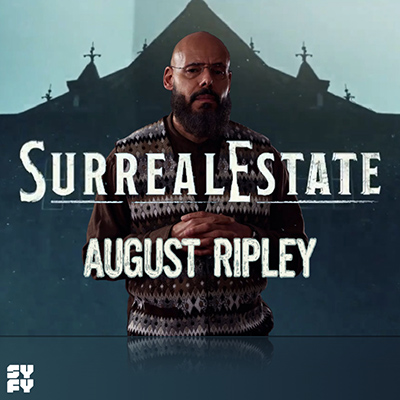 MAURICE DEAN WINT:   I have to say that the production did such an amazing job of selecting actors/ individuals who are so perfect for their roles that I would be hard pressed to claim that I was more like any of the other characters. I honestly have become so spoiled watching my wonderfully talented castmates bring elements of themselves to their roles. I can see none of myself in any of their characters. I think August is a no brainer for me. Yes, there are parts of the character that I wish I was more like, but the reserved nature, the analytical angle, and the love of words of wisdom and sage advice from literary giants is very much up my alley. I just am nowhere near as encyclopedic as Augie! I would love to retain and be able to apply the writings of great thinkers, poets, philosophers, playwrights, in everyday life situations with as much specificity and relevance as he does.

What did you find the most challenging?

I think it was working with Adam Korson (Father Phil). We have a lot of stuff together and he loves his comedy. He’s a natural born scene stealer and he always likes to have the last word in a scene, so I have to always keep an eye on him to make sure he’s not getting up to any mischief when my back is turned!

No, Adam is terrific. He has a well-honed sense of comic timing and a magnetic charisma that is a real treat. I loved working with him.

I suppose if I were to say there was anything challenging about this shoot, it was the block shooting, and there was a fair bit of it over the four-month schedule. You really have to keep on top of your character’s journey and state of mind from one story to the next as you flip back and forward from one episode to the other. But there was always lots of help from our directors, script continuity, wardrobe, and props et cetera, and in the end, it was a tremendously effective and efficient way of shooting.

I’ve been asked whether August’s technical jargon or use of colorful or flowery quotes from great writers-in-time was difficult to manage, and I have to say, “No.” George Olson managed to create such a realistic and dimensional and articulate man in August that it made such perfect sense that he is a voice of wisdom, sometimes his own and sometimes as a conduit through which the wise and profound thoughts and musings of great literary minds pass through. Having this material written for me actually made me constantly eager to read the books and seek out information on the authors quoted. While I was on location in Newfoundland, I ordered a few books on Amazon based on Augie’s quotes from certain episodes, stuff from Aleister Crowley, Edgar Allan Poe, Pearl S Buck, Albert Camus, and just researched others out of interest. It was a special little gift that I treated myself to.

What was your favorite scene this season?

You are asking some rather difficult questions here, because I have had such incredibly memorable moments with each of my fellow castmates individually and as a group. I must say I had a lot of fun doing a particular scene which opens the episode directed magnificently by Melanie Scrofano…I will say that it is a really crazy, adventurous scene with Adam and I and an ‘unwelcome occupant’ of a house that we are processing. It was quite a physical scene and there is a fantastic sense of humor intertwined with danger. I think the audience is going to be mesmerized by the cinematography and visual effects in the scene.

I really enjoyed doing the attic scene with Sarah Levy and the raven in episode two, and the group scenes where Sarah’s character is first introduced are also memorable. It speaks to the unbelievable group chemistry that just clicked from day one. We all just instantly liked each other - and Adam. No, just kidding. I love to give him a little ribbing, because he is a bit of a jokester. Actually, we give each other the gears every now and again because there is this overwhelming desire not to take ourselves too seriously and the deep respect and confidence necessary to be able to play and clown around a bit.

I must mention that there is also a really beautiful scene with Savannah [Basley] later in the season that I think will be quite impactful and heartwarming for our fans.

And Tim - I don’t even know where to begin with this extraordinary gentleman.

Can you talk about working with Tim?

I have had a handful of amazing, truly grounded and powerful individual scenes with Tim. Our workshop scenes in the first part of the season have been so effortless and in-sync that it almost felt as if we had been working together for much longer than just a few weeks. You know, before working on this project with Tim, I met him on another series that I recur on called Diggstown, which just shoots in the province next door, Nova Scotia. I have been on it for three seasons now, and Tim appeared in the very first season. He wasn’t able to return for the next two because of other commitments. I didn’t have any scenes with his character in that show, but I chatted with him a little bit over lunch one or two times, and I thought he had a wonderful charm and genuine bearing about him. That only become more and more true as I got to know him on SurrealEstate.

He brings both a surge of electricity to group through his desire to make the set a fun place and a solidity. He is a magnetic and focused leading man. He really does have the bearing of prince. Luke is our bossman and he leads with care and compassion, all the while keeping the ship firmly on course. All of us knew with certainty that Tim, as an actor and as a person, was unequivocally, hands down the best choice for this job.

We both have a bit of passion for the game of chess as well. We talked up a good game on set during downtime, but we never actually managed to get in any matches. So, Season Two has to happen, because [we] have to see what stories will be told on the checkered squares between Luke and Augie!

Describe your character in 3 words. 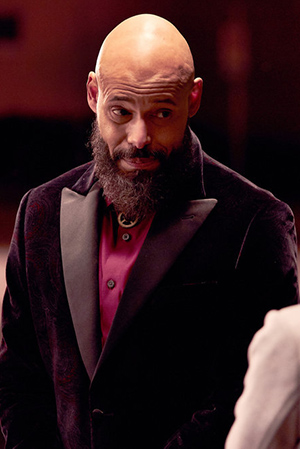 Lastly, In the last episode, August went in the Donovan House and it seems like something happened. Can you tease what’s coming for him in the finale?

From the very beginning of this season of SurrealEstate, the Donovan House has been a property unresolved, a restless specter. We have watched August stare down the shadowy frames and columns of different structures episode to episode with a meticulous resolve. But it has to be asked, because we suspect it, “Is there trepidation?” What is a bridge too far for a man whose next step is almost always determined by the calculated total of all the steps that came before? When will pure instinct or intuition suffice? A curious mind lacking appropriate light to guide it may fall into cellars unknown.

[The episode] is somewhat of a departure for August Ripley. Yes, it may be in keeping with his usual witty banter and one-line gems, but in this instance, it rings with an abandon that is uncharacteristic for Mr. Ripley. There is a tentative amusement of sorts as he stands on the threshold of the unknown, on the doorstep of Donovan House. We have seen him in this situation before. If you remember, in Episode six, he stood on the porch of a house and a mysterious force “seemed to invite him inside.” He did not go in then, but now he willl? What compels him to cross this threshold? And what will it cost him? Without being a spoiler, I will suggest that the stakes of resolving the mystery of this one particular house may have profound consequences for not only him, but for the entire team.

Is August lost to Donovan House? Devoured by whatever it was that drove Megan (Tennille Read) out? We fear for him. The team will fear for him. What price will he have to pay for the risk he takes, and ultimately, what will it reveal about him that up until now has remained a mystery to our committed SurrealEstate followers?

Will this be ‘the last dance?’ This question and all of the above awaits one week hence.