Recently Netflix finally released season six of its hit series, Lucifer. Originally the show was only going to be five seasons, but the cast and crew got another set of episodes to say goodbye.

The sixth season picks up with Lucifer (Tom Ellis) slated to become God, but as always on the series, things never go to according to plan.

Earlier in the season, showrunner Ildy Modrovich talked to Jamie Ruby in an exclusive interview for SciFi Vision about the finale season. She discussed how certain parts of the final season came about, why they wrapped up the story the way they did with Rory (Brianna Hildebrand), if Trixie (Scarlett Estevez) knew the truth, whether they’d be up to come back again in the future, and more.

Also please be sure to read part one of the interview, which is spoiler-free. 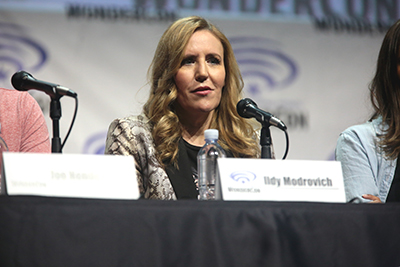 Do you have a favorite scene this season

Oh, my gosh, this season - I do love the scene at the piano in the final episode. I think, again, it was a very emotional scene, and I think after about the second take, it hit both of them that they were really saying goodbye to each other, the actors, and the tears just became so real. I mean, they're both such tremendous actors, obviously, but it just had that extra level of like, “Oh, my God,” and we were all sort of saying goodbye to the show.

And it also involved the entire crew, because we kind of ran out of money, and we had to do that change from the piano to hell practically. So, the crew sort of swooped in, and it was like a play…The camera was over the top of the piano, and as the cameramen came around, they swooped that out, and then more crew brought in the throne and a green screen. It was this ballet, and it was so indicative of our show in that we were all kind of working together and all having fun and laughing about it and applauding afterwards when it worked. It was a team effort. So, probably that, yeah.

So, this is kind of a silly question, but I just keep wondering every time I watch these. Is it you or Joe [Henderson] that is the huge Bones fan that keeps referencing it in the show? [laughs]

[laughs] You know, it's Jason Ning. Credit goes to Jason Ning, who is a writer who was with us from season one to five. He just wasn't there the last season, but that was kind of owed to Jason, so we brought it back in season six.

After doing the show for so long, what was something that you still found challenging this last season?

Oh, gosh, I don't know if anything really was. I mean, the time travel did break my head. I think time travel is super tricky. That wasn't something specific to our show all the time, but I did wrestle with that, and every time we started talking about it would be like, you know, a mechanic talking about your car. You're like, “What? You need to do what? What's broken? Okay, I trust you,” you know, or talking to a doctor about something. I don't know. You know, I'm just not a time travel kind of gal. That's the only thing I can think of.

When did the conversation start to have a time travel element? Because, obviously, you could have had something with, you know, having a kid, but maybe having a baby, or I don't know, something. So, how did that whole conversation come about?

Yeah, well, when we first realized we wanted to flip the script a bit on Lucifer and explore what it would be like for him to be the father, for him to be the one that did the abandoning, we realized, “Okay, let's have a kid.” Then, we also thought, “Well, it's much more fun…[and] way more juicy and emotional if it's Lucifer and Chloe (Lauren German)'s kid. So, how do you do that? How do you manage that? Then, you know, babies just aren't that interesting. They're not that great. They're not good conversationalists for the most part. So, we knew, again, if we wanted to really get the most drama out of it, it would be an adult. And thankfully this wacky show of ours, we can make up things like [that]; we can do things like time travel. And when we realized Rory would be half angel, that meant she [could] technically have the ability to self-actualize something, and it came together after that.

I want to talk about is this season Ella finally figures out the truth about Lucifer, but we never find out anything about Trixie, but we do see her drawing more than once with the horns. Can we assume that she's kind of intuitive and figured it out?

ILDY MODROVICH:   Well, we've always kind of felt like Trixie somehow just knew, because Lucifer always says it; he's never hid the fact that he's the devil. He always says, you know, “I'm the devil.” He says that to Trixie in that very first episode, “Lucifer.” “Like the devil?” “Exactly.” You know? I think she's just always been like, “all right,” and there's been no discussion about it. There's been no questioning of it, because she was a kid; she was a little kid, but as she grows, I think it's just something [that’s] like I said, a given to her.

All right. So, I'm curious though, thinking about it, I feel like at one point or another, Chloe would say something to her. What do you think that conversation would have gone like if you had gotten to write it?

I don't know if you can tell me, but I'm just curious what was behind the decision to not have Lucifer keep coming back to see Chloe after he went to hell, because that definitely surprised me. Why that ending and not change the future?

Yeah, to be really honest, we went back and forth on that. We realized that if we're talking about time travel, there's a paradoxical element to it. We could get around it, but we felt like the beauty, or the identifiable, emotional thing that we wanted to convey is how you sacrifice as a parent for your kids, and that's a beautiful, bittersweet thing. You keep secrets that might hurt them. You throw yourself on the sword, more than once, and sometimes they know it; sometimes they don't. So, that became kind of the most glaring factor that won us and pushed us toward making that decision, and also, when we found the moment when Rory says, “Don't change me,” in other words, when she accepted that “I wouldn't be who I was, who I am right now, if the past were different.” And I think that's another thing that we can all sympathize with and understand, like, the bad things mold us too. And it's not that she didn't know at that point that her dad loved her, and when it became sort of her choice too, it all felt right, even though it was kind of bittersweet.

Yeah, it will make a lot of people cry, though. [laughs] It sure made me cry, although I was crying a lot through the last few episodes. I actually waited to watch the final episode as long as I could. Even though I watched all the other screeners right away, I tried to wait, because I wanted to stretch them out.

Oh, that makes me happy.

So, did you get to do everything that you wanted to for the ending? Because I feel like everybody got a really good ending, like even Charlie's wings. That cracked me up, especially Amenadiel [D.B. Woodside]'s face when that happened. 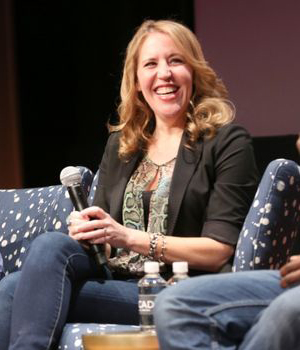 Yeah, you know, we did. I'd say it was between episodes nine and ten we got to say everything we wanted to say. If you just look at ten, it's mostly focused on this nuclear family, that of Lucifer and Rory and Chloe. So, nine is really where we spend a lot of time with all of our other characters and saying goodbye to them and having them say goodbye to Lucifer. I think between those two episodes, hopefully, you felt a catharsis of saying goodbye, like you got to say goodbye properly through those two.

How much harder was it to say goodbye with COVID happening and not kind of getting what you normally would have? I mean, did you guys get to have a wrap party at all? Or if you haven't, are you going to do that?

Oh my gosh, my friend, yeah, it was rough. I'm not gonna lie. You know, here, like I said, we have this show that is all so close to us and important to us, and we're all so close. And yeah, we had to wear all this PPE, and we had to stand six feet apart. We couldn't hug, and you're like, “What?!” You know, you're yelling through your mask and your shield. And it was hot. We couldn't even really take pictures. We weren't really allowed to take pictures of each other with our arms around each other, and I'm a picture whore, so that was hard for me. So, it was tough, and no, we did not have a wrap party, so that was also sad. But, you know, first world problems in that we got to have the show. And we did have a little bit of a spontaneous celebration that very last day of filming. The last scene we actually filmed was the last scene of the show, when Chloe knocks on the door and says, “I thought you could use a partner.” So, that was the final scene that we shot. Then, everybody got individual bottles of champagne, and we did toasts and speeches, and we all got emotional. So, we were able to do that, at least, but no, we didn't get the giant sendoff that I wish we had.

You need to do that.

I have to ask, though. Do you think there's ever a chance that you guys could come back and do like a special or something? Would you come back if they offered the opportunity?

You know, you're not the first ask.

One hundred percent. I mean, how would you not want to stay in a world that made [you] so happy for six years? It was the most fulfilling job I've had in my life and definitely the most fun I've ever had on a show. So, sure, if we got the opportunity to revisit these fabulous characters and this cast, we absolutely would. So, sure. Hello, Netflix, are you listening?