August 18th, Hulu premieres the first three episodes of its new and original limited series, Nine Perfect Strangers. The series, based on the book of the same name by Liane Moriarty, takes places a health-and-wellness resort and tells the story of nine strangers who come for a ten-day retreat, hoping to be healed and transformed but meet the mysterious resort director, Masha (Nicole Kidman), and may get more than they bargained for.

Recently, cast members Melissa McCarthy, Bobby Cannavale, Regina Hall, and Kidman, who also serves as an executive producer on the project, as well as executive producers David E. Kelley, Bruna Papandrea, Per Saari, and Jonathan Levine talked to the media during a panel as part of the TCAs.

Two of the cast members talked to Jamie Ruby of SciFi Vision about what it was like laying in a grave during a scene when the characters were told by Masha to confront their mortality. Cannavale thought that it was a good exercise. “It’s certainly confronting.  I mean, I know just speaking for myself, I think what she tells us to visualize is a pretty unorthodox method.  But I don't know, in thinking about it, it’s pretty effective.  I know for myself, I definitely try to think about all the things that she asks us to think about, and when you're surrounded like that by all that dirt, it’s extremely confronting.

“I will tell you that whenever we cut camera, every single person got out of those holes pretty quickly.  We didn't like, hang out.  Nobody brought me water in the hole.  So, I think as a method, it’s not one I would have thought of and yet, I think it’s pretty confronting.  That's all I can say, yeah.” 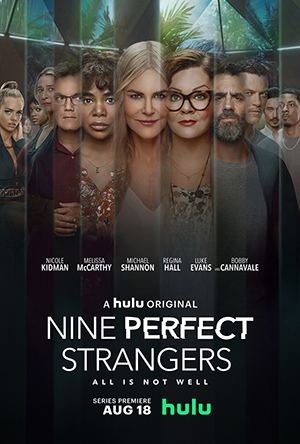 McCarthy admitted that she was terrified of being attacked by bull ants, but also talked about how it makes you think. “Well, I think it makes you think of very big questions - of what will be changed when you're gone?  Who will care?  What have you left behind?  Have you made something better, and I mean, as Nicole asked these questions, and also you ran through some things, it's like it brings up pretty big questions.”

The actors also talked to the press about what their characters’ stories taught them about the pursuit of wellness and what they thought about a specific line about how the characters are already suffering. According to McCarthy, “I think you think a lot about what you do to cover up your problems, and when you mask your problems, and after this last year and a half, masking things doesn’t make them better. At some point, you have to get them out. And I think that line really stuck with me, because it was whatever you’re avoiding, you’re not making it better for sure. So, at some point, you have to get it out, and so it’s like you’re already in the midst of being miserable and suffering, so make a change. And that’s so much what I think this show is about. That line certainly encapsulates it.”

Kidman talked about some of the highlights of filming in Australia. “It was kind of extraordinary to all be shooting there, and the magical quality of the environment I think really helped us.  It was like one of those things where you walk in and you go, ‘Is this real?’

“And then we existed in this dream state for almost six months, and then we left, and it was really kind of weird and magical. I’m a huge believer in using what you have to penetrate the show and the performance, and we were just given that.  We were given that because of the pandemic…and we all just arrived from all different countries, all different sort of quarantine places, and we arrived and suddenly bonded and had to do this show together for [around] six months.”

McCarthy and Cannavale were asked about what makes a good rom-com couple. They joked around about disliking each other, and McCarthy said that it is their fourth project together and they seem to either beat each other up or fall in love. She praised her costar, “For me, I know it’s Bobby. Bobby is so funny, and he’s such a skilled…[and] amazing actor.  He’s so present, and you never quite know which way he’s going to go with it…It’s really great, and when you have that kind of comfort level with somebody, I think you’re not afraid to be embarrassed or feel dumb. It’s like you just go with it.”

Cannavale felt the same way. “It’s really serendipitous.  I mean, from the moment we met, I think we just - I don’t know - you can’t really put your finger on what it is.  I do know that Melissa is really well-prepared. I try to do so much work before I come to work. We don’t do a lot of talking about it. We’re just there together, and we usually get through a couple of takes pretty easily, and then we have fun and usually have the time to be able to have a couple of takes for ourselves. I mean, most of the time it just feels effortless, and I think that’s a testament to the kind of preparation that Melissa has and her work ethic and the depth of her well, really. There’s just so much going on in there, and it’s a thrill to be able to get to work with somebody like that.”

Kidman added that their kiss under the tree was the “best kiss on TV this year.”

Executive Producer Jonathan Levine talked about how there are some horror elements to the series and crossing genres. “I think it really transcends genre.  I mean I certainly thought about horror and certainly thought about thrillers, but at the end of the day, even though we’re playing with those tropes, I think, for me, it was about characters and about these beautiful people that you kind of empathize with and fall in love with. But we certainly were playing with the audience's expectations and using genre as sort of a vehicle to tell this story and to keep it compelling.  But for me, at the end of the day, it's about the people.”

Kidman also talked about creating the character of Masha by staying in character throughout the shoot. “I sort of found the accent due to putting together her whole life story and made it a Russian-American mix.  She speaks seven languages, just in case you didn’t know, even though I don't speak seven languages in the show, I do speak seven languages.  And it came slowly, because we had a lot of time to work on it.  Strangely enough, the first time I met everyone except for Manny [Jacinto] and Tiffany [Boone], I walked in as Masha, and I never related to anybody in any other way. I only related to them as Masha and stayed in the character.  And the first scene we shot was the scene where I come in in the room and say, "I am Masha. Welcome to Tranquillum." Then, I was able to stay in that place where it was a very - I wanted a very calm healing energy to emanate all the time.  So, I remember going over to people and sort of putting my hand on their heart or holding their hand. They would talk to me or use my name, Nicole, and I would completely ignore it. I'd only respond to Masha. At the end of the shoot, I think it was Melvin [Gregg] and Samara [Weaving] that came to me and said, ‘We've never heard your real voice or your Australian accent,’ but it was the only way - I was talking to Bobby about it - the only way I could actually relate to people was that way, because I felt like, otherwise, I would be doing a performance, and I didn’t want to feel that way. Then, each person would come and do their scenes with me in my rooms, and each one would have a different - I would create a different space for them.  So, it was a really weird place to exist.  So, now, I'm saying, ‘Hi, Melissa.  Hi, Regina. Hi, Bobby. This is Nicole,’ but that was the way in which I could do the performance.”

Kidman and McCarthy also talked about working in television versus film. According to Kidman, “I mean, for me, this and primarily [for] what I've done on television there's always been a director at the helm, only one director, so it’s been their vision. So, I see it as an extension of film; it’s just a longer version.  I haven't actually done a show where you have different directors coming in and doing different episodes. So, for me, it’s more like that extended cinematic storytelling. At the same time, I started off in Australia doing mini-series, which is the equivalent of limited series. So, I did a couple of small films, but then I went straight into mini-series, which was primarily how I became really well known in Australia. So, I've always embraced it. I just think now it’s such a fantastic landscape, because you have these writers and directors who are willing to work in this territory. And you still can go back to Kieslowski and the Dekalog series. I mean, he did that way before anybody was doing this. Bergman did Scenes from a Marriage, and it was a television; it was a limited series. So, it's not like these extraordinary filmmakers have not ever worked in this territory before, it’s just becoming possible again in a huge way for all of us.

“…And you have to be really rigorous with it, because Jane Campion, who’s a really good friend of mine, she did Top of the Lake, and there was True Detective before we did Big Little Lies.  And I remember going on a walk with Jane, and she was saying, ‘It’s incredibly hard to keep a storyline vibrant and alive through a six or eight-hour episode storytelling.’ People forget that that is an art form in itself. It’s so difficult. You know, when you have ninety minutes or two hours to tell your story, that's very different than trying to keep it compelling and intriguing and hypnotizing over the course of a much longer time span…you have to be incredibly rigorous with it.”

McCarthy thinks that it’s an amazing opportunity when you can play a character for a longer period of time. “You don't have to take everything out. You can really get a long launch pad for a change. You can go from A to Z when you have three years of a show that you couldn't quite compact the same way in a film…It’s just the luxury of having more time to tell that story, and to show real changes is exciting for me.”