Exclusive: John Suits on Directing 3022 - Now in Theaters and Available on Demand and Digital

In the film 3022, starring Omar Epps and Kate Walsh, years into an extended mission aboard a space station orbiting Earth, tensions flare between a group of astronauts. They consider abandoning their mission, when they find that Earth has been destroyed.

Director John Suits (Pandemic, The Scribbler) recently talked to SciFi Vision in an exclusive interview about working on the film. 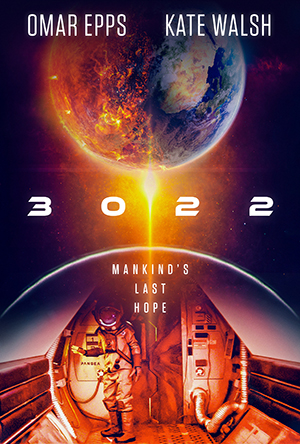 How did you come to work on the film?

I found the script initially on the Black List database around five years ago. At the time, another company had optioned the script before I could and kept the rights for three years. I since have become friends with the writer, Ryan Binaco, and once the rights became available, I was able to convince him to give me a shot at making the movie for a much lower budget.

What was it that most drew you to it?

Beyond being a big fan of Ryan Binaco’s writing, what most drew me to the story was the characters and relationships. It deals with a huge concept in a way that feels intimate, and I found that a fascinating way to tell the story.

How closely did you work with Ryan?

I worked very closely with Ryan from the very start of the process all the way through delivering the film. He was a crucial partner throughout, creatively.

Was there anywhere other than the script you took inspiration from when deciding how you wanted things? Was there maybe another movie you looked to or anything like that?

There definitely were a lot of films we drew inspiration from. Alien and Outland are two of the movies Ryan and I referenced for tone and feel. Will Stone, the cinematographer, David Ebert, the production designer, Tara Craig, the producer, and I worked to give the sets and the look of the film a retro feel inspired by those films.

Was it hard to create an atmosphere when there is essentially only one set for the majority of the film?

Yes, it was a lot of work figuring out how to utilize the sets and lighting to establish a tone. We made the movie for under a million dollars, so we had to be very creative in how we built the sets with the budget constraints. We actually ended up building most of them in the parking lot of the stage we were renting, because we ran out of space on the stage. A good deal of the movie was actually shot outside on that parking lot.

Being on a ship, a lot of it is close quarters, small rooms, corridors, etc. How does that affect the way you set up shots? 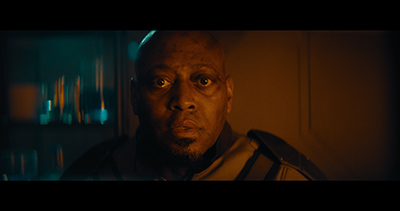 Will Stone and I spent a lot of time discussing how to use the sets to create feelings of isolation and claustrophobia. We also shot almost the entire film on wide angle lenses to create an uneasy feeling that we felt helped the audience be in a similar headspace to the characters.

Were most of the sets practical, or was it a lot of green screen?

In staying with the retro feel, we wanted to do as much practically as we could, so all of the sets were practical other than outside the ship.

Can you talk about the filming process for some of the specific scenes that had visual effects?

It was a big challenge to figure out how to film the space sequences, because we didn’t have the budget to use wires and other devices commonly used for zero gravity. We worked with Van Ayasit, the stunt coordinator, to figure out lo-fi ways to create zero gravity.

Can you talk about working with the cast?

I got so lucky to have such an incredible cast. Omar, Kate, Angus [Macfadyen], Miranda [Cosgrove], Jorja [Fox], Enver [Gjokaj], and Haaz [Sleiman] really brought a lot to every scene, and they were all super cool on set as well.

Was there any feedback that the cast gave that ended up changing things or adding lines, things like that?

Yes, the actors really made the characters their own, and as a result, the final iterations of the characters on screen had evolved a lot from how they were initially conceived on the page. 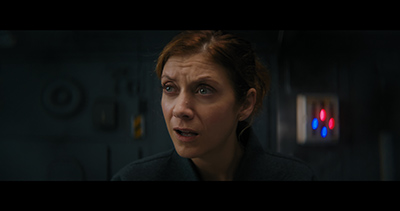 What sets this film apart of others of a similar subject?

I think the budget. [laughs] People thought we were crazy when they heard what we were attempting at the budget level, and I’m really proud of our team for pulling it off.

The film deals with a lot of different themes, and the ending is fairly left open. What is the main thing you hope people take away from it? What does it mean to you?

For me, the film is about hope and how we each confront situations differently when it seems there is no hope. All of the characters are dealing with this existential crisis and have to figure out how to cope. The characters each handle it very differently and have justifiable reasons for their actions.

Going off of how they reacted, which character do you most relate to and why?

I probably most related to Omar and Kate’s characters, because they represent the extremes, and I think I would probably respond to the situation in a way that was somewhere in between them. One represents rationality, and the other hope. Their characters also have interesting journeys where they almost switch places by the end.

What was the hardest scene you directed?

Definitely the scene where Kate and Omar are getting sucked into space.

What was your favorite?

Gosh, it’s really hard to pick. Watching these actors work was really a pleasure. I definitely enjoyed the scenes with a lot of characters, because there were always fun discoveries while filming them. 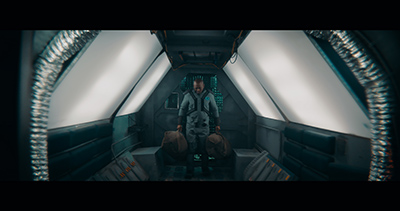 There aren’t any plans currently, but it definitely would be interesting to explore the world further.

Are there any other upcoming projects you have you want to talk about?

3022 is currently available in theaters, on demand, and on digital.