Today The Osiris Child: Science Fiction Volume One, directed by Shane Abbess, comes to theaters, on VOD and Digital HD. After a prison break that leads to a virus threatening everyone on a newly colonize planet, Lt Kane Somerville (Daniel MacPherson) defies his commander and takes off from his station to go down to the planet to save his young daughter (Teagan Croft) before the planet is destroyed.

Down on the planet, Kane runs into prison escapee Sy, played by Kellan Lutz, who agrees to help him save his daughter. It's a race against the clock to complete their mission and get some place safe.

Recently, Lutz talked to SciFi Vision in an exclusive interview about his work on the film.

SCIFI VISION: How did you become involved with the project? What was it that made you want to do it? 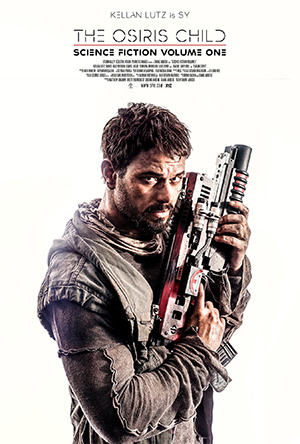 KELLAN LUTZ: I first met Shane Abbess on a project about five years ago, called The 7th Day. I loved the concept of the script. I read so many scripts, and I loved that it was original. There were so many layers to the character to play as well. I talked with Shane and we became friends, but that movie didn't happen, unfortunately.

Then two years ago he calls me and says he has this other movie, and that he wants me to play Sy.


I read it that night and loved it. I loved the emotional levels and the challenge of playing the character going through this journey. The story had so much hopelessness, which was a challenge for me to play, because I'm usually a person with faith and hope. I loved that it was a challenge and something new and fresh.

Other than the script, was there anywhere else you took inspiration for the character?

It was one of the few times I've been able to go method with it and create something outside of myself and live in the character's shoes. I didn't break character. It was a sad and lonely time that I lived with that character, just because of what he deals with.

Most of the movies I do are action movies, which are mostly a version of myself. This one I got to kind of journal and create a backstory of who he was before he lost everything. He was teetering on the edge of taking his life. I had to question why he wanted to go on and make sense of why he is where he is. It would be tough for anyone to go through.

I thought about if I was married and had a daughter; you just don't know what you would do. You wouldn't care about the consequences; you would want revenge. It would be a solemn position to be in, especially just thinking that stuff every day, looking at a photo, knowing they weren't there.

The great thing that Shane did, is he had my wife in the movie - who didn't have any big scenes other than on the table, but he created a date for them. Like he sent us to an amusement park to build authentic memories, so that it became more about losing someone important in the character's life. I loved his approach.

The locations are beautiful. I read that you filmed it in Australia? 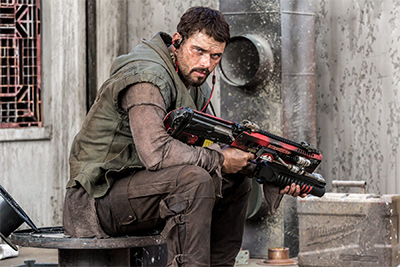 We shot all in and around Sydney and in Coober Pedy. I didn't know about the opal fields. Being able to shoot on an organic location brings life to a film.

I loved shooting there. I have friends there and fond memories. I love vacationing there. It's perfect in the summer time.

Did you do your own stunts in the film? Maybe if you could talk particularly the prison fight; that was a big one.

I love doing as many of my own stunts as I can. We had a great choreographer, and I had a great double, but I did 99% of it.

For the prison scene, Ian Roberts plays Nimal, who I fight. The scene even looked cooler when I actually saw the movie and how they slowed it down with the effects.

Can you talk about the costume design for your character? You really have two completely different looks, when Sy is in the desert and then in prison.

Nicola Dunn did the costumes. She had her own vision for it. It was really cool.

I love that it pays homage to Shane, that all the people pull strings to do a movie and put such passion into the project. I put trust in them. 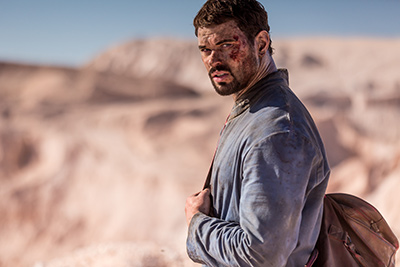 Like even the prison garb had such thought put into it, with the blue color, being from a distant planet and from the future, it had a uniqueness, but it was anchored in reality. And they scuffed everything up. It really helps to develop the character when you put on the costume.

The film had some great special effects, both practical and digital. What was your favorite?

I loved the dog fight with the jet with Daniel MacPherson evading the other figure. There was a contraption they created to eject him out of his seat. On screen the special effects looked awesome, like in the jet fighter. All were top notch and made it look like it was thirty million dollars or something. It looked expensive and really put you on the edge of your seat. It was nice to see what the director's vision looked like after the effects were added.

The movie shows events out of order. How do you think that adds to the film?

I love movies like that, like Momento; it keeps you guessing. That's the way Shane wrote the movie. He combined some of the different chapters to make some of it more linear, but it's really cool to have a different perception in the beginning. You don't know who's the good guy or the bad guy or their motives, until you get to the end.

My character is hiding something, and you don't expect it to be this redemption story with the sadness of what he lost. I love movies that at the end you're like, “On man, I want to rewatch it now that I have knowledge of the journey.” Shane contemplated making it more linear, but it lost its luster. 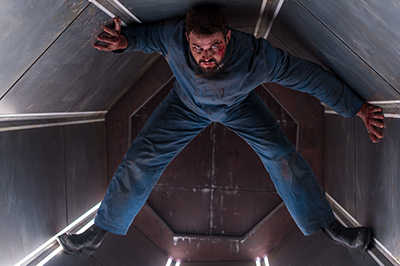 Shane would love to make another one and keep it going. My character is sort of like in the cocoon. He will shed his cocoon and will become a stronger, smarter, unique version of Sy - humanoid, kind of like Dave Bautista in Guardians of the Galaxy. The transformation of terraforming - shedding these things to become a super-powered weapon; a super solider. It would be a different threat. Shane already has it planned out.

Can you describe your character in three words?