St. Louis, Missouri is home to the horror, sci-fi, and popculture convention Contamination for the second year running. The event looks to be a great place to meet some of your favorite celebrities and have a fun-filled weekend, without breaking the bank. The convention will offer a chance to mingle with some stars, play a little zombie laser tag, see a concert, and more. Contamination runs from June 24th - June 26th this year and is being hosted by Dyer Straits Productions.

Contamination organizer Dave Dyer sat down with SciFi Vision in an exclusive interview to talk about the upcoming event and all it has to offer.

Dyer previously worked as a dealer/vendor around the United States before he decided to also start Contamination. "Going to all these shows that I've gone to, there's nothing like [Contamination] in St. Louis. So I came up with the bright idea to try to take it upon myself to try to put this thing together, and it was two years in the making for the first one, and now hopefully every year gets a little easier."

Dyer explained why he chose the name "Contamination." "I came up with that term a couple years ago when I was trying to find a name for a convention that wouldn't pigeonhole us into just one genre, like a horror genre, or science fiction genre. I was actually watching the news one day and the H1N1 swine flu was very prevalently happening and the world...and I just realized that literally overnight that thing had become a popculture phenomenon, especially the term "swine flu," and then zombies were popping up everywhere in books, comic books, they were talking about making the show, there was Zombieland, and so it just popped into my head, "contamination," and I figured that would be a great thing to call it."

This is the second year that Dyer Straits Productions has held the convention. Dyer said that this year the convention will be "bigger, badder, and crazier than last year." He made a point of saying that they are not repeating the same experience as last year. Everything is on a grander scale and they have new celebrities and events. 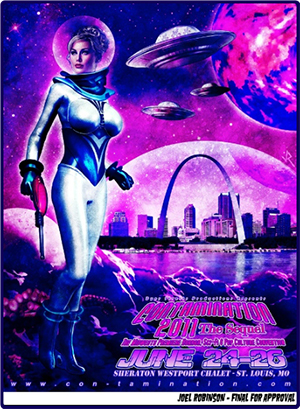 There will of course be a gigantic dealers room with actors, authors, artists, film makers, toy collectors, and other vendors. The dealers room is where you can buy merchandise and of course get autographs and pictures taken with your favorite celebrities. There will be seminars with some of the actors, as well as a film maker's showcase in which they will spotlight five films throughout the weekend.

The celebrities this year include Eric Roberts, who has appeared in many films, such as The Dark Knight and The Expendables, as well as on television in series such as Crash and Heroes.

Also appearing this year will be the stars of Boondock Saints - Sean Patrick Flanery, David Della Rocca, and Norman Reedus (who many will know from the AMC hit The Walking Dead).

For the first time ever there will be a cast reunion with the original Fantasic Four - Alex Hyde-White, Rebecca Staab, Jay Underwood, Michael Baily Smith, Carl Ciarfalio, and Joseph Culp.

Dan Shor, Ram from the original Tron will also be in attendance.

Sandahl Bergman and Ben Davidson from Conan the Barbarian will also be attending.

Another great addition to the guest list is newcomer Cody Deal from Syfy's Almighty Thor, who SciFi Vision interviewed earlier in the week (article coming soon).

There are also quite a few horror actors and actresses attending, including Kane Hodder, "Candy Man" Tony Todd, Brad Loree, and Bill Johnson. The Day of the Dead cast will also be returning, of which includes Gary Klar, Mark Tierno, and for the first time, Terry Alexander.

Other guests attending the event include Mike Holman (MTV's Jackass), Adult Film Legend Seka, Veronica Hart, Maxim model Amber Smith, Kayla Perkins, and Dr. Ivan Cryptosis Curator of the Macabre, who will be the master of ceremonies on Saturday and Sunday.

Also attending are the director of Fragments of Shadow and No Strings 2: Playtime in Hell, Robert Noel Gifford, as well as Max Wasa, who stars in both films, and will be talking with SciFi Vision next week.

There is also a celebrity dinner being held where attendees will get a one-on-one ninety minute dinner with the celebrities in a private setting, however the tickets for this event are sold out.

There are of course many other events at the convention. One unique experience to Contamination is what is listed on the official website as a haunted house, but it's actually something much cooler. According to Dyer, "I was going to put a haunted house in there and you just walk through, "boo," and walk out. Then the guy who came on to do it said "Let's do a zombie lasertag game." Now, it's a zombie kill is what it is. So you go into a room and you got yourself a little lasertag kind of gun, and you go shoot yourself some zombies, and if it gets you, then you're out...[It's] about a twenty minute game and everybody will have a good time doing it."

The convention will also be hosting a drive-in movie of the Fantastic Four on Saturday evening, as well as a concert with Grammy winner G Tom Mac and his band, who wrote "Cry Little Sister" for The Lost Boys movie. There are still tickets for the concert available.

One event that will be returning this year is the Angry Young Men puppet show, which will be presenting a reenactment of Night of the Living Dead.

Another special event is the a live auction for charity. According to Dyer, "We've got some incredible things up for auction and all the money we raise at this live auction will go to the Leukemia Foundation."

Dyer said that eventually they would like to expand Contamination, but it won't be in the near future. "We would love to take Contamination and do another one somewhere else down the road, but right now that would be probably a few years from now, we'll find another area that we might want to take it out there on."

There is however one related event that they do run. "In October we do a thing called the Contamination Halloween Horror Show - it's a one day event, we usually bring some people in, like last year, The Lost Boys came in - [there was] a live concert by G Tom, costume contest, that type of thing. And then we had a big signing with the Lost Boys. So this year we'll still do that some time in October, and then we'll turn around and gear up for 2012 for the next Contamination."

Dyer will also be attending the event as a vendor with his company Funky Monkey Comics and Collectibles.

If you would like to find out more about Contamination, you can do so at their website. You can purchase tickets by using the admissions tab on the site or go to the box office the day of the show. There is also a commercial available for the convention on youtube. 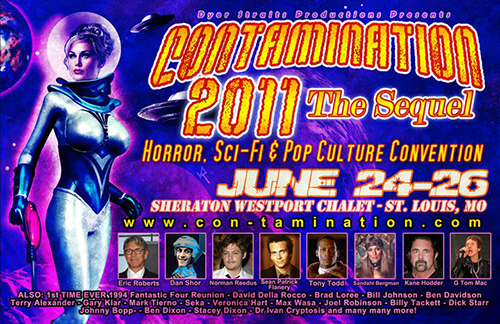