Syfy continues its move into original, unscripted programming with a cooking show: Marcel's Quantum Kitchen. During the recent Syfy Digital Press Tour, he gave the media an early look at what was to come.

Reality fans know Marcel Vigneron as Top Chef's season two runner-up, the "foam guy" with the big ego to match his big hair. He was back for a polarizing turn on this season's Top Chef All Stars but was voted off during Restaurant Wars.

But Marcel is back in action as the star of his own reality show. Marcel's Quantum Kitchen centers on his new catering and party planning company. 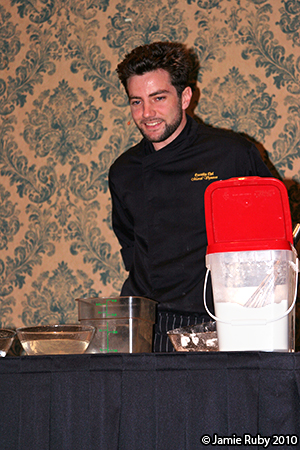 Marcel is a molecular gastronomist, a chef-chemist who uses unusual equipment and scientific techniques to create unique flavors and textures. Week after week, Marcel will dream up inspired menus for his very demanding clients. According to Syfy, some of the fabulous events will include "a futuristic four-course meal for Chrysler executives" to a "new twist on a luau for one of the nation's most renowned surfers."

In October, Marcel gave journalists a taste of what's in store with a Harry Potter-themed luncheon in Orlando, Florida during the press tour. Because many of the specialized ingredients are not available in grocery stores, Marcel brought his powders and potions with him. The menu included a Scotch-style "dragon's egg," frozen popcorn ("dragon's breath") and a tasty pumpkin milkshake (both made with liquid nitrogen), and a "spherified" butterbeer "snitch." If he could whip all of this up in a hotel ballroom, imagine what this mad scientist can do in his own fully-equipped kitchen/laboratory! 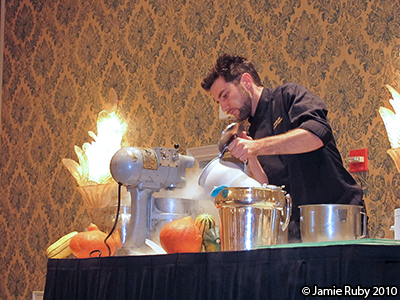 Syfy unveils a new reality series, Marcel's Quantum Kitchen, featuring molecular gastronomist Marcel Vigneron, one of America's most notorious chefs on the cutting edge of the culinary field. The new series debuts in 2011 on Syfy. 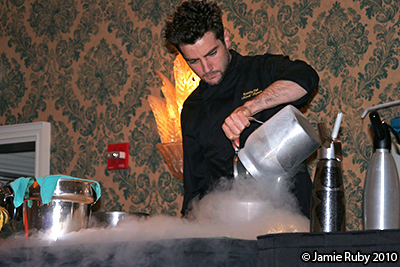 At just 30-years-old, Marcel has already made a name for himself with his polarizing turn as the season two runner-up on Bravo's Emmy-winning Top Chef and as the head chef at Los Angeles' hottest new bar/ restaurant, Bar 210. Marcel is constantly reinventing himself with cuisine, never preparing food the same way twice. 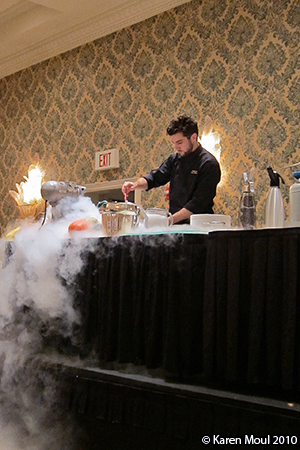 Marcel has a lot to prove -- his reputation in the restaurant world is that of a seasoned molecular gastronomy chef extraordinaire, but he is still known to scores of Top Chef fans as a young and talented chef with an oversized ego and coiffed hair. He is stoic and serious in the kitchen, and watch out if someone pisses him off or doesn't follow his lead. His passion for food is unparalleled. He's an ingénue and food perfectionist who struggles with the belief that he may be too big for his current kitchen, but not quite big enough to run a restaurant of his own.

In the kitchen, Marcel is a leader, but in the real world, he's still trying to find his place. Newly single and still new to Los Angeles, Marcel's best friends are his co-workers. Working in a restaurant is not just a job; it's a lifestyle. Marcel works at one of the hottest restaurants in the city and serves up mind-blowing culinary confections for celebrities every night. He's a liquid nitrogen-toting rock star with a loyal following. Marcel also knows someone in the kitchen of nearly every restaurant in Los Angeles and gets VIP treatment at all of the legendary nightclubs he frequents. He works all day, plays all night, and catches up on sleep on his day off. 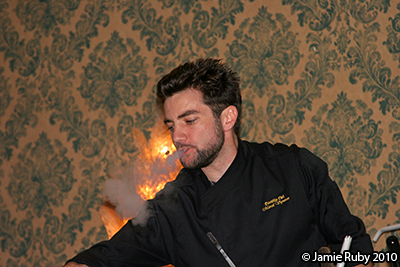 But now, Marcel is facing a crossroads in his career. Should he stay at the successful Bar 210, start his own catering business or become a private chef? Regardless of his next move, he wants to continue to push perceptions and the boundaries of food preparation by introducing molecular gastronomy to the public.

Marcel's Quantum Kitchen follows Marcel as he begins to explore the potential next phase of his career. In each episode, Marcel will be hired by a demanding client to produce and pull off extraordinary events and celebrations. Based on the clients' requests, Marcel will have to dream up a menu for the event, from a dinner party for extreme sports enthusiasts to a "dinner in the sky" themed-party literally held in mid-air. He and his team of party planners and sous chefs will oversee the entire production, tapping the depths of their imagination and culinary talents to brainstorm everything from the decor to a delicious menu that emphasizes Marcel's unparalleled brand of molecular gastronomy. Will Marcel continue to out do himself?