Syfy has partnered with online apparel retailer Her Universe to create a line of women's clothing, jewelry and other items based on Syfy properties. Syfy President Dave Howe announced the partnership this month at the Syfy digital press tour in Orlando. "From a brand perspective, it sends the right messages about what we want to stand for, which is a business that is for everyone with platforms that reach out to everybody. It's very exciting."

Ashley Eckstein, founder of Her Universe, is best known to fans as the voice of Ahsoka Tano on Star Wars: The Clone Wars. She launched the company this summer with the first line of Star Wars apparel designed specifically for women. "In the past," said Eckstein, "a lot of [science fiction-oriented] merchandise was created for women more as an afterthought. They just took an image, slapped it on a pink T-shirt, and said, "Oh, the girls will buy it." And that's not what we want. We want some of the same cool images, just put on a really flattering V-neck."

"Almost half of all Syfy fans are women." she continued, "and they weren't giving us anything to buy."

Currently, Her Universe aspparel is targeted to a broad age range, with sizes ranging from extra small up through plus sizes. "It's definitely not a junior's line. Our items are fashionable and fitted but pretty true to size." She plans several new Star Wars items for Christmas, including a set of Boba Fett underoos.

The panel also discussed other aspects of Syfy Ventures, which are available in the previous article. Eckstein answered questions for journalists at the digital press tour, which can be read in the full transcript below. Please also read the press release at Her Universe.

MARK STERN: Good. The other thing I know we want to talk about, and then we are going to open it up to your questions, we obviously have a very avid female fan base; in many cases, if not evenly split, sometimes more women, actually, for our shows. How are we going to be furthering that with Syfy Ventures?

ALAN SEIFFERT: Yeah, it's been a really area for us. As Dave said, we look at various categories. We look at the gaming, and we look at kids. But one big area for us is also just how can we end up really attracting a key part of our audience? And we actually now would like to announce we're partnering up with a group called Her Universe, which is a very exciting apparel company. And they will, with us, under the Syfy gear brand, be offering up pretty exciting original, very cool-looking apparel, jewelry, and really fan-girl-based items. And, you know, I would actually like -- if this is okay with you, Mark, I'd actually like to have all of you meet Ashley Eckstein, who is the founder of Her Universe, who can talk a little bit about this exciting project. Ashley.

CRAIG ENGLER: And who just happened to be waiting outside, mic'd up.

ASHLEY ECKSTEIN: Hi. Thank you. I'm so excited to be here.

MARK STERN: What a surprise. I wasn't expecting that to happen at all.

CRAIG ENGLER: I am shocked that you're here. 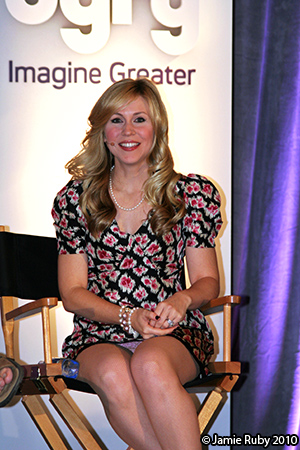 ASHLEY ECKSTEIN: Thank you. Thank you. Yes, we are so excited to be partnering with Syfy Ventures. We are a fairly new company. I do the voice of Ahsoka Tano on Star Wars: The Clone Wars. And this past summer we launched our business at San Diego Comic-Con, and we started the first Star Wars merchandise line just for women. We want to make girls chic from head to toe. And we have apparel, jewelry, accessories. And almost half of all Syfy fans are women.

ASHLEY ECKSTEIN: And they weren't giving us anything to buy. Last time I checked, the girls are the ones that are spending the money.

So I've spent the summer at conventions meeting the girls. I actually go to the conventions at the booths. And so many girls have been begging me for Syfy merchandise. So I'm really excited to announce this today.

DAVE HOWE: I think from a brand perspective, it really does send out the right messages about what we want to stand for, which is a business that is for everyone with platforms that reach out to everybody. And licensing and merchandising and gear in particular that reaches out to everybody, it's very exciting.

ASHLEY ECKSTEIN: Yes. That's the biggest misconception is that Syfy is not just for the men, it's not just for the women, it's for everyone. And that's what we're trying to say. We don't – we didn't start Her Universe to start a company that says, "Girl power. Syfy is just for the women." It's not. It really -- it transcends gender, and you guys do a great job with that at Syfy. And we're looking forward to creating some great product together.

MARK STERN: Cool. All right. Well, I think we should open up to you guys for questions.

QUESTION: Talk a little bit more about Her Universe. What age group is it for girls? Is it for young girls? Older girls?

ASHLEY ECKSTEIN: Right now it's mostly for tweens and up.

ASHLEY ECKSTEIN: We are definitely looking to expand to kids soon. Right now we have a range of extra small through plus sizes. That's something that's really important to me, is that women come in every shape, and every shape is beautiful. And so it's definitely not a junior's line. It's -- our items are fashionable and fitted but pretty true to size. And that's something that's very important to us, and we're going to carry on with the new line as well.

ALAN SEIFFERT: Let me also comment that we have the luxury of being very selective about who we end up partnering with. And when we really started to look at, Ashley's company -- and if you have a chance to go to Syfy.com, you'll see some links there. But Her Universe is really approaching this in a very smart way. And more importantly, when we really did our kind of informal feedback, I mean, women love your stuff. And I think that also, for us, was really key because our audience cares about it. And I think that some of the ideas that we've been talking about for Syfy are extremely exciting. I think to Dave's point, it really fits with our – with our new brand perfectly.

ASHLEY ECKSTEIN: And if I can just say, what we've really tried do, a lot of women want the same images, kind of the same type of merchandise the men have, just on female garments. And in the past a lot of female merchandise was created for women more as an afterthought. They just took an image, slapped it on a pink T-shirt, and said, "Oh, the girls will buy it." And that's not what we want. We want some of the same cool images, just put on a really flattering V-neck. And that's what we've tried to achieve. And the biggest compliment is we've had several guys come up and say, "Hey, can you start His Universe and put that same image on a guy's shirt?" The guys have so many amazing products, and we're just here to give them to the gals.

CRAIG ENGLER: I have to say I was walking the floor of New York Comic-Con, and I totally didn't realize that you guys were there. And their booth was right there, and I walked in and introduced myself. And the first thing I thought is "I want one of these shirts for men." They had a great, sort of old-school Star Wars T-shirt, but you could just tell by looking at it, it was of a certain quality and a certain fit that you don't get a lot of times. So I was instantly -- I'm all for His Universe.

MARK STERN: Craig, I'm sure you could make that work if you really --

CRAIG ENGLER: I can't. I just have to lose, like, 2 pounds, and then I can fit into one.

QUESTION: I just want to say I think baby stuff might be a good little venture for you too because my daughter, since I'm a big TV nerd, got, like, "Scully is my home girl" and, like, "Frakin' awesome diaper" --

QUESTION: Well, the actual question was, after I pitch your baby clothes --

-- is your stuff going to start to just -- I mean, you have, like, a Star Wars line right now, and I'm sure you're expanding constantly. But are you going to be doing kind of seasonal things, like where you'd actually do, like, "Oh, this is our spring line, and this is our fall line" kind of a thing?

ASHLEY ECKSTEIN: Yes, it will. We have a couple items come out for the holidays for Star Wars. And one in particular is a Boba Fett underoo set.

I'm totally on board for that.

ASHLEY ECKSTEIN: So but yes, we do plan to gear it towards seasons. And also, as you see in fashion , every collection may have a different theme. And I hope to achieve different themes in our collections. So it's something that I'm definitely trying to do.