Tonight season one of Syfy's hit series Defiance comes to a close. Recently Tony Curran, who plays Castithan Datak Tarr, talked to Jamie Ruby of SciFi Vision in an exclusive interview, which part one of was published. During that time Curran discussed some of the events that take place during the last few episodes of the season. 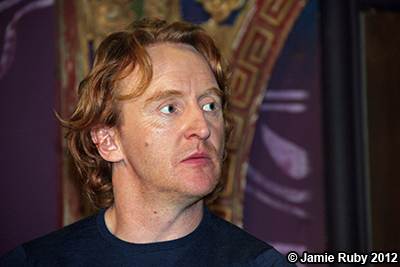 "...But it ends up we touch on that a little bit and why, and the reasons for his father not leaving and the reasons for Datak leaving; they're very different, as you probably tell. Datak appears to be somewhat spiritual or sort of very loyal to his cultural background, but in many ways, it's not for the good of his culture, but it's for the good of him, for his family."

Curran also recalled a moment with father and son and talked about the upcoming wedding between Alak (Jesse Rath) and Christie (Nicole Muñoz). "So there's an interesting scene between me and Jesse who plays my son Alak. There's a bit of a ceremony coming up in one of the episodes, where they're trying to get them married off. Which of course Datak is not happy about, but at the same time, Stahma (Jaime Murray)'s sort of cunning and [wise] and she's poured some good ideas in his head, and the idea is that with this joining of family, in the end it could be beneficial to the Tarrs, although painful that may be."

There is even more backstory coming up in the form of flash backs. "There're some flashbacks coming up as well that are quite interesting...there's some backstory where there's stuff like Rafe McCawley 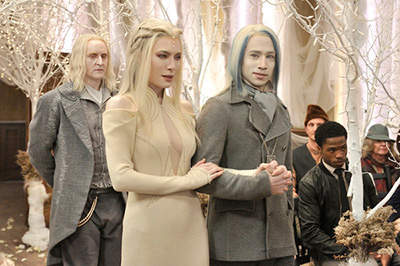 (Graham Greene) and Datak Tarr and how they weren't always enemies, which is quite interesting. And it kind of touches on that, but then it leaves a huge gap from the end of the flashback to where we are present time in 2046 so you're left kind of, your imagination can run wild. And obviously the writer's room can run wild, and the future as well, and hopefully give us some interesting and juicy moments, because I didn't have much to do with Graham Greene, unfortunately, but when we did work together we always had a lot of fun and it was, you know, two old heads locking horns as it were."

The actor also touched on the upcoming election. "There's an election coming up...and people want to start voting, and who are they going to vote for, and it depends who's going to go up against Amanda; it might be Datak, you know, it could very well be Datak. Definitely not in his wheelhouse, politics. He's trying to be a little bit more subtle in his approach, you know. It's like some people are pliable and they sort of bend. Datak just tends to snap.

"But I think he's definitely street wise and he's pretty down to that, but when it comes to the sort of more so called political and sort of more honest sort of politics, then I don't know if he's very well versed in that area. But I think he's learning, and I think with Stahma, you know, gating him and helping him along - because the thing is, it's interesting with [Stahma], because she's a woman, because of where she came from in this sort of patriarchal society, this powerful matriarch can't dominate in many ways, but she can be very domineering with the use of her husband. So the two of them - you know, the temple can't stand up without two sets of pillars, one on each end. 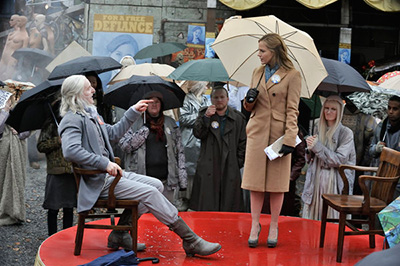 "But...there is an election coming up. And then if they do get into power, the Tarrs, what are they going to do then? And even then there're some other visitors that come to town which really puts a spanner in the works of trying to get into the White House or whatever you want to call it."

Each opponent has great campaign posters. "There're some pretty cool posters hanging about – "a tough man for a tough job," there you go. It's got a kind of ring to it. So he's running for mayor, but there's a moment...if he does become mayor, it's kind of like, be careful what you wish for. It's like, "Okay now, if I'm in this position, what do we do now?" I think there may be a moment of a look on Datak's face, you know, maybe Stahma knows what she's going to do, but Datak is like, "Okay we've got to here, and now what do we do?" "

I asked Curran who would win in a fist fight, Datak or Nolan, and he said fans would actually get to see that, but didn't give away who will win. "You're going to find that one out...all I will say about that, is "he who laughs last laughs longest..." 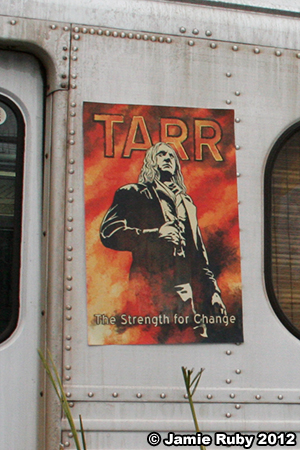 "There's a pretty awesome fight coming up with me and him that's just like in the rain, and it's like we kick the shit out of each other. It's pretty intense...who doesn't want to see the big boys go head to head? It's one of the most enjoyable scenes I shot actually. It's just like a bar brawl. It's like, there's a film called The Quiet Man, with John Wayne - a fight through barns, a fight through pubs. It's not as long as that fight, but it's got a similar intensity and it's sort of, you know, it's not nice. It's like they're fighting with chains; they're fighting with anything they can get their hands on, you know, just pummeling each other."

Be sure to watch Tony Curran in the season one finale of Defiance, tonight on Syfy.
Twitter
BotonSocial por: SocialEmpresa
Category: Interviews